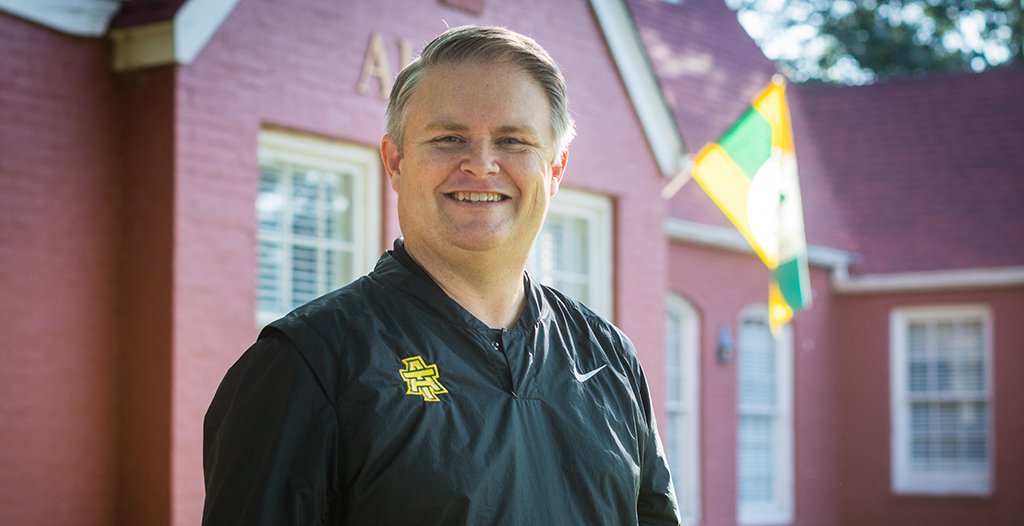 If you know ATU sports, you’ve probably heard his voice giving play-by-plays. If you follow Jerry the Bulldog, you can credit Jerry’s care to him. He’s the Director of University Relations at Tech: Sam Strasner.

Sam is 42 (43 on September 27, if you want to wish him a happy birthday!) and grew up in Russellville. He is married to Heather, and together they have a son, Seth. His parents are Jeanie and Steve. “Being Seth’s dad is the best opportunity I have to pay forward what my parents did for me,” he said.

He has two brothers, Scott with wife Jodi and daughter Sophie, and Stan with partner Sabrina. Not to be overlooked, he also lists in his family his roommate and co-worker, Jerry the Bulldog!

1. What is your favorite book, and why?

“Late Innings” by Roger Angell. It speaks to how I feel about baseball and was one of the factors that hooked me on writing as an interest.

Dog. I’m a people pleaser, too.

3. What is your favorite music genre and artist? Why?

There’s a sound that is the intersection point of country, blues and rock and roll. Anyone who can get as close as possible to that intersection point — Willie Nelson, Hank Williams Sr., Creedence Clearwater Revival, Chris Stapleton, Al Green, Kacey Musgraves, Linda Ronstadt, Eric Church, Ray Wylie Hubbard, Susan Tedeschi and Turnpike Troubadours have all spent significant time in that neighborhood — is going to be on my list of favorites.

4. If you could change one thing about the River Valley, what would it be?

Our collective, regional self-esteem and belief in what we can be. We have a tremendous geographic advantage as the midpoint between the seat of government for our state and the seat of commerce for our state. There’s no reason we can’t identify and maximize a niche that allows us to be a pivot point between those two population centers. We just have to put our minds together, figure out what it is and relentlessly pursue a shared vision.

5. Pizza, tacos, cheeseburger, or fried chicken? Any particular reason why?

6. What is your favorite quote? Could be from an inspirational person, could be an original.

“And the days that I keep my gratitude higher than my expectations, well, I have really good days.” — Ray Wylie Hubbard

7. What one person (past or present) you’ve never met, would you like to spend a day with, and what would you choose to do with that time?

Ben Hogan. Play 18 holes at Augusta National Golf Club. There would be long periods of completely comfortable and peaceful silence. By nature, two non-small talkers. I’d try like heck to beat him and lose by a very, very wide margin.

8. What is your five-year goal from today?

I want to keep improving as a play-by-play broadcaster. It’s a hobby I fell into more than 20 years ago largely by accident and without formal training. Even though I can’t see them, I feel a connection with the members of the audience and relish our opportunities to have a conversation about Arkansas Tech athletics. We’ve experienced some great moments together, and I hope there are many more in our future.

9. What is your favorite memory of the River Valley area?

January 23, 2010. The Golden Suns basketball team had a top-10 match-up with Delta State and the Wonder Boys basketball team played its first home game as the No. 1-ranked team in the nation at the NCAA Division II level. There were so many fans in attendance they had to lock the doors to Tucker Coliseum to maintain a safe headcount. There have been similar occasions, but I’ve never seen this community turn out to support and engage with Arkansas Tech more than it did that night. It was special.

10. What is your ‘Friday Night’ go-to in the River Valley?