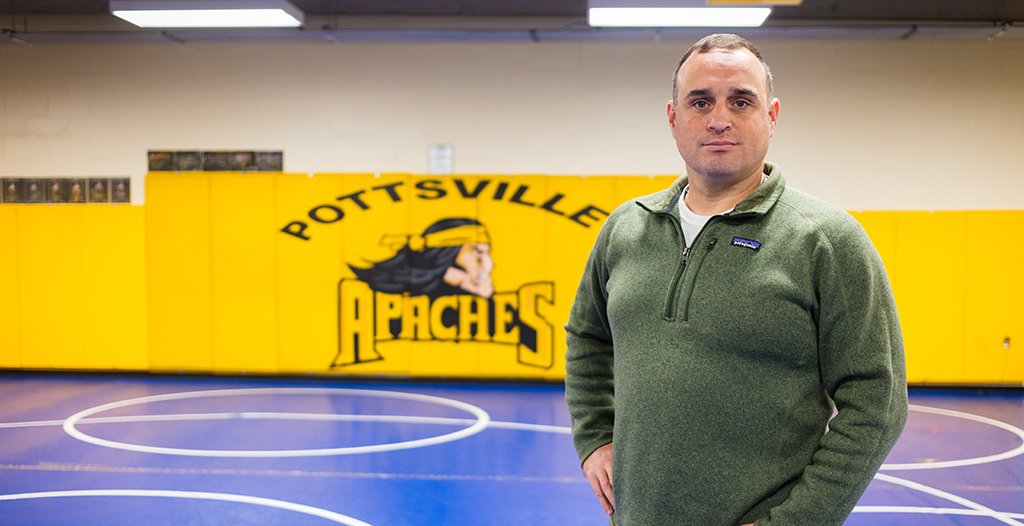 At the age of 41, Anthony Moats is almost settled into his retirement career. Having joined the Active Army as a Medic, he served in the 82Nd Airborne from 2001-2005. Deployed to Operation Enduring Freedom in 2003, upon his return, he left the Active Army and joined the Arkansas Army National Guard in 2005, and became a full time Recruiter for Pope County. In 2010, Moats was assigned to be a Drill Sergeant for the Recruit Sustainment program. In 2018, he became the team leader for ten recruiters in the River Valley and in 2020, was promoted to operations Sergeant Major for the recruiting Battalion of the entire state of Arkansas.

Moats grew up in Danville but has been settled in Pottsville since 2005. He is currently attending ATU, obtaining a health and physical education degree. Upon graduation, he hopes to teach and continue to coach wrestling.

Dogs, I love the fact they are as loyal as they are. They think that you are part of their pack and they react to how you treat them. Dogs need people and cats hate everyone.

2. What do you think is the most positive aspect of living in the River Valley?

The people. The nicest, most caring people I have ever met live in the River Valley. It’s a great place to raise your kids.

3. What’s something no one would ever guess about you?

I love playing music. Before joining the Army I played in a punk rock band and worked at a local coffee shop.

4. What is your favorite music genre and artist?

Why? I have always had a different taste in music. I love pop punk. Not the new Machine Gun Kelly crap but the old school pop punk. Bands like the Descendents, Screeching Weasel, and the Ramones are my favorites.

6. Where is the one location in the River Valley you would tell a first-time visitor that they must go?

Go see the Tri Peaks. Mount Magazine, Mount Nebo and Petit Jean Mountain. You can see it all from those three state parks. The River Valley is beautiful, and these parks help you see this beauty in its entirety.

7. What is your favorite quote? Could be from an inspirational person, could be an original.

“There are such things as stupid questions. They are asked by stupid people.” My drill sergeant in basic said this all the time. It taught me to keep my mouth shut and listen. If I would just listen, I would find the answer and not ask stupid questions. I applied this to my life. Educate yourself and don’t ask anything so that you can find the answer for yourself. It made my life much easier. I wish more 18 year-olds would get this advice.

8. What one person (past or present) you’ve never met, would you like to spend a day with, and what would you choose to do with that time?

George W Bush! President Bush has that aura about him. He seems like a cool guy. I would like to just sit at a bar and have some drinks. I would just like to pick his brain about how he sees the world.

9. If you could choose to be anything, what would that be and why?

I could not dream of being anything more than who I am. I am retired at 41, I have 3 beautiful children and my wife is my best friend. Life has been so good to me. I have no wants or needs that are not fulfilled by my current life.

10. What is your five-year goal from today?

Five years from now I plan to only be simply teaching at Pottsville and coaching wrestling. That would complete my midlife and give me something to keep me busy in my military retirement.