Warriors Keep: Filling the gaps between surviving and thriving 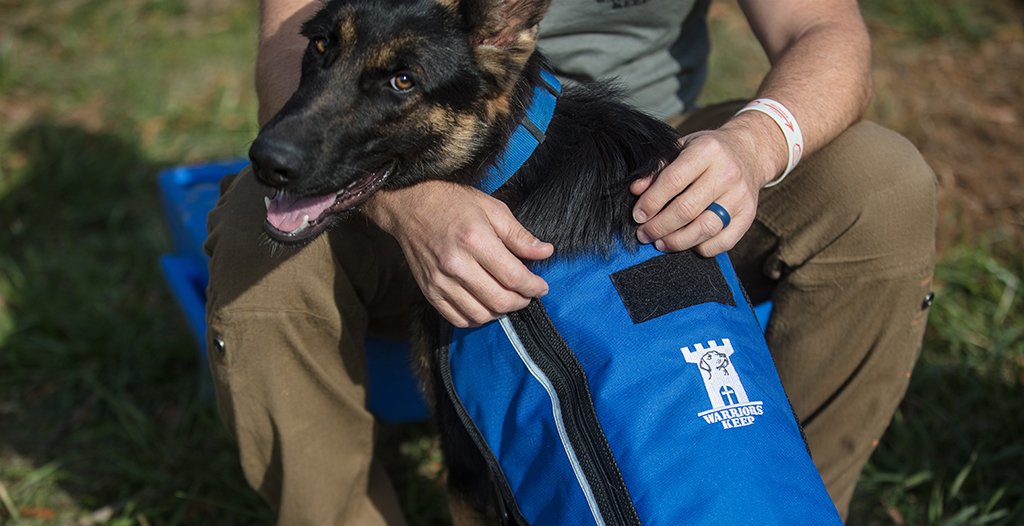 Darren Pool says there is a huge difference between merely surviving, and truly living.

Helping military veterans get beyond surviving and back to truly living is the foundation for his faith-based ministry, Warriors Keep.

A 22-year military veteran himself, Darren retired in 2019. Since his retirement, Darren and his wife, Wendi, have established Warriors Keep as a veteran’s outreach program.

Darren describes the ministry as an umbrella-type organization, one that helps veterans address any needs they might have. In that way, Darren said, Warriors Keep can perhaps help “fill the gaps” that might exist in other programs.

“I have guys call me all the time, with questions about their VA benefits, how to apply, how to appeal, and I don’t have the answer for all that, but I point them to the people who do,” Darren said.

A primary need identified by Warriors Keep that receives the most attention from Darren and Wendi is their service dog program.

In a nutshell, this is how the program works: Warriors Keep finds dogs, many times rescue dogs, and pairs them with veterans. Those veterans, in turn, work with trainers to train their own service animals.

Groups being trained are kept to about four animals per training cycle, with the next cycle planned for January.

As part of that program, a facility is under construction on Darren’s property. It is being built mostly with volunteer labor and when finished, will house the service dog program, providing space for training along with a kennel area for the dogs. 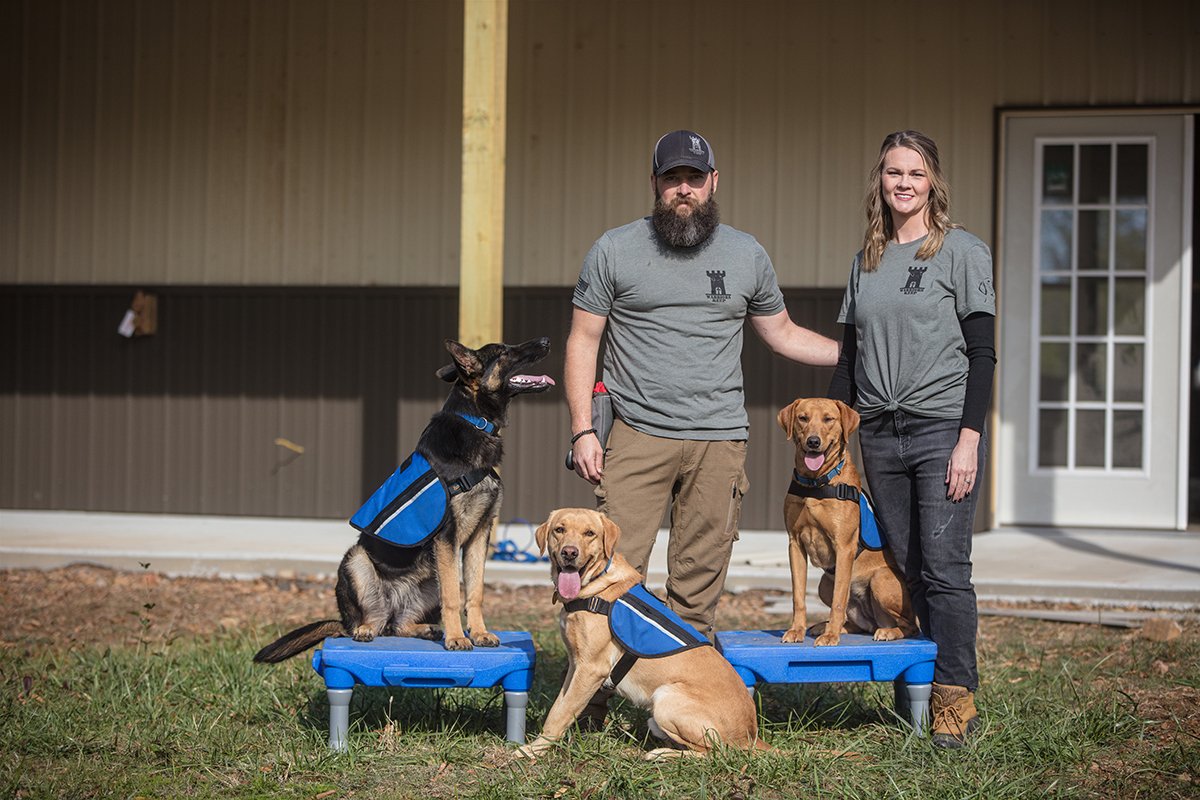 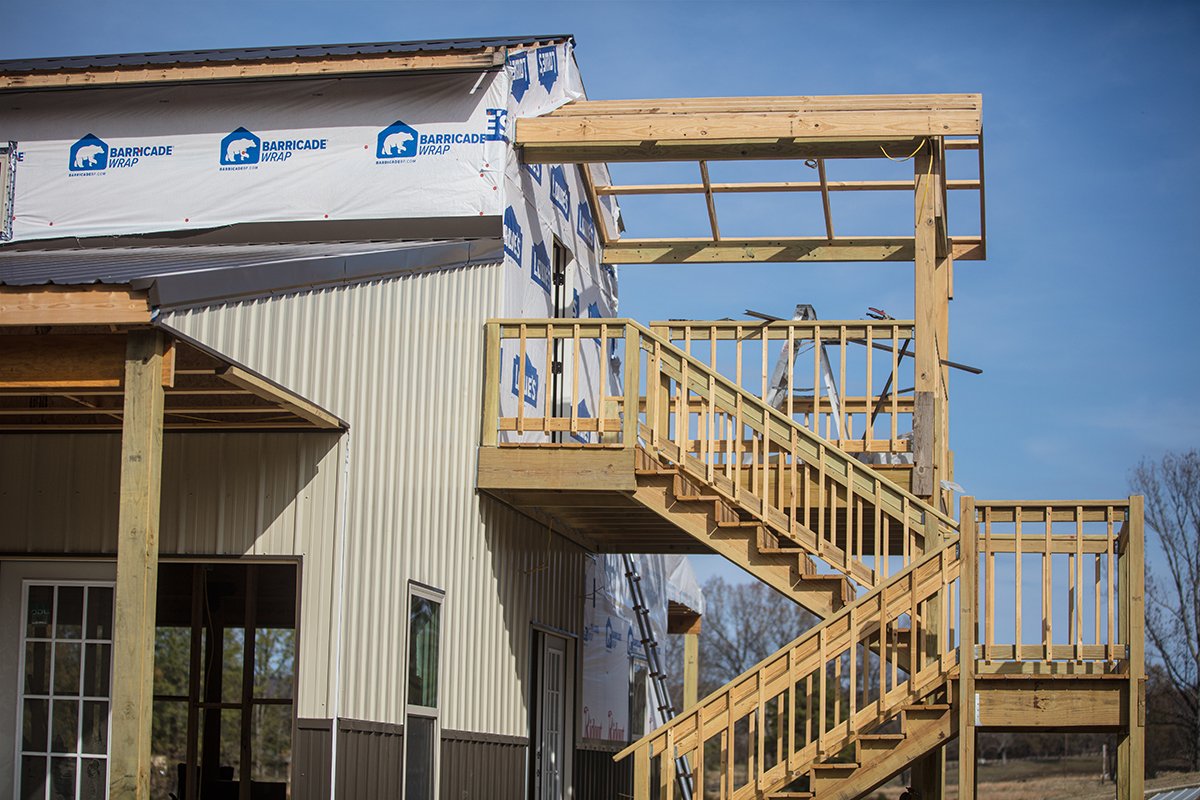 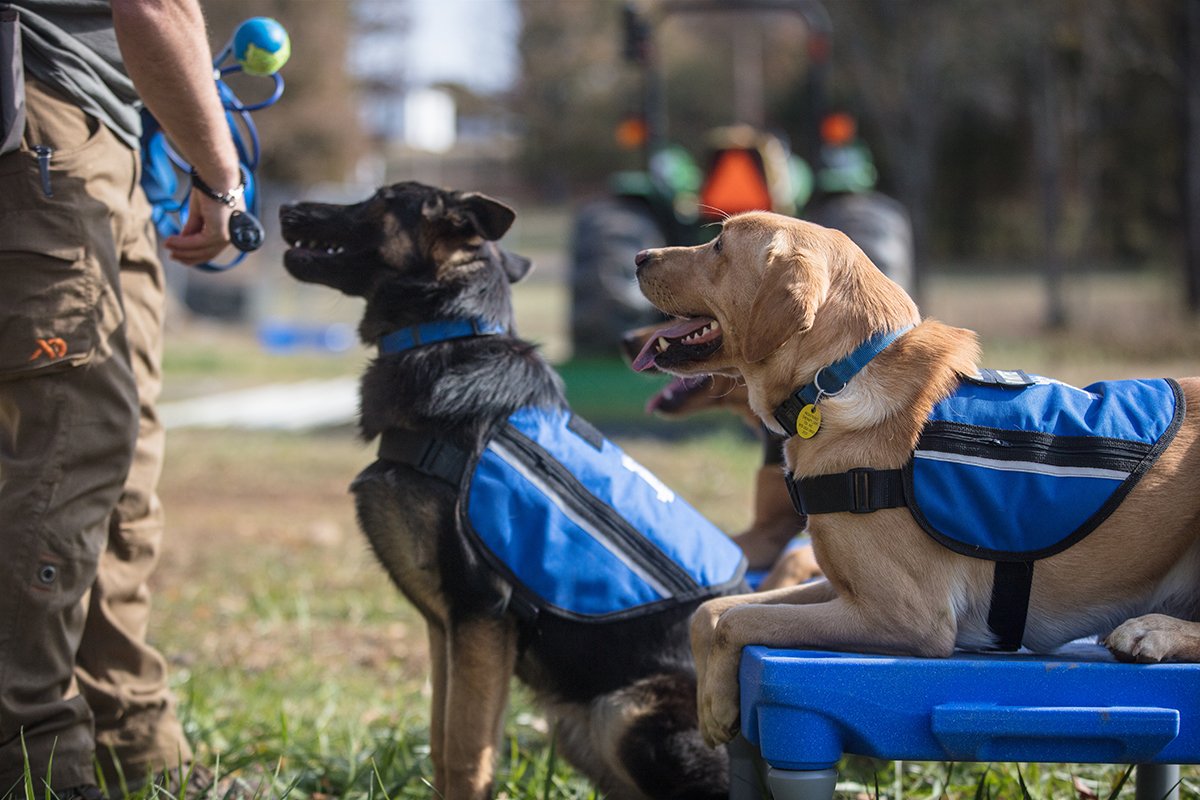 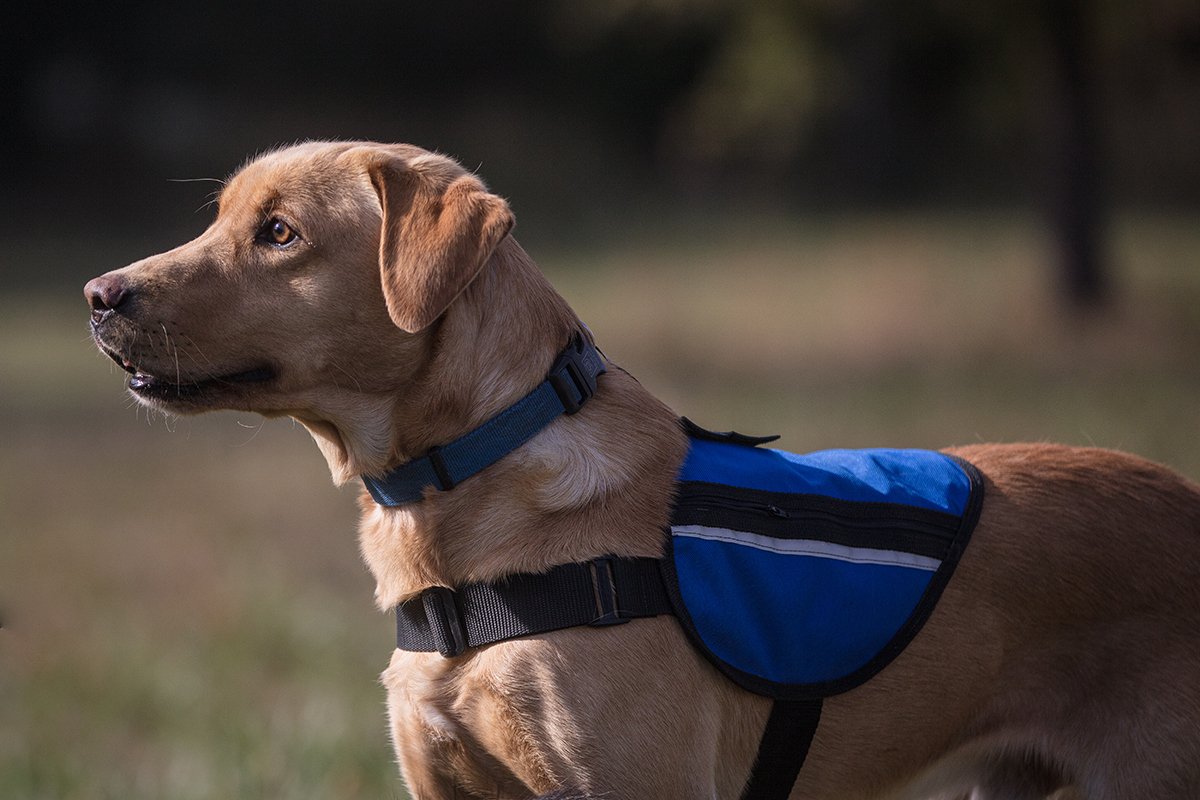 A program like this is important, Darren said, because when a veteran is partnered with a service animal, that partnership “can be the next best step in their healing process.”

That importance of that healing process cannot be overstated, Darren said.

Yet, there are many veterans who, through Veterans Administration benefits and retirement income, are merely surviving, and the healing process is incomplete, he said.

“I feel like part of our mission is to get them reintegrated into society, at whatever level they feel comfortable,” which may mean simply getting back to doing the types of things they did earlier in life.

One of the ways that can be accomplished, Darren said, is through the service dog training. It forces the veterans in the program to “engage with the world” through the weekly training sessions.

Ideally, those veterans who go through the training then want to stay with the program, perhaps becoming mentors who help the next class of veterans, or volunteering with the program in some other capacity.

That is what Darren said he hopes to see as the program moves forward, and the Pools have other plans, as well.

Thinking about the future of Warriors Keep, Darren said he has had veterans approach him about expanding services, such as setting up an outdoors program that might involve a “marching for mental health” component and possibly camping trips.

Darren and Wendi are both therapists, with Darren having completed coursework at Arkansas Tech-Ozark after retiring in 2019. They hope to make good use of their expertise in that area with other initiatives in the future.

“We hope in the next couple of years we can start a program — we don’t really have a name for it yet — that would be a warrior wellness program to provide therapy for veterans that need it. For whatever reason, a lot of veterans won’t engage with the VA but they still need help physically and occupationally to get up off the couch,” Darren said.

“God’s going to bless it (Warriors Keep). I truly believe it and he’s going to get glorified at the end of it, and that’s where we hope this leads to.”

Currently, however, much of the interest in Warriors Keep has been through word of mouth. Darren has spoken to a number of veterans organizations and civic clubs since in the last year about Warriors Keep in general, and the service dog training, specifically.

Darren knows this next class won’t meet all the needs that exist locally for service dogs for veterans. In fact, he said he expects to have at least 20 applicants for dogs by the time the next class is selected.

“I think that’s a testament to the need for what we are doing,” Wendi said.

“We haven’t had to advertise, really. They (veterans) are seeking it and we have had several family members who have sought out the service” for veterans in their families, she added.

Veterans are chosen by a committee that looks at the need each veteran has, rather than on a first-come, first-served basis. Those selected also will have been recommended by either the VA or a primary care physician as a candidate for a service animal. 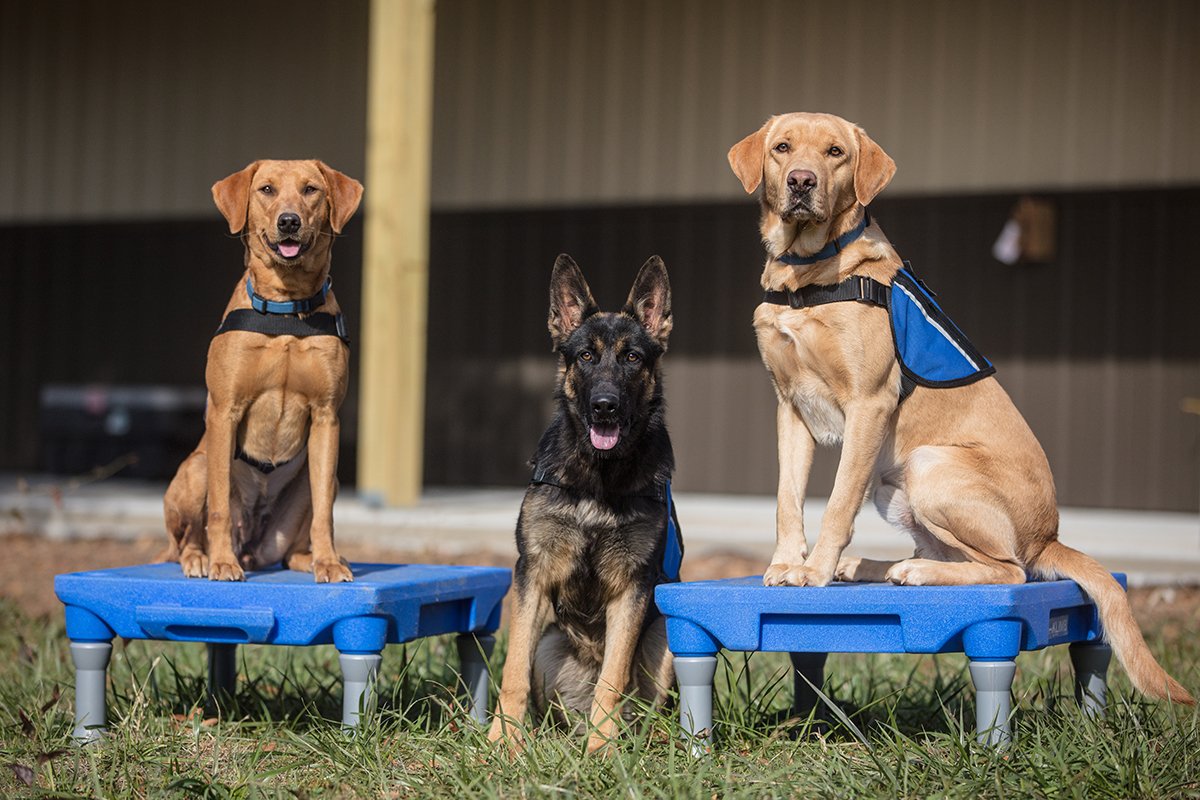 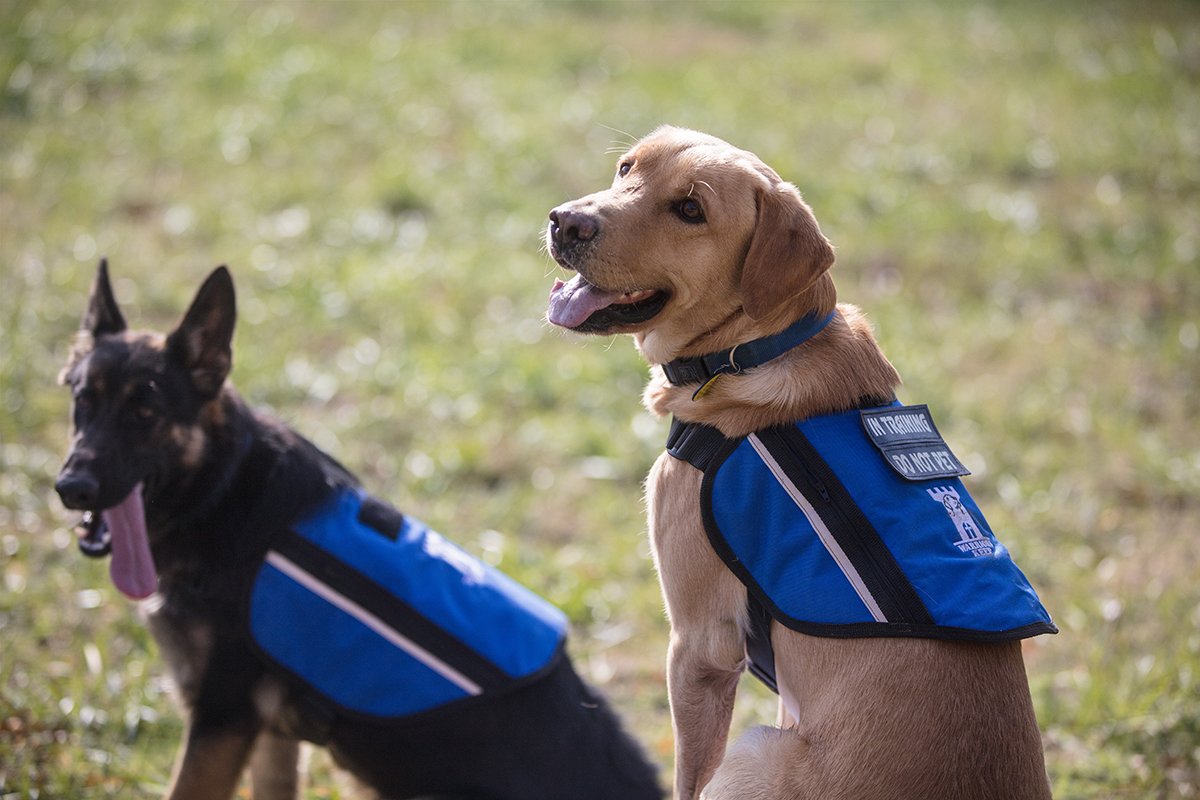 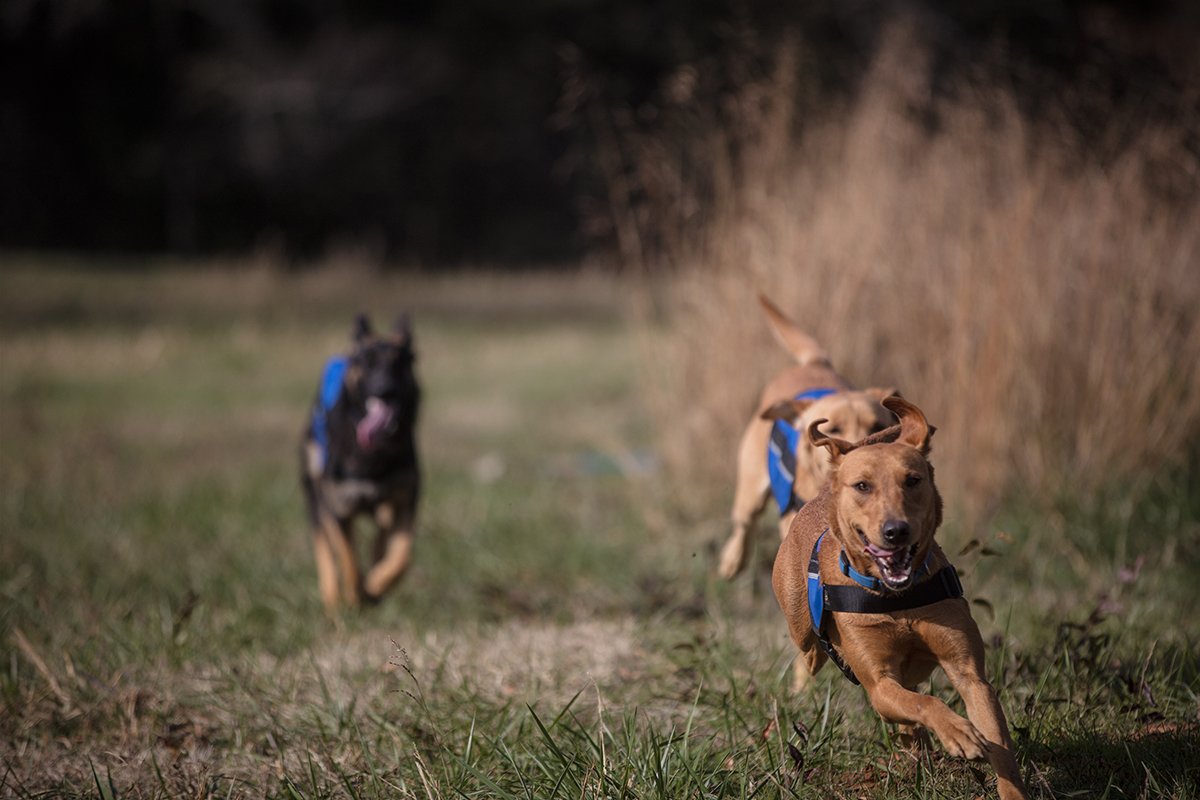 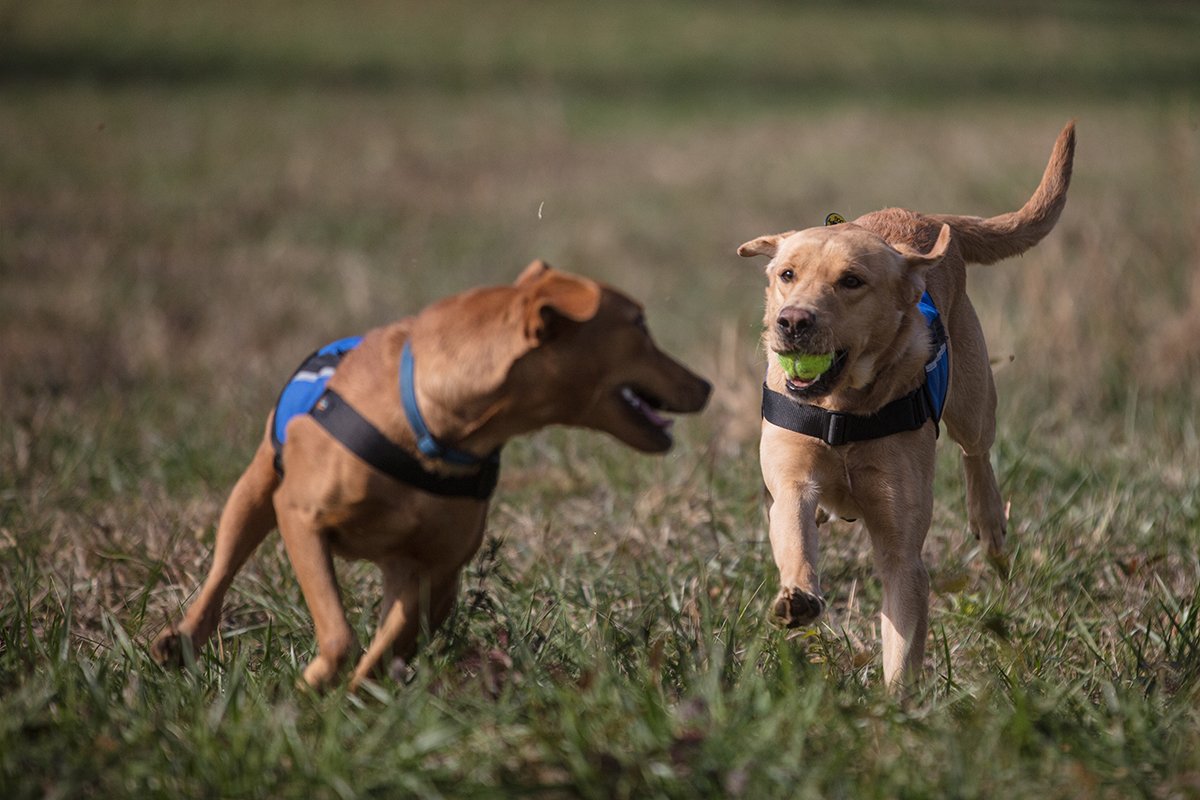 The genesis of the ministry began before Darren’s retirement. He had seen many fellow veterans who, once they retired, seemed to lose purpose for their life. Those retirees who were thriving, however, had a purpose. They had a reason for getting up every morning, Darren said.

“So I knew automatically I was going to find something to do. At that point I started praying and I felt like God was telling me he wanted me to minister to the veteran community in some way.”

At that same time, Darren underwent numerous surgeries and found himself doing months of physical therapy. He remembered thinking, “I can do this … I can help veterans.” As a result, about a year before retirement, Darren looked at the physical therapist assistant program at ATU-Ozark.

After retirement and during that first year of the program, “my love for dog training and all of that came together.” He recalled studying the effect of service animals, “doing two or three really in-depth research papers that really got into the science of it.” That science, he said, clearly demonstrated the value of service doges, especially when it comes to helping veterans cope with PTSD. His research helped cement his desire to make service dogs a primary part of Warriors Keep.

As for the birth of the ministry itself, Wendi recalled having conversations with Darren, as he approached retirement, asking “what in the world would that (retirement) look like for us, well before any of this was even in our thoughts.”

Wendi teaches and is program chair in ATU-Ozarks’ occupational therapy assistants program, “so I think it helped us realize the opportunities that could be there” if Darren returned to school to pursue therapy. Combining a new medical mindset with the military mindset that already existed for Darren made him uniquely qualified as a resource for veterans, Wendi said.

“I just remember thinking, ‘this will make him so well rounded with what he can bring to the ministry.’ So I felt very excited about that. I also felt like God knows what we need and he knows how to give it to us.”

Plus, Wendi said, thinking about Darren helping veterans heal made her realize the ministry would be helpful to Darren, as well.

“I remember thinking how helpful this would be and how healing this would be for him, too, and how many things would help his mind, and his heart and his body.”

How important has Wendi’s support and involvement with the ministry been?

“I can’t even put that into words,” Darren said. “It’s meant the world to me. This (ministry) would not have happened without the support I’ve gotten from my family and my friends, and especially Wendi.”

The name of the organization came about while Darren was studying David in the Old Testament. Darren said he was struck by the “unfair advantage” David had in his life as a warrior.

“It resonated with me … this refuge in God that he always went to,” Darren explained.

In Psalm 18, David is talking about God being his strength, his shield, his salvation. Darren said he wants to help offer veterans that same type of strength through their ministry.

“I don’t want to hide it. It (Warriors Keep) is a ministry. Whether it’s a building or just a phone number, I want veterans to know this is a safe place and that they can find that unfair advantage in life through God, so that we can fill that God-sized hole that might be missing in them.”

However, veterans do not have to offer a profession of faith to be served by Warriors Keep, Darren said. He knows some veterans may have distanced themselves from churches and from organized religion. And while Warriors Keep is a faith-based ministry, “I do not want that to be a turn-off for veterans to come out here.”

At the same time, the program does offer veterans the opportunity to become closer to God if they so desire, Wendi added. That has already been the case.

Darren recalled that when work began on the facility for the service dog program, he called several veterans he knew, told them what was going on, and said “hey, if you want to help, come on out, and if you can’t, no big deal.”

Then, he said, “about a week ago we were out there working, about five or six of us, about 7:30. One of the veterans that had been out here weeks prior and helped for a day or two … he just showed up out of the blue.”

Darren greeted him with, “hey man, how are you doing?”

The veteran’s reply was, “Hey, I’m not doing good. I need somebody to pray with me. I didn’t know where else I could go, but I knew if I showed up here, there were going to be some men that would pull me to the side and pray with me.”

What does that story mean to Darren and Wendi?

“If I could say, ‘what do I want Warriors Keep to be,’ that’s Warriors Keep. That’s the refuge. If all else is going wrong, and they need a phone call or just a porch to sit on to drink a cup of coffee, then we’ll provide that, whatever that looks like.”