Shedding Illumination on the Dover Lights 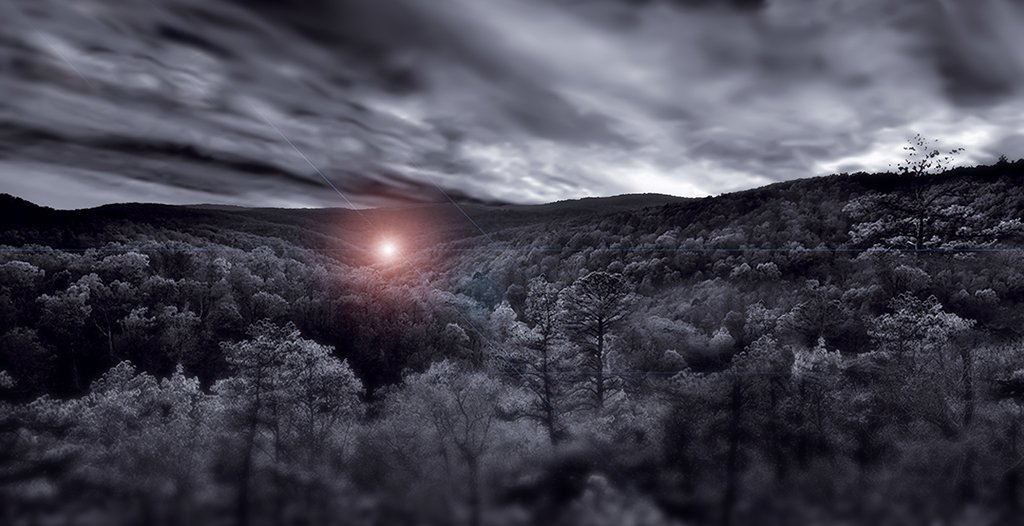 Way back in the Ozark hills where the country is rugged and wild, legends seem to hold tight. The stories of yesteryear are wrapped around the locals’ minds and into their culture like greenbrier growing around an old hickory stump. And, like the greenbrier, the tangles of the unexplained grow thicker as the years pass.

On a lonely stretch of dirt road north of Dover in Pope County, a legend has remained since sometime in the late 1800s. In this day and age of discovery it would seem that technology would eclipse any haunting folklore, but somehow the sightings and the stories survive.

The Dover Lights are a phenomenon that even to this day remains a mystery. The legend stretches back to a period before electricity, a fact that seems to fly in the face of the skeptic’s claims. While the lights themselves are baffling, part of the mystery is deciding which story regarding the origins of the lights are true.

Many believe there was a coal mine on the hillside and that the mine collapsed one day killing several miners. The lights wandering the hill are said to be spectral light resembling the carbide lanterns used by the miners to illuminate the mine while they worked.

One legend predating all others is that the lonely canyon is an old Native American burial site. Some think the lights are the spirits of tribal leaders trying to find a way to lead their people to the next life.

Perhaps the best, most detailed story told around the area is that of a doctor looking for the lost silver mine, and about the bad things that can happen when one takes something that doesn’t belong to them.

Back in the mid-1800s an elderly couple lived on this now-locally-famous hillside next to Big Piney, the creek flowing through the Dover Lights area. The wife became deathly ill and as she was too weak to make the journey out of the mountains, her husband rode off to town to bring back a doctor. The physician rode to the couple’s home to find the woman near death. The good doctor was able to save the elderly lady and stayed on for a few days, nursing the woman back to full strength.

The couple was very poor and had no money to offer the kind doctor. However, the husband was very good at making his own hunting supplies so he offered the only thing he had — one dozen rifle bullets. The young doctor agreed with this trade and left the couple to ride back home.

The years passed by and the doctor became very successful and wealthy. One day, as he was picking through his attic, he came across the bullets he had been given. His mind wandered back. He remembered the older couple and a time when the humble trade of bullets for his services was plenty good enough, he decided to polish the bullets and display them in his library.

As he polished, it became obvious that the bullets weren’t made of lead but rather of silver. He believed the poor old Hillbillies surely had no idea that it was silver used to make the bullets or they would have sold them and become rich.
Greed overtook the doctor as he planned to visit the couple and find out more about the silver. He also formed a plan to take away the silver from the ignorant, simple couple. The Doctor rode to the couple’s home the next day.

Arriving at sunset, he found two headstones standing side by side in the darkening forest behind the cabin. The old couple had long since passed away.

The doctor felt that the only way a poor man would have silver is if the silver mine were located on his land. He began searching the land the night with lantern in his hand. At last the doctor found the cache — but it wasn’t a silver mine. Instead, it was a crate full of silver bars hidden underneath the home of the hill folk. The doctor rode home that night with a few bars of silver, planning to return with a packhorse the next day.

But the doctor never woke up again, mysteriously dying in his sleep that very night.

Neighbors reported seeing two floating spheres of light slowly wandering through the dead doctor’s home. They also talked of hearing faint voices calling “Where, where is it?” throughout the night.

It’s told that to this very day if you stand at the overlook and call out “The silver is here!” that two lights will appear on the distant hillside. It’s said that they slowly make their way across the creek and up the ridge to where you stand…if you have the nerve to stand there.

The remote location and rugged terrain make the area around the Dover Lights difficult to explore. Several people have tried to find an explanation for the weird things that people see while viewing the hillside across the Big Piney from Treat Road. Among those are a group from southeastern Oklahoma and western Arkansas that specializes in making film documentaries. They have a television show called “On the Fringe.”

Justin Minor of “On the Fringe” tells about the crew’s experience while investigating the Dover Lights phenomenon.

“We made a trip to check out the Dover Lights in April of 2009 and we believe this may be the most well- documented case of this type of event ever recorded. The lights did everything that we had heard about except one — we never saw them move.”

“We have tried to rule out every possible cause. I mean every cause. We still can’t believe what we saw,” said Minor.

The first explanation is electric lights but Minor quickly dismisses this thought.

“There is no electricity in the canyon. While the Long Pool campground is below the lookout, it’s around a bend in the creek. You can’t see it from Treat Road. The campground is on the same side of the creek that the lookout area is as well, it’s not on the hillside where the lights are seen.”

“It can’t be reflections of stars or the moon. The night we were there was cloudy. There are no roads on the hillside so that rules out autos. I guess campers could get over there and you can’t rule out a hoaxer. But you tell me, it seems very unlikely that someone would camp there or be there to play a prank on whoever comes by for days, weeks… well, it’s been going on for decades. I’d say the odds are slim on it being campers or pranksters.”

The crew became even more convinced of paranormal activity verses a natural phenomenon when the light they saw exhibited some signs of… life.

“We got there at around 9:30 that night and a light was visible to us as soon as we looked down into the canyon. It started out as red and then became blue It was absolutely the coolest thing that we have experienced,” added Minor.
But the show was just beginning.

“The cameras picked up the light, as well as other lights, fading in and out that we couldn’t see with the naked eye. The bright light began to flicker after a few minutes so we decided to introduce stimuli. We shined a flashlight on it and it immediately brightened up. It was astounding,” he added.

The Dover Lights had a grand finale in store for the investigating crew as well.

“Before we quit filming, the bright constant light seemed to shoot a beam like a spotlight up into the sky. We could see it reflecting off of the mist and clouds.”

“Whatever may be the source of the Dover Light phenomenon, it is REAL. And yeah, we know the critics are going to rip this apart, they can have at it,” said Minor. “I know what I saw with my own eyes and it was the coolest thing I’ve ever witnessed.”

The skeptic will surely dismiss all of this and they should. What reasonable person would believe tales of spectral lights and spirits looking for their stolen silver? But, the strange happenings that occur in the shadowy forests along Big Piney creek continue. Perhaps the best thing to do is let it be. Do we really want answers? Maybe some things are best left alone… like bars of silver hidden deep in an Ozark hollow.

Editor’s Note: Want to learn more about paranormal activity and local haunting lore? Information on the Arkansas Paranormal Research Association is available online at www.arkansasparanormal.net. Billed as “a diverse group of open-minded and dedicated paranormal researchers,” members seek the truth in the paranormal, but focus on “helping people who have a need for assistance and knowledge.” Events, education, research trips, gatherings and resources are available to interested individuals.