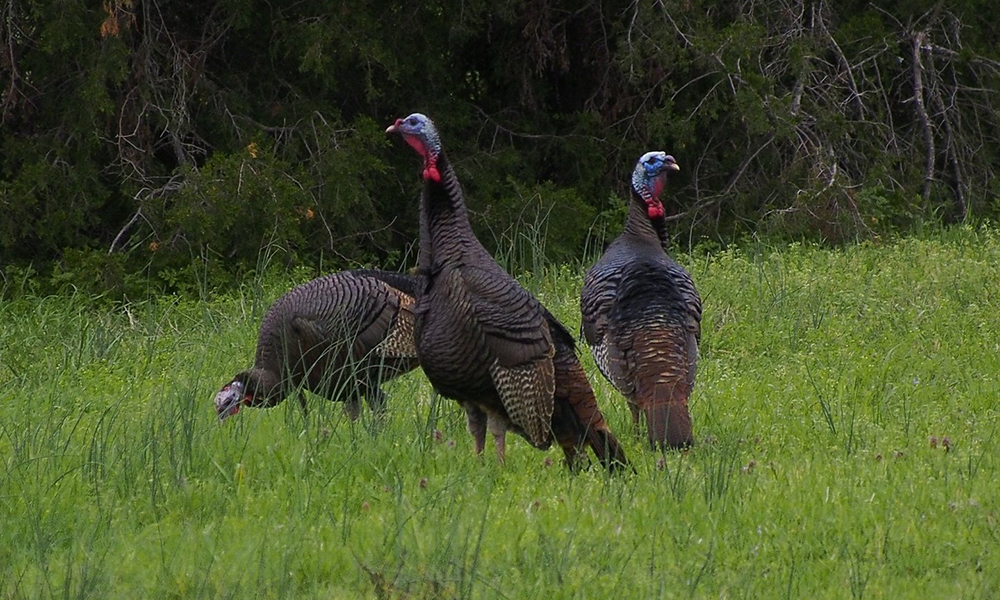 Turkeys…That word is muttered with respect, whispered with urgency and grumbled with frustration more than any other word in my vocabulary come springtime. Turkeys are on my mind with the first performance of chorus frogs in February until late spring’s bugs and humidity close the chapter on another season. To say they are an obsession is an understatement, but I haven’t really figured out the reason.
They are, of course, beautiful birds, and gobblers in particular. This isn’t a slight toward the hens. Hens are beautiful in a different way. The contrast in physical appearance is all about ensuring another generation of turkeys. Hens are a mottled buff coloration. It’s a pattern geared toward concealment because hens are tasked with incubating a clutch of eggs right on the forest floor. The best defense against predation is to disappear, and if you’ve ever come across a hen turkey trying to hide you know she does a dang good job of it. Gobblers, on the other hand, are working toward the opposite goals. They want to be noticed by the hens. Savage red wattles and a snow white head look too vibrant to be real on a strutting gobbler. And then he has those iridescent feathers. In the shadows a gobbler’s feathers look dark as April storm clouds, but in the sunbeams… oh my… The colors are simply dazzling. I distinctly remember a gobbler encounter from more than a decade ago when my first thoughts were that the bird was on fire. Brilliant bronze and red leapt from the turkey like flames as he stepped into sunlight. The scene was so spectacular I forgot to raise my gun.
Maybe it’s the voice of a wild turkey. The clucks, purrs and yelps are cool. And turkeys make some other lesser known calls; a secret language known only to the turkeys, the trees and the dedicated woods-wise person spending time in their company. The gobble of a lusty tom is perhaps the ultimate song of southern wilderness. Really, there’s nothing in the Arkansas forests that compares with its urgency and virility. Its the definitive sound of spring.
Combining these spectacular physical attributes with turkey lore makes the path to obsession easier to see. Turkeys are smart, but not in the way we humans think of smart. Turkeys are smart in a Zen-like way. There are no yesterdays or tomorrows in turkey time. There is only the now. This is not to say they don’t have a good memory because they do. They know every inch of their home, are quick to spot anything that looks out of place and they are suspicious of everything. This suspicion is a product of their place on the food chain. Humans aren’t the only critters that enjoy a meal of turkey. Total awareness is a necessity in their world. This form of thought, so alien to most of us, is what makes the turkey such an intriguing pursuit. Trying to get into the hickory nut sized mind of a turkey is THE challenge of turkey hunting. But figuring out what a turkey is going to do before he knows what he’s going to do is mostly an exercise in futility. Sure, there are some behaviors considered normal for turkey behavior that you can try to bank on, but turkeys aren’t bound by what they are supposed to do. And that’s what makes them so maddening. You make your calls, and you make your moves, and then you hope for the best. There are no guarantees.
Actually, there are some guarantees.
As the gray gives way to dawn’s pastel light show, and the whip-poor-wills give their encore songs, I guarantee you’ll give thanks for that alarm clock you cursed a couple hours before. And as that first barbaric gobble of spring echoes through the trees I guarantee the path to obsession will open right before your eyes.
No, it doesn’t make logical sense, but logic never answers all our questions. Maybe it’s best if I quit trying to figure this thing out and take a page from the turkeys for a few weeks each spring. Maybe it’s best if I quit asking why and just embrace the obsession.