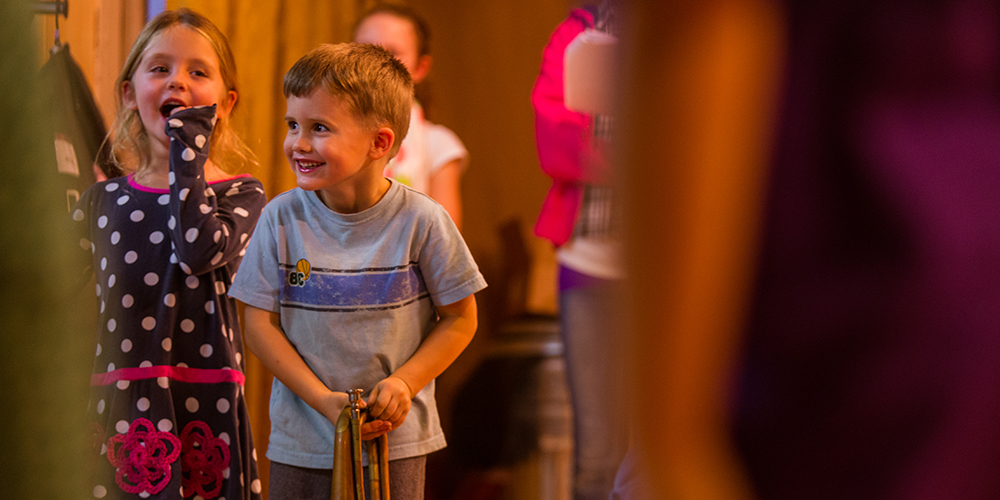 Shirley Faulkner spends her days sharing a love of music with anyone who walks through the doors at the Arkansas Center
for Music Education. Her love of music is a family affair. Her husband, Brian Faulkner, not only teaches the pre-K music program at the center, he also teaches music at area day care centers and schools. Incorporated in 2007, the center provides a venue for those who share an enthusiasm to sing in a choir, learn an instrument or brush up on an instrument they are already familiar with. “There are not many places for someone who enjoys music to go after they leave high school unless they take courses in college, and those courses only last a short period of time,” said Shirley. “The center provides a much needed resource to our community for people of all ages.”
ACME offers a wide variety of classes: pre-K music for ages two through four, a band program for ages 10 through adult, a string orchestra program, three levels of music class for home schooled children, the River Valley Treble Chorus youth choir, and the Community Festival Coral adult choir. Tuition is very reasonable, and a tuition assistance program is also available. “We believe these classes should be open to everyone, not just those that can afford to pay a tuition,” said Shirley. “We incorporated as a 501(c)(3) nonprofit organization, and the class tuition collected goes into the center to improve classes, purchase materials needed for backdrops and costumes for our productions, purchase instruments, and pay for our utilities.” The center also has a contract with the Russellville School District, in which they share their love of music by teaching music classes in the self-contained classrooms for students with special needs.
As with many nonprofit organizations, there is always a need for volunteers, donations and sponsors. Volunteers are always a priority, as the center depends on them to help make costumes and back drops for their stage productions. Volunteers also assist in fundraising activities like the 5K and 10K runs held  every June to raise money for the center. Shirley is, herself, a volunteer. She works long weeks as executive director, but does not draw a salary.  When they began this journey, she and Brian agreed that he would provide for their household while she worked on building up the Arkansas Center for Music Education into something the whole community could enjoy. Since they rely solely on donations and small tuition fees, the funds for her to draw a salary just aren’t available. She says it would be nice to be paid a bit, but knowing she helps people explore their love of music is enough.
Shirley thinks music does so much more for us than provide enjoyment. She believes it can build our self-esteem because she has seen it in her students.  She spoke about one particular student, a young girl with Down’s syndrome. “When this young lady began taking one of our classes she was very shy and quiet,” said Shirley. “We began to see a change quite quickly.  She began to open up and take part in class. She made friends with the other children, and you could just tell she enjoyed being here. Her mother even commented to me that she had never seen her open up and participate the way she did when she was in music class.” Shirley also mentioned  another shy student, a boy that would not make eye contact with other people. But after taking one of their music classes for a semester, and when time for production week rolled around, Shirley’s encouragement paid off. “We worked with him a lot in the days leading up to the stage performance,” said Shirley. “We talked to him about looking forward, not at the ground. I told him I would be right there in the audience and he could just look at me.”  During the performance the young man not only participated, he even looked up at the audience several times. “His mother was elated,” said Shirley. “She couldn’t believe he performed in front of an audience and actually looked up at them.”
The center currently has approximately 200 students enrolled in programs this semester ranging from infants to their oldest student who is 83-years-young and performs with their community band. Shirley believes programs like these should be available to anyone, regardless of age, who shows an interest.
The Arkansas Center for Music Education would like to extend an invitation to the community to attend their Christmas concert at the Hughes Center located on E. Parkway in Russellville on December 12 and 13.
For more information on volunteering, sponsoring, or participating in a class next semester, you may contact Mrs. Shirley Faulkner at info@ac-me.org or visit their location on Tyler Rd in Russellville.