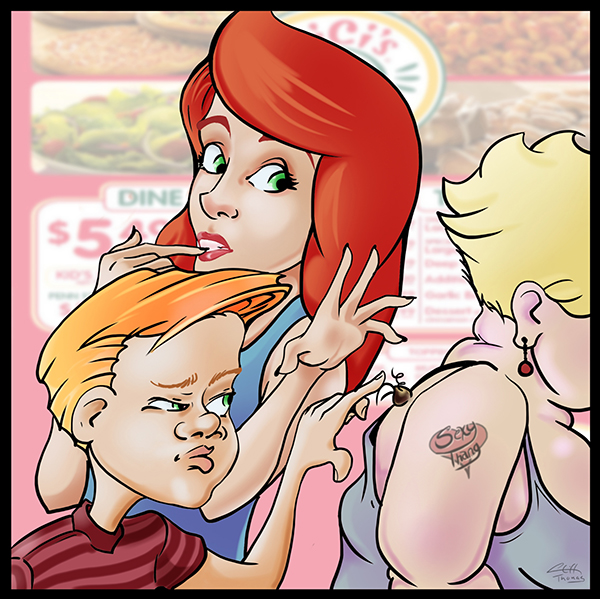 Every once in a while, out of desperation when things don’t work out babysitter-wise, I am forced to bring my child to work with me. He usually acts up, gets into something or embarrasses me in front of a client.
One day, the universe lined up to spite me mightily and a teacher work day was scheduled right before Easter. Consequently, one of my employees was forced to bring her son to work with her as well.  And as is the case with all other major holidays, the salon is bustling with customers needing their hair and nails primed and polished for all other holiday revelers to see.
The boys were well behaved at first. But as with all children, the good behavior reserve was soon depleted. I finished my work day well before my employee and offered to take both boys to lunch. After everyone was safely buckled into my car, I asked where they would like to eat. The boys immediately suggested CiCi’s Pizza. I thought it would be perfect because I could bribe them to eat pizza before dessert with the promise of letting them play in the arcade area for good behavior.
I gave the boys a brief pep talk about good manners and even better behavior before we embarked on our pizza adventure. We made it through the car ride and the walk across the parking lot without incident, which was a small victory for me in the time I’ve spent being Raff’s mom. There was a long line in the restaurant that day, but we queued up and waited our turn before the cash register.
The couple in front of us were talking very… colorfully (read: inappropriate). Since nothing gets past my son, I gave him the “mom look” that all kids know. The one that simply says: “I’m watching you so don’t say/do/think about anything you shouldn’t.” I hoped the couple just hadn’t realized  there were two young children behind them hearing every word they were saying. I tried to make eye contact with the woman, hoping to catch her attention so I could send her a visual message or just give her the stink eye.
After watching the woman for a while, I noticed a very interesting mole lurking on her back. She was a short, plump woman, wearing a camisole that was very low in the back (and the front) and I just couldn’t help but notice this most spectacular nevus. I would definitely have sought the opinion of a dermatologist if it had been my mole.
The mole looked like a large milk chocolate baking chip, but one that was slightly melted and drooping to the side. You know the kind. It was a nice shade of brown on the base and middle, then had a considerably darker shade of brown speckle right at the very tip-top. And as we all know, any mole with two different colors in it is suspicious and should surely be looked at by a doctor. But what really caught my attention was the cluster of about three hairs shooting out of that mysterious dark brown tip. One hair was new to the clique and rather short, one was very curly and looked quite coarse, and the third was probably the original strand to conquer the mound. It was long and stood straight out, just begging to be plucked from that ominous speckle. I couldn’t take my eyes off of it!
Unfortunately, people watching is an activity that my son also indulges in. In a split second, I realized that Raff had also spotted the mole. The next scene played out in slow motion. To my horror, I see his little arm go up and out towards the woman’s back, and before I can even react Raff gets a hold of that suspicious brown lump and tries to pull it off of her skin.
The woman lets out a loud yelp and whirls around to stare accusingly at me. I have absolutely no idea what the look on my face said. But before I can even offer up any sort of explanation, Raff says: “Oh I’m sorry, I was just trying to get that nasty thing off your back.”
The woman looked absolutely horrified and attempted (but failed) to pull up her shirt in the front and back to try and cover the drooping baking chip. She turned around to face the register to continue waiting her turn, and was silent the rest of our wait. As with all other times Raff has said something incredibly embarrassing, I use my go-to defense of not making eye contact. Because if you don’t acknowledge it happened, it didn’t happen.
I made sure that we didn’t sit anywhere near the couple, and the boys behaved well and enjoyed their pizza. After the boys ventured off into the arcade, I went in search of dessert. But I kept my distance from any of the sweets with chocolate chips on top.