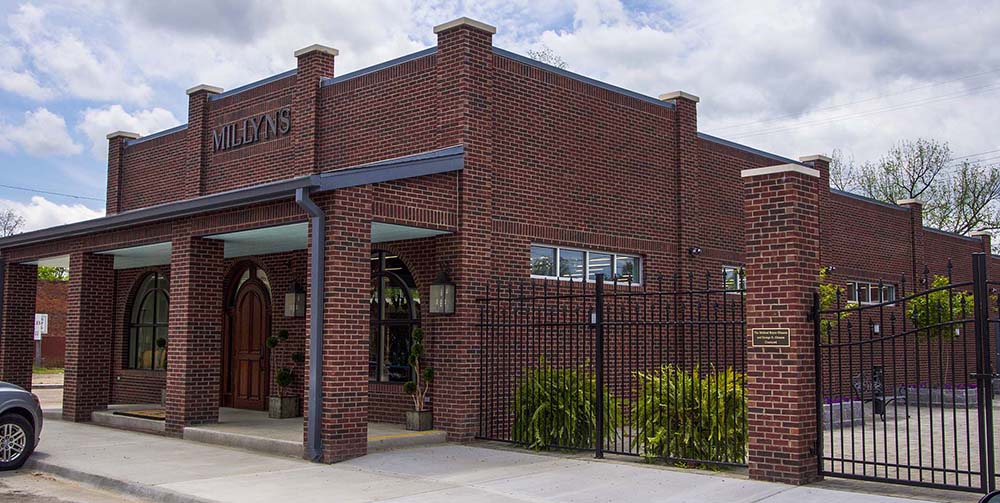 Front Street Dardanelle hasn’t changed much since 1969. The businesses come and go but the character of an old Southern river downtown district is still intact. The brick and mortar structures lining Front Street shrug off the years. And at least one of those businesses from 1969 has aged nicely as well. The business, in fact, outlived its structure.
Millyn’s Inc., a boutique, home accessory and gift store on Front Street, first opened its doors in 1969. It was the creation of mother/daughter team Mildred Gleason (“Mil”) and Lynne Murphy (“lyn”). Mildred was an English teacher at Ola High School and Lynne was in her fourth year of teaching at Russellville High School when they decided to go back into retail. The Dardanelle Mercantile Company, which also operated on Front Street from 1882 until 1962, was their family business for four generations. Decades of happy and stylish customers confirmed that Mildred and Lynne had made a good decision.
But August 15, 2015 brought dramatic change. Millyn’s original building was ablaze with a fire that started in a neighboring business. By 9:30 p.m. an entire block of historic downtown Dardanelle buildings had been destroyed.
After the fire, the ladies of Millyn’s had some immediate concerns. First they had to get the merchandise packed and out. Safety concerns about the building meant that sorting what was salvageable would have to wait.
Second, they had to take care of Millyn’s registered brides. “The fire was on Saturday and two of our brides had big parties the next Friday,” said Lynn Murphy. “Their parties are once-in-a-lifetime events for brides. Millyn’s will not mess them up.” Millyn’s phone number was forwarded to Lynne’s cell phone and all brides were called and assured that their gifts were safe.  Millyn’s continued to take phone orders. Millyn’s delivered on time. Millyn’s would be set up for brides in a rental location by noon Monday.
Third was to call Kathy Keeman Price and find a rental space.  The ladies had lots of help. People called. People fed the ladies. People came and asked what they could pack or carry.  “My sisters, Marcy Lawrence and Dr. Diane Gleason, just killed themselves for me,” said Lynne. “My daughter, Dr. Missy Clifton, came a full night and day. I finally convinced her she could be the most help to me by going home and taking care of her three children and her practice. And Millyn’s store manager, Teresa Miner, gave her usual 110 percent, working right up to the minute of serious scheduled surgery and coming back from the surgery much too soon.”
Plans for a new Millyn’s home were in the works as the smoke cleared. By 8:30 on the morning after the fire, Lynne Murphy  and her sisters — Dardanelle High School Principal Marcy Lawrence  and Arkansas Tech University professor Dr. Diane Gleason — had made a decision: The standing but catastrophically damaged Millyn’s building would have to be destroyed. But they also decided to rebuild on the same lot. Later that morning, Lynne made a verbal agreement with Kirby Specialties to construct a new building and to do it quickly.
In the meantime, Millyn’s operated out of rental space in Russellville until the new store building was completed at the end of March 2016. “We want to thank Russellville for giving us a place to open and for welcoming us so warmly and supporting us so generously,” said Lynne. “Russellville has always been kind to us. Even in Dardanelle, a big lot of Millyn’s business has always been Russellville. We greatly appreciate Russellville. But we have to go home.”
Home for Millyn’s goes beyond 1969. Home means a family retail presence on Front Street in Dardanelle since 1869. “My great, great grandfather, John Jackson Boyce, walked from Villanow, Georgia, to Dardanelle and put Brothers on Front Street in1880. My grandfather [Jack] Boyce owned and operated numerous businesses on Front Street. He was burned out twice by fires from other businesses and came back quick and strong both times. He eventually put in the Dardanelle Mercantile Company. My parents, George and Mildred Gleason, bought into that business in 1937 when they graduated from the University of Arkansas and Hendrix College. My sisters and I grew up in that big rambling general store where we sold everything from feed and seed to housewares, clothing, shoes, and groceries. My mom and I left public school teaching in Ola and Russellville and put in Millyn’s 47 years ago. So, you see, we will finish what we started,” said Lynne. “No fire is going to stop us.”
Millyn’s opened their new building on April 2, 2016.
“We want to invite everyone to come see us in Millyn’s real home on Front Street in Dardanelle,” said Lynne.
Arkansas Tech graduate and Russellville native, Teresa Minor, joined Millyn’s in 1995 and is now overall store manager. Lynn’s sisters, Marcy and Diane, help out during the Christmas Holidays because, after all, retail on Front Street in Dardanelle is part of their heritage. 