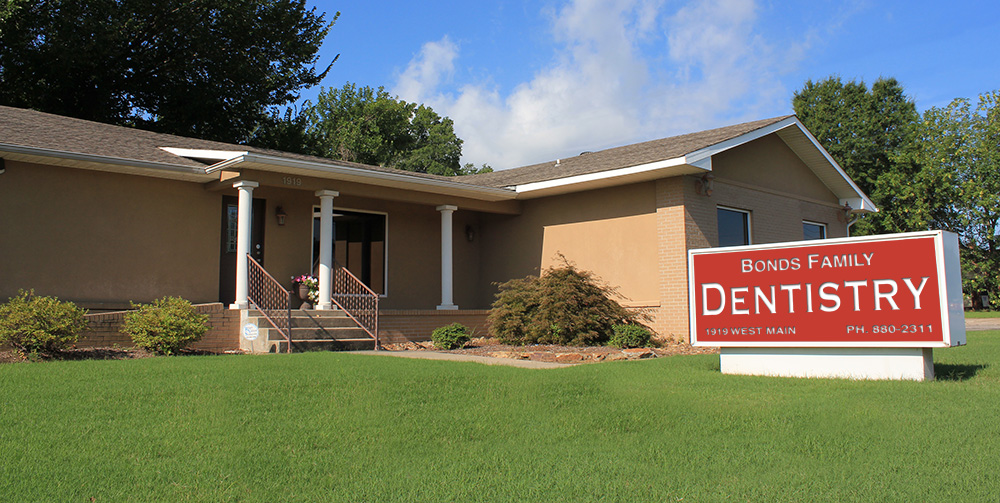 Despite the fact Dustin Bonds came from a long line of educators, he always knew he wanted to be a dentist. It was just natural that he began working toward the goal of owning and operating his own practice with education. And even though he and his wife, Angela, strayed to Tennessee to further his education post bachelor’s degree, they always knew they were going to return to Russellville.
“Russellville felt more like home than anywhere else,” Dustin said.
It could feel like home because Dustin was born in a St. Mary’s hospital room, just down the street from his current office location. Or it could be the fact Dustin and Angela met at Arkansas Tech University. Whatever reason one chooses from the few Dustin and Angela provide, there is no doubting their success: Bonds Dentistry just celebrated 10 years at its West Main location and is going on 16 years of servicing Russellville and the surrounding communities. Its long-time presence isn’t the only reason locals recognize the business name, though.
Dustin’s real name is James. If rumors have circulated, let it be known Dustin has no relation to the Bond character idolized in the major motion pictures since the 60s. “It was one of my favorite movie series as a kid,” Dustin said. “I feel like James Bond is still relevant.”
So relevant that Dustin is rumored to be seen walking the halls of his office dressed as the slick, fictional character. The name itself, though, is enough of a fun fact to make anyone feel comfortable. “It’s a great ice breaker,” Dustin said.
An ice breaker that almost seems unnecessary. The office is equipped with televisions and nitrous oxide in every operatory for patients who are more nervous than most. Anxiety is expected in dentistry, Dustin said. The younger patients love taking advantage of the televisions. “You turn on Disney and kids don’t care if you have gas or not,” he said. “They’re angels.”
Disney isn’t the only factor for why children love Bonds Dentistry. The six people that staff Bonds all have small children, equipping them with generalized experience and the means to take care of their patients no matter their age. And aside from comforting children, Bonds and his staff outsource dentures but make molds and the like in their onsite lab. Their office is outfitted with a sterilization lab and records are now entirely electronic, a perk Dustin says makes looking at a tooth much more closely possible.
And Dustin knows that he’s not going the extra mile just for his patients; he’s taking care of his friends. “I feel like I know my patients one on one,” Dustin said. “We know each other and we know each other’s families. I feel like that’s one thing that separates us. We’re a part of the community. We treat our friends, not just our patients.”
That kind of care is something Dustin wants to be known for. “We’re an office that provides top level dental care but with that same small town feel.”
Any friends of Bonds’ are welcome at any time. The office is always accepting new patients and works with several different insurances and ages.
Those looking to schedule services with Bonds Dentistry are encouraged to contact their office at 479-880-2311.