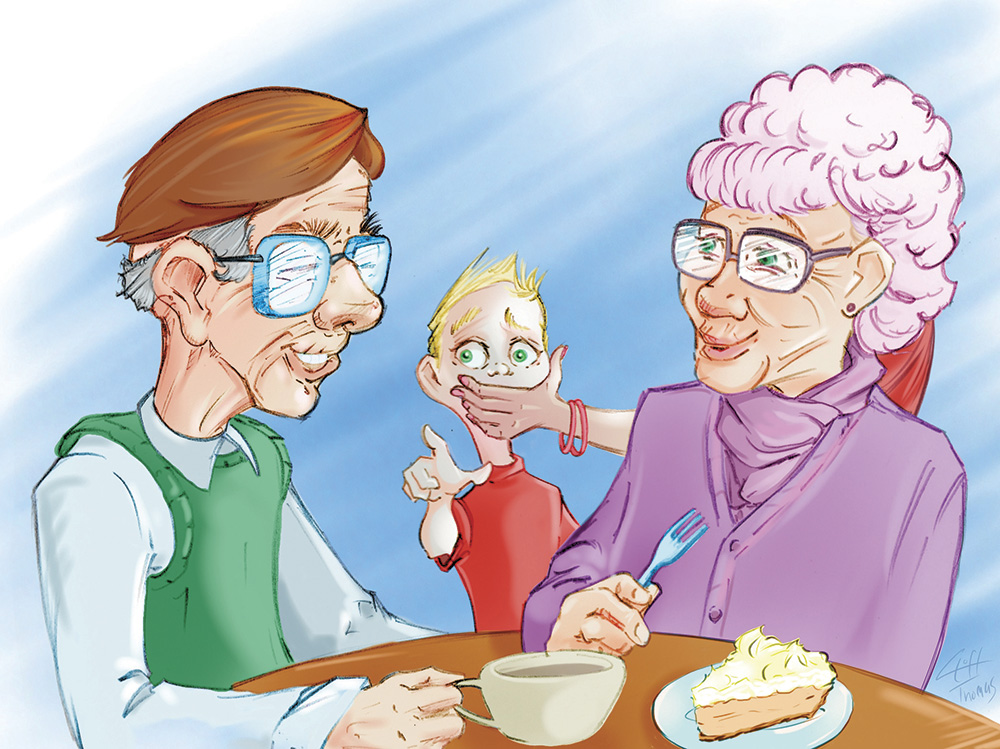 Birthdays are not always as fun as they were when we were young, just another year older, another year gone by. In my family, adult birthdays are usually celebrated with dining out at a restaurant chosen by the birthday girl or boy… I mean woman or man. It’s relatively low key but still fun to get everyone together to celebrate.
My sister is the only September birth in the family, so when her birthday came around last year she chose Ruby Tuesday as her restaurant of choice, and we all agreed to meet for an evening of quiet celebration.When my son and I arrived, we located members of the family and joined them at a big round table. We all embraced in a jovial greeting and wished my sister a happy birthday.
I quickly noticed an older man seated directly in front of my line of vision wearing a horrendous toupee. It was extremely obvious that it was a false hairpiece. The gentleman had a few tufts of his own hair remaining above his ears and growing in a line along his nape. His own hair was very gray, and the hairpiece was a shade of medium brown. There was a small sliver of the man’s balding head showing between the toupee and his own hair. The hairpiece was perched precariously on the gentleman’s head, slightly askew, and slightly disheveled in the back. He was dining with an elderly woman, perhaps his wife or companion, and I couldn’t help but wonder why she didn’t advise the man against wearing his hairpiece.
I was really hoping my son wouldn’t catch sight of the toupee but after spotting it myself, I was afraid he might have followed my line of vision.
“What’s on that man’s head?” Raff asked, loudly.
“Shhhh!” I hissed. “Raff, look over your menu so you’ll be ready to order when the waitress comes.”
Our waitress came right then and took our drink orders, providing a distraction. However, as soon as she walked away, Raff turned back to the question at hand.
“Mom, what’s on his head?” He asked directly. I was unsure how to answer, but thought it might be best to offer up a simple explanation instead of dodging his question all together.
“Well, it’s called a toupee, and —”
“What’s a two pay?” Raff interrupted.
“Shhhh!” I hissed again. “Raff I’m not going to answer your question until you lower your voice. Can you do that?”
Raff solemnly nodded his head.
“OK, well a toupee is similar to a wig. Except it is worn by men who are going bald. But the men who wear toupees are embarrassed that they are balding so they want to cover it up. And it’s never nice to say something to someone that would make them feel embarrassed right?”
Raff shook his head no.
“That’s right. So we never want to call attention to the fact that someone is wearing a toupee, OK?” I explained.
“Right!” Raff said. “We only want to say nice things to people and give them compliments.”
“Yes! That’s correct.” I said. That conversation went well, I thought to myself.
The waitress returned with our drink order and took our dinner order. Several moments later, the food arrived and we all began to enjoy our meal.
Only a few bites in, I noticed the toupee man and his companion were standing up to leave. He pushed his chair back in, took the woman’s hand and turned in our direction. I nervously glanced at Raff to find him thoroughly engrossed in his macaroni and cheese. I breathed a sigh of relief.
The man and woman walked around our table and toward the door when Raff’s head popped up and he started waving vigorously at the couple.
“Bye! I like your toupee! It looks great on you!” He said in a very loud voice. I immediately looked at my plate, pretending I heard nothing.
The man turned to Raff with a startled face and looked slightly embarrassed. He quickly regained his composure and smiled at Raff.
“Thank you. I like your hair too.”
Raff beamed back up at the gentleman, and stuck out his hand. The man shook Raff’s hand politely. The man gave Raff another smile and turned to walk away when the older woman leaned down to whisper in Raff’s ear. I had no idea what she was saying. She ruffled Raff’s hair, gave me a sweet smile and walked in the direction of the older man.
“What did she say to you?” I asked Raff.
“She said thanks for complimenting his toupee. She said she doesn’t like it very much, but it makes him feel younger so she just lets him wear it. I don’t like it very much either. I will NOT wear one of those when I get bald.”
I just smiled to myself and made a mental note to talk to Raff about when compliments were OK and when we should say nothing at all.