Basic biology for the beginning chef 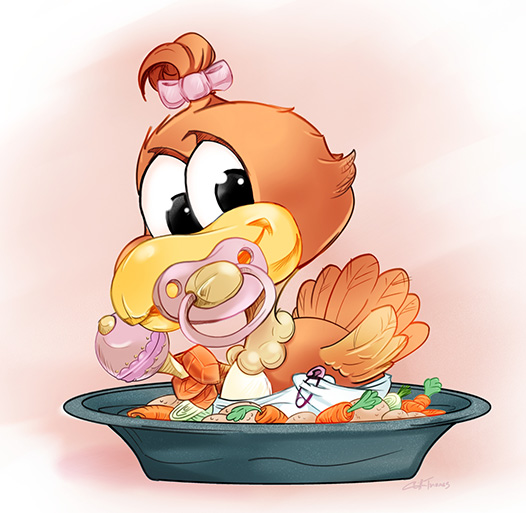 While Thanksgiving is a time to be gracious and thankful, it’s also a time to fellowship with friends and family. And for most American families that happens around the dinner table on the fourth Thursday of every November.
Thanksgiving recipes are often passed down through generations of women, with so many spices and ingredients being “secret.” Eventually, there comes a time when the proverbial turkey torch is passed down to another member in the family, when the previous cook no longer wants the responsibility. One year, I decided to host my own thanksgiving dinner with my friends the Wednesday before the official “Turkey Day.” I have a lot of friends who don’t have family living nearby or don’t have anywhere to go for the holiday feast, so I decided to invite them to my home.
I consulted with my mother on how-tos and how-nots, and while she was able to give me a lot of good instructions, much of it was verbal advice that I promptly forgot. The morning of my impending feast, I was dashing around trying to find a recipe to cook the defrosted bird resting in the bottom of my refrigerator.
I Googled Thanksgiving turkey recipes.
“Julia Child… yes I’ll use this recipe!” I said to myself. I read down the list of steps. “Whoa… way too complicated.” I moved on down the list.
“Paula Dean… oh my, that calls for a lot of butter…”
“Rachael Ray… that’s a lot of EVOO…”
I kept scrolling until I ran upon an article called “How To Cook Your First Turkey.” It was simple yet detailed. Perfect.
I preheated my oven, measured my broth and seasonings, and dressed the turkey. I was so proud of myself as I pushed the heavy pan into the oven.
An hour later I came back to check on my bird. My kitchen already smelled of sage and thyme and all sorts of savory goodness. I opened the oven door and pulled out the pan slightly. Everything was looking good! I started to slide the rack back into place when I noticed something peculiar. There was now a thing, a thing which had not been there before, poking out of the hole in the bottom of turkey. I stared at it for a moment, then blushed, realizing it must be the turkey’s, um… private part.
“Gosh… you’d think they would remove that when they took the feathers and everything else off.” I mused. I closed the oven door and returned to my other tasks at hand.
When another hour had passed, I checked on the turkey again. As soon as I pulled on the oven rack and some of the broth sloshed around, that peculiar “thing” slid out of the hole a little further. I gasped!
“There is no way a turkey can have… ” I jumped as my cell phone started vibrating and sounding off in my apron pocket. It was my mom.
“Hi, mom.” I answered.
“Hi, honey, how’s the turkey coming along?” She asked.
“Well, good… but… well there’s this thing starting to come out of the bottom of the turkey.” My voice lowered as I finished my sentence.
“What?” She asked. “I couldn’t catch what you said. There’s a thing in your turkey?”
“Yes!” I hissed. I could feel the heat creeping into my face. All of the sudden a thought entered my brain (as common sense left it) and my eyes grew wide with my realization.
“Oh my gosh… I think there’s a baby turkey in my turkey!” I said loudly.
“What?!” Exclaimed my mom. “What are you talking about, Sarah? Turkeys lay eggs, honey. Did you remove the neck bone and the bag of giblets from the turkey before you put in in the oven?” She asked.
I felt embarrassment rush over me. Of course turkey’s lay eggs. Of course the skinny rod that was poking out of the bottom of the turkey is the neck I had neglected to remove. I breathed a sigh of relief. I finished my conversation with my mom, and returned to preparing my other dishes while the turkey cooked.
A few hours later, my house smelled delightful and my perfectly browned turkey sat on a carving board on the kitchen island, waiting to be sliced into deliciousness. I had removed the neck and bag of giblets and made a scrumptious gravy from them, as instructed by my mother.
I stood at the edge of my kitchen and admired the savory spread before me. I had been cooking for hours and prepared several dishes and desserts in addition to my handsome turkey. I was so proud of myself (minus the fleeting moment where I thought there was a baby turkey in my turkey) and was filled with so much gratitude.
The doorbell chimed, and I turned to the front door to welcome the first of my guests with a smug smile. I had successfully cooked my first Thanksgiving dinner!
Which of course meant, that I was now officially a grown up!