No smoke, no fire, no flush handle 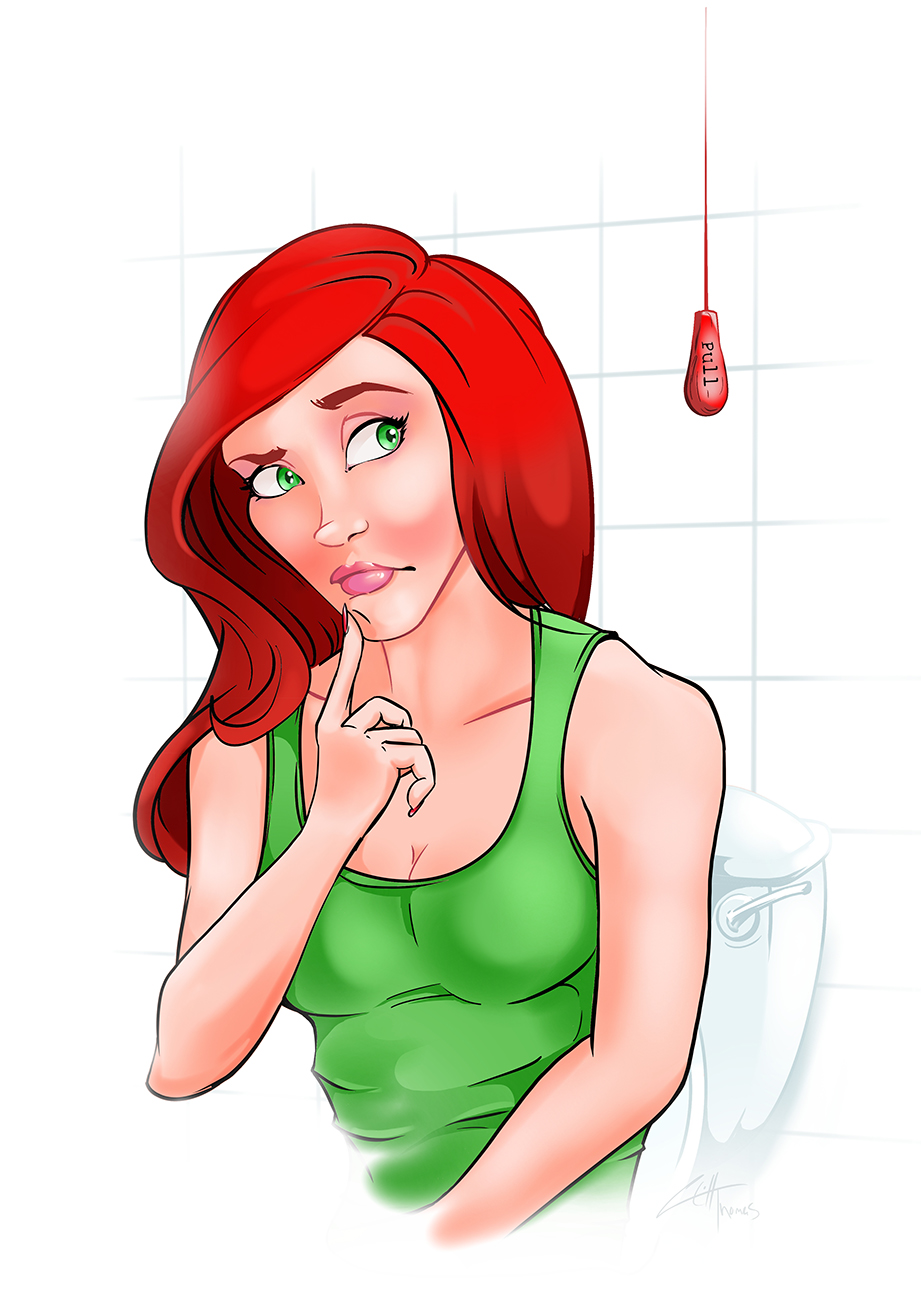 On a recent trip to Europe I visited London. It was the first time I had visited Great Britain, and I was quite excited to experience its rich culture.
My first day was spent tackling the subway and recovering from jet lag, but the second day I was feeling much more energized and ready to explore the city. I set off early and took the subway into the heart of London. Then I just started walking. This is my favorite way to explore a city, taking it all in, stopping at local places to eat and drink. I browsed at several outdoor markets, relishing the vast array of goods, brightly colored fruits and vegetables on display, and the scent of aromatic spices.
I slowly made my way to The Tower of London, took a few pictures, meandering toward the next stop on my list visiting several pubs along the way. Soon I was looking for a restroom. I began to glance around and saw a fast food chain I was familiar with and popped in. At first glance I didn’t see the sign marking the bathroom so I asked the girl behind the counter.
“Excuse me, can you tell me where the restroom is?” I asked sweetly.
“We don’t have a toilet for public use. The public toilets of London are at the end of this block.”
“Oh… OK thank you,” I said, taking heed of her emphasis on the word “toilet” instead of restroom.
I headed down the block toward the public bathrooms, down a long and wide hallway, and then came across what I would call a bathroom attendant. The broad woman was standing in the way of the bathroom door. What kind of sick joke was this??
“Fifty pence please,” the woman said gruffly.
“Listen here…” I started to give the bathroom bully what for about extortion and bribery, especially in the “toilet” when she motioned to the kiosk beside her. I read the typed lettering on the machine and eyed the coin slot.
“You have to pay to use the public bathrooms?” I said incredulously.
“Just the toilets ma’am,” the attendant said. I mentally rolled my eyes.
I got out my wallet and started looking through all of the foreign money I’d received from the conversion desk at the airport. No coins. And I was pretty sure that pence meant coins.
“Does this thing give change?” I asked the woman.
“No, it’s coins only.” She replied.
Great. Never in my life had I encountered such a thing. I heaved a sigh of frustration, turned and walked back out of the long hallway.
Across the street I spied a nice looking restaurant. That seemed like the best idea.
I walked into The Slug and Lettuce and was promptly seated, placed a drink order with the waitress and asked where the bathrooms were located.
“Well, the toilets are down the hallway to the left,” she said.
“Thanks,” I said as I stifled the urge to roll my eyes in exasperation and walked briskly to the bathroom. Sweet relief! Finally!
And then I realized I couldn’t find the flusher. Not on the commode, not on the wall, and not an automatic sensor one. I looked all over that porcelain fixture and found no flusher, but I did see a thin red cord dangling in the corner.
“Oh that must be it,” I thought to myself and gave it a hard yank.
“WOOWEE WOOWEE WOOWEE” an alarm sounded off and the lights in the bathroom began to flash.
I panicked! I finished bucking my pants and had to forgo washing my hands as I ran out of the bathroom as quickly as I could.
As I made my way back to the table, trying to be nonchalant as possible, several staff members ran to the bathroom. My face immediately went red. I began to wonder if I could just walk out since I hadn’t even received my drink yet. Deciding not to chance it, I tried to melt into the back of my chair.
A few seconds later my waitress arrived with my drink.
“Sorry it took so long. There was quite a commotion in the toilet,” she said.
“Oh?” I asked, while looking away guiltily.
“Yes, the fire alarm sounded but when the manager went in to check there was no fire. Probably just someone smoking in there is what set it off. Happens all the time,” she said.
“Is it common to have a fire alarm in the bathroom?” I asked.
“In the toilet you mean? And yes! If you were on the toilet doing your business and you smelled a fire, would you want to run out with pants down around your ankles looking for a fire alarm to pull? Of course not, so you would want an alarm in the toilet with you.” She gave me a look like I had just asked the silliest question.
A few minutes later I paid for my drink and got back on my way. I wandered down a street packed with a menagerie of eclectic shops and caught a man by surprise as he was urinating on the side of one of the buildings.
“Oh I’m sorry! I didn’t see you there,” he gushed. “I didn’t have any change so I couldn’t use the public bathroom,” he said sheepishly.
“It’s OK, neither did I. But at least you didn’t pull the fire alarm while you were doing it.”