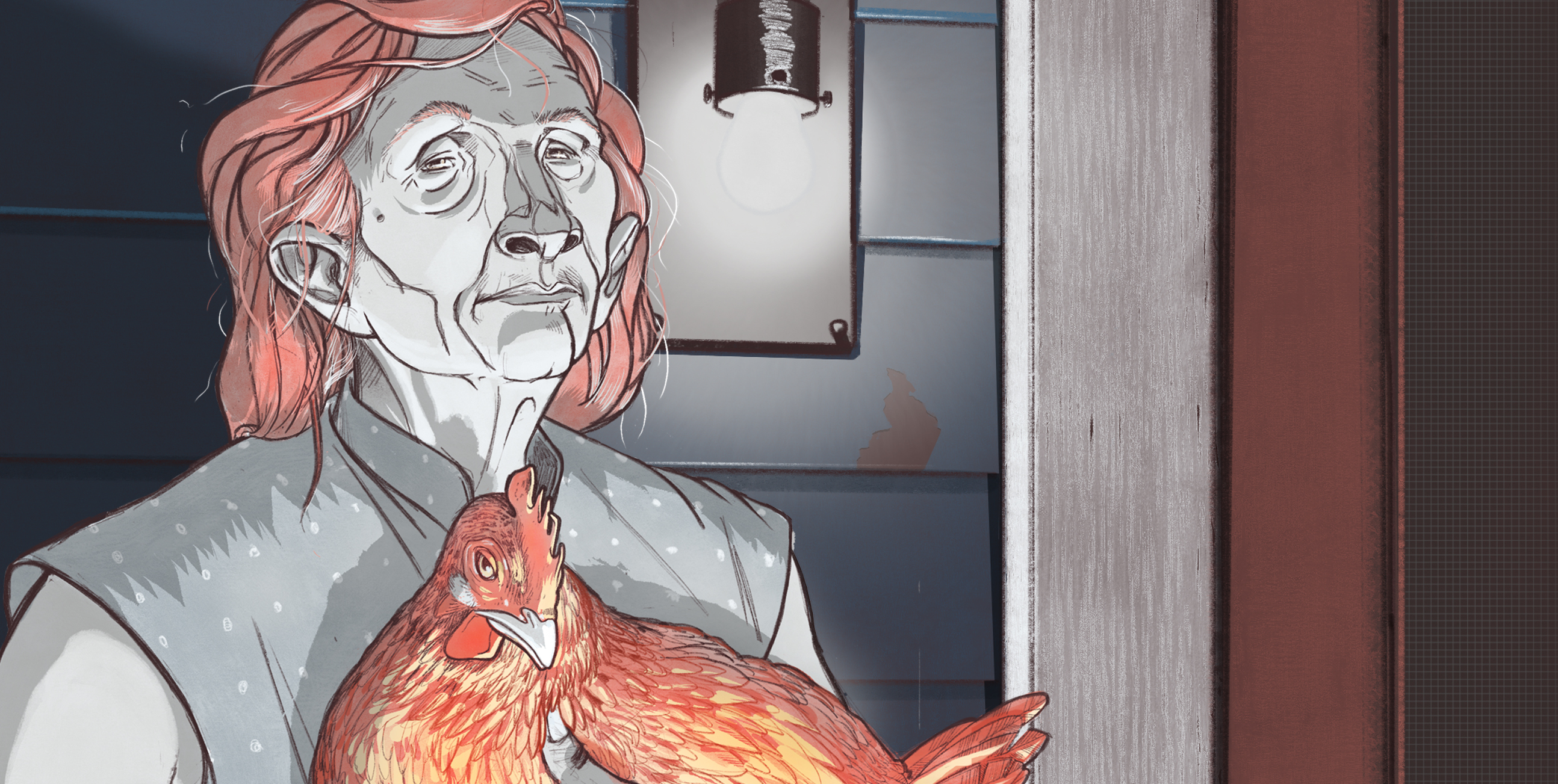 Bodega Road goes nowhere, dead-ending at the bottom of a hollow about six miles from where it begins. It’s one of those red clay dirt roads, the kind that sticks to the bottom of your shoes for weeks and sucks 4-wheel drive trucks down to the axles when they veer off of the packed bed. Last night’s thunderstorms had left it the consistency of pancake batter.

Though the road was visible on maps and GPS, it was impossible to find with your own eyes. You had to know where to look, and even then you could miss it. Today, I missed it twice. As a detective with the Yell County Sheriff’s office, I was driving down Bodega Road — in 4-low, slow, and white knuckled — looking for answers. As the newest member of the office, I had no choice in the matter.

Reports of small livestock — rabbits, goat kids, suckling pigs, and even a calf — disappearing in the area had finally reached the point where something had to be done about it. At least someone needed to look into it. My destination was the one residence on Bodega.

It was a smallish wood-sided shanty squatting on the only clearing along the entire road. Waist-high broomsedge and blooming golden rod lined a rough pasture bordered by rusty chicken wire and anchored with graying cedar posts. The cool autumn weather had summoned green patches of chickweed amid the dying Bermuda grass. I pulled alongside the only car in the home’s narrow dirt driveway, a 1977 Thunderbird in that ghastly stock cream color. One hideaway headlight cover was on the fritz so that it was locked in a perpetual wink. A red feather danced across the yard in an afternoon breeze as I closed the truck door and started down a gently rutted pathway to the front porch.I knew the homeowner’s name was Becky Orpington. My research said that Orpington was a widower of three decades and nearing 90 years of age.

A perky shock of stiff red hair bounced as Orpington waddled with an odd smoothness to the screen door. She side-eyed me with narrowed pupils, her irises the color of butterscotch.

“How do,” she said in a peculiar halting fashion. Her voice was throaty and hoarse. I introduced myself, showed her the badge, and asked if we could visit for a while. “I reckon,” she replied dryly. “The parlor is this way.”

The house was mostly well kept and modestly furnished. Birds were a theme. There were reproductions of James Audubon’s naturalist paintings of North American birds covering nearly every available space. Tacky ceramics of chickens and turkeys sat on end tables. A colorful feather arrangement headlined by the magnificent brilliance of peacock tail plumes spilled out of large glass vase on the kitchen table. A wall of blue ribbons stood behind the vase with 30 ribbons total. “First Place: Yell County Fair,” they read.

“What can I do for youins?” asked Orpington, her tone lilting from the croak.

I knew Orpington raised a few animals, or had done so in the past, so I asked if she had lost any livestock as of late. I asked if she’d noticed anything around her place that would make her suspicious. Orpington said she hadn’t, that, yes, she did keep a few animals, though, mostly chickens, but all were accounted for. As I scribbled on the notepad, soft rhythmic clicks pulled my attention toward the kitchen as a chicken stepped into the parlor doorway.

It was a standard looking red hen, likely a Rhode Island red as I recalled the yardbirds my grandmother had kept so many decades ago. The hen stood still as stone staring at me in that chicken way, head turned to the side, saurian eye locked onto mine.

I turned my focus back to Orpington, who was also staring at me intently.

“So… you don’t recall any strange goings-on around these parts here lately?” Orpington said that things were “just peachy back hyar in the holler.” She hadn’t lost a chicken to human or varmint for a long while, and even her garden okra had produced a bumper crop this past summer. “Ain’t saw a deer or raccoon back hyar in, oh, I’d say five or six years,” said Orpington. “Jus’n the crows and birds, and ma chickens.”

Orpington turned toward the hen who then sauntered to Orpington’s feet and hopped up onto her lap. They both focused their unblinking gaze on me. We sat in silence for some time, I’m not sure how long, when a cacophony of cackles erupted from the backyard, jarring me from the stupor. “More of your chickens?” I asked.

“Oh, I gots tweny er so layin’ hens,” replied Orpington. “I call ‘em ma blue ribbon gals. Them hens are the ones ‘sponsible for them wards I seen you eyeballin’,” she said. “They’re likely feeling a bit peckish. Haven’t fed em since early this mornin’. You can come watch if’n you want; it’s quite the spectacle.”

I followed Orpington down into her basement expecting to see sacks of feed, but instead she walked up to a huge glass tank writhing with the furry little bodies of more than 30 rats. “This is my secret ingredient for them blue ribbons,” said Orpington. “Lotsa protein. But we been runnin’ low lately. This here’s the last of em, and I been tryin’ to ration em out. Dang rats just ain’t multiplyin’ like they used to fer some reason.

You’ll see lots of weird stuff as a rural law officer, things that even with an explanation seem too bizarre to be real. But watching a 90-year-old woman climb a ladder and load rats in a five-gallon bucket with the fluid athleticism and ease of a 30-year old, and then dump that bucket into a chicken pen nears the top of the list. But it doesn’t beat what happened next.

I know a little about science and biology. I know that birds are descended from — actually, they are in fact — dinosaurs. I’ve also been around chickens my whole life. I’ve watched them eat June bugs, lizards, and frogs. But watching two dozen chickens descend on a bunch of foot-long rats like a pack of velociraptors was a new and disturbing experience. After the frenzy, which lasted maybe five minutes, a few chunks of pink rat flesh and some disturbed topsoil were the only indications of the wholesale carnage that had just occurred. The hens were quickly pecking though the leftovers as I stood mouth agape.

A slow smile stretched Orpington’s thin wrinkled lips. It was the first time any expression had crossed her pallid face since my arrival. “There’ll be some boomer eggs tomorry,” she said with a wink. “Nothin’ puts weight in an egg like fresh red varmint meat. Puts some weight on me, too.” Orpington’s clucking chuckle made me uneasy.

“They ain’t much different than squirrels,” said Orpington. “Not as tasty, and they sure don’t measure up to them big white rabbits.”

The awful truth came to me with clarity, but as every last scrap of rat disappeared into ravenous craws, I knew that the truth would be impossible to prove. Then, suddenly, the hens went silent. They gathered at the fence in a slow synchronized cadence. Every yellow eye was focused on me.

“Of course, the best eggs come from more pinkish meat, but my hens ain’t had the good stuff in thirty year or so,” said Orpington. “I been hankering to try it again, myself. If I could just work up a little more nerve.”