Eichmann in Jerusalem: A Report on the Banality of Evil 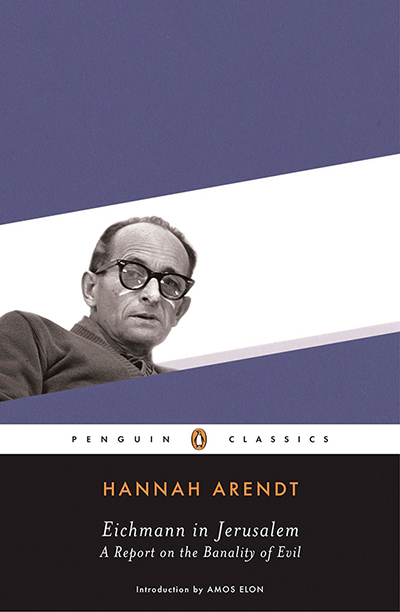 As reviewed by Johnny Carrol Sain
“It is indeed my opinion now that evil is never ‘radical,’ that it is only extreme, and that it possesses neither depth nor any demonic dimension. It can overgrow and lay waste the whole world precisely because it spreads like a fungus on the surface. It is ‘thought-defying,’ as I said, because thought tries to reach some depth, to go to the roots, and the moment it concerns itself with evil, it is frustrated because there is nothing. That is its ‘banality.’ Only the good has depth that can be radical.”
~ Hannah Arendt
Arendt’s book — Eichmann in Jerusalem: A Report on the Banality of Evil, is a densely packed but fascinating read about the life, heinous actions, and finally the trial of Adolph Eichmann, S.S. leader just a few rungs down from Heinrich Himmler. Eichmann oversaw the deportation of Jews and later facilitated their transportation to death camps as part of the Nazi’s “final solution.”
Arendt offers copious insight into the relative frailty of the Nazi movement (spoiler: it hinged on merely the thoughtlessness and apathy of other European nations and the German people in general) as well as a surprising look at the seemingly paradoxical connection between the Nazis and powerful Zionists of the day, which will make you scratch your head even more about the current Israeli attitude toward Palestinians. Or maybe it makes it more understandable. The book has that kind of confounding depth, often offering more questions than answers and asking the reader to deeply ponder on just what is the difference between “good” people and “bad” people.
Arendt’s assertation of the “banality of evil” has drawn fire ever since the book was published over 50 years ago, but her point is neatly summarized with this quote:
“The trouble with Eichmann was precisely that so many were like him, and that the many were neither perverted or sadistic, that they were, and still are, terribly and terrifyingly normal.”
And this one:
“That such remoteness from reality and such thoughtlessness can wreak more havoc than all the evil instincts taken together which, perhaps, are inherent in man — that was, in fact, the lesson one could learn in Jerusalem.”
When you read through this thorough look at one facet of the inner workings of the Nazi regime, it becomes crystal clear that the only thing that kept the machine running for as long as it did was so few people trying to stop it.
That’s a timeless lesson.