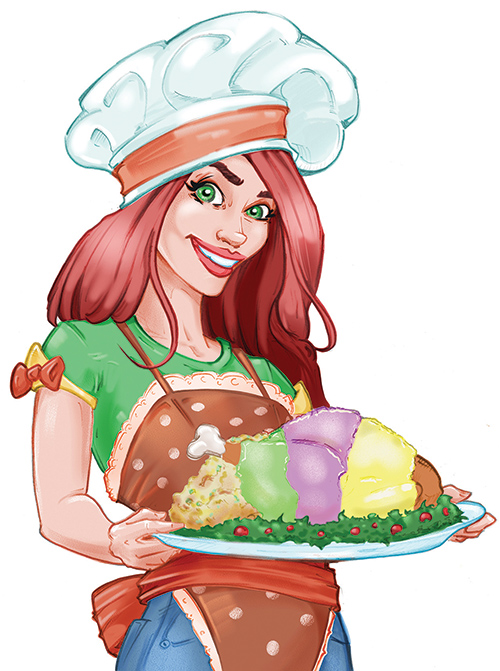 Thanksgiving is one of my favorite holidays. It’s a time for reflection on all that we are thankful for, and gathering with friends and family that are dear to us. And, of course, a chance to eat yummy food.
Every year, I host a large Friendsgiving. I love to cook, love to host friends at my home, and I love to feed others. It is quite the endeavor, but several of my friends will often come to help cook.
Last year, my friend Ashley arrived first to help prep the food. She showed up looking festive and stylish, as always, wearing a cute pumpkin-orange sweater dress.
“You look great! And I love that dress! So Thanksgiving-ish!” I gushed.
“Thank you! And look at my fingernails!” She proudly put out her hand for examination.
Her fingers were perfectly manicured with orange painted acrylic nails expertly shaped. Each nail portrayed a different thanksgiving image painted in excruciatingly tiny detail.
“Oh my gosh! Those look great!” I exclaimed. I couldn’t believe the intricate detail on such a tiny surface. “I can’t believe how much detail went into those tiny turkeys…” I mused as I examined them more closely.
A loud beeping from the oven reminded me that we had lots of work to do. I quickly set about giving Ashley jobs to help out.
Soon more friends arrived, and a gleeful cacophony embraced from the kitchen.
As the afternoon wore on, the table I had designated for food began to pile up with holiday treats both savory and sweet. Every time the oven dinged more was added to the array.
At one point, Ashley said she needed to speak with me. Her worry-stricken face made me nervous. What could possibly be going on? We stepped into the laundry room for privacy.
“Is everything ok? You had me so worried when you said something was wrong,” I said.
“Sarah, I’m so sorry, but when I was mixing up the giant batch of stuffing, this happened.” She held up a hand. I just looked at her, confused. She wriggled her fingers in response. And I noticed that all of her orange nails were still looking pristine except for her middle finger. The acrylic nail was gone leaving her own nail completely bare.
“Uh oh. So… are you sad because you lost a nail?” I said, befuddled.
“No! I’m saying I lost the nail IN the stuffing!” Ashley exclaimed. “And I looked through that entire batch. I can’t find it.”
“Yikes. Well, maybe it didn’t make it in the stuffing. Maybe it fell off before that,” I said hopefully.
“Yeah, maybe.” Ashley said, less hopeful.
We went back to cooking and setting the table.
Within a few hours, other guests started to arrive. I had asked my friends to bring pies because pie making is not my forte. The folding table I had allocated for sweets was brimming with pecan and pumpkin pies, way more than we would be able to eat.
It wasn’t long before my entire house was filled with all of my closest friends. After chatting for a bit, I made the Thanksgiving toast, expressed my gratitude for another year of friendships and good memories, and everyone started piling their plates.
I had arranged the table to be almost like a buffet, and when the first people picked up the spoon to the stuffing, Ashley and I glanced at each other. I winked at her in an attempt to calm her nerves.
Pretty soon everyone had made their plate and were either going back for seconds or getting dessert. The evening wore on, and I had all but forgotten about the fingernail.
My friend Kyle walked over to where I was sitting and chatting with other friends.
“So do I get a prize?” He asked.
“A prize?” I asked.
“Yeah I thought maybe there was something special in store for the person who found the little turkey.”
I looked at him completely clueless about what he was talking about.
“Like in a king cake during Mardi Gras, whoever finds the baby gets a prize,” he said. He produced Ashley’s orange fingernail that had a little turkey painted on it from his pocket.
“Oh! Yes! That turkey! Why yes, there is a prize!” I said, and saw the pie table was still stacked with pies. “You get to take home any pie you want!”
“Sweet! Thanks! This was a good idea to hide that in the stuffing! I almost swallowed it!” He said as he handed me Ashley’s nail.
I smiled sheepishly and glanced over at Ashley who had a huge look of relief on her face. I handed her nail back to her.
“Well that couldn’t have worked out better if I do say so myself,” I said, glad that an embarrassing crisis was diverted.
“Me too! But you know that now you’ll have to start making this a tradition,” Ashley said.
I chuckled. “Yeah, maybe. I better see if I can find an actual tiny turkey though, ya know, instead of one painted on a fingernail.”