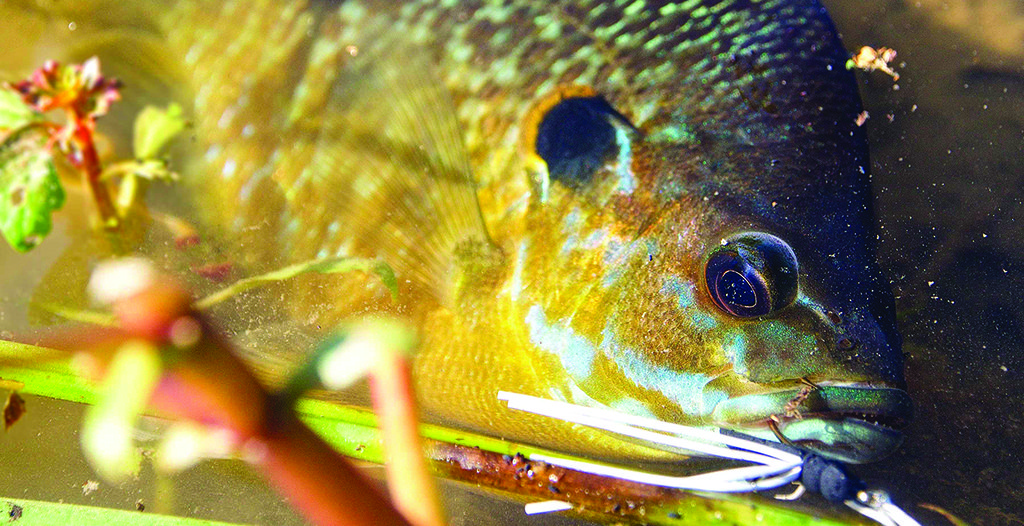 Sunfish… Memories of sunburst colors that put most tropical fish to shame still spring to my mind whenever I hear the word “sunfish.” While they’re a blast on the fly rod or ultralight, they don’t trigger the dump of adrenaline that a bass does. This is more an indictment of my calloused system than the fish, but it is what it is. The sunfish plucking tiny poppers from the scummed surface of a local farm pond elicit a deliberate reaction from me.

There was a time, decades ago, that an orange-bellied bull bluegill would usher in the shakes. A twitching cork float animated by an unseen force and then pulled under was the greatest thrill of my young life. I recall the leathery hands of mom’s dad, my Poppy, holding the dorsal fin flat as my chubby fingers traced around the copper sides and midnight blue gill flap before we threw the fish into a potato sack or strung it up on a nylon cord.

I remember Poppy calling some of the disk-shaped fish, what I would later learn are the Lepomis genus — the bluegills, redears, longears, pumpkinseeds and green sunfish — either “perch” or “sunfish.” There are not now and have never been real perch in any Arkansas creek or farm pond around my home region, but “perch” was the generic name he gave to any fish in the sunfish family that was not a bass. Poppy didn’t know that his perch were part of the sunfish family and that bass were part of that family as well. Sunfish was a name he reserved for only the most vivid of perches.

Back from the pond, Poppy would fill a five-gallon bucket with chilly well water and my job was to empty the potato sack or stringer into that bucket while he gathered a bowl, a knife and a towel. The late morning sun reflecting off of glistening scales and a clean knife as Poppy scraped and sliced was mesmerizing. And then there was the meal.

We ate our “perch” whole with the skin on and the tail fin intact. The tail fin was my favorite part of the fish. And, no matter how many fish I ate, I saved the tail fins for last. It was a greasy, salty dessert, a taste and texture that I’ve heard described as the best potato chip in the world. If memory serves, though, the description is wrong. I have not tasted anything — and I’ve scraped the bottom on many a bag of chips — that came close to tasting like fried perch tail.

I haven’t eaten many sunfish in the years since. As a product of the catch-and-release generation of anglers, I rarely eat any fish I catch. And in skipping out on this once vital component of fishing, the reason we started fishing, I’ve missed out on experiences and emotions from an array of perspectives — the nostalgic, the primal and, last but not least, the delectable.

But that will be changing and soon.

The bluegill, and a scrappy hybrid of bluegill and green sunfish, have been my teachers on the fly rod much like Poppy’s perch were teachers of the angling world as a whole when I held my first cane pole. Often willing and always feisty, the little sunfishes are there to show me what a bite looks and feels like, and when I should set the hook. Saviors also, they offer action when it seems that every bass in the water has lockjaw. And just the other day I decided that dinner would be added to their list of titles.

Nine palm-sized bluegill could not resist the fly kicking up spurts of muddy pond bottom through their nests, and nine bluegill rode home in the cooler. I sharpened the knife and reached into a wriggling mass of spiny dorsal fins to pull a glistening male bluegill from the water. His dark and prominent gill flap absorbed the muted rays filtering through an overcast sky but hints of peach and rose reflected from his breast. Luminescent teal highlighted his chin. I think he would qualify as a sunfish for Poppy.l