A starter kit of concern 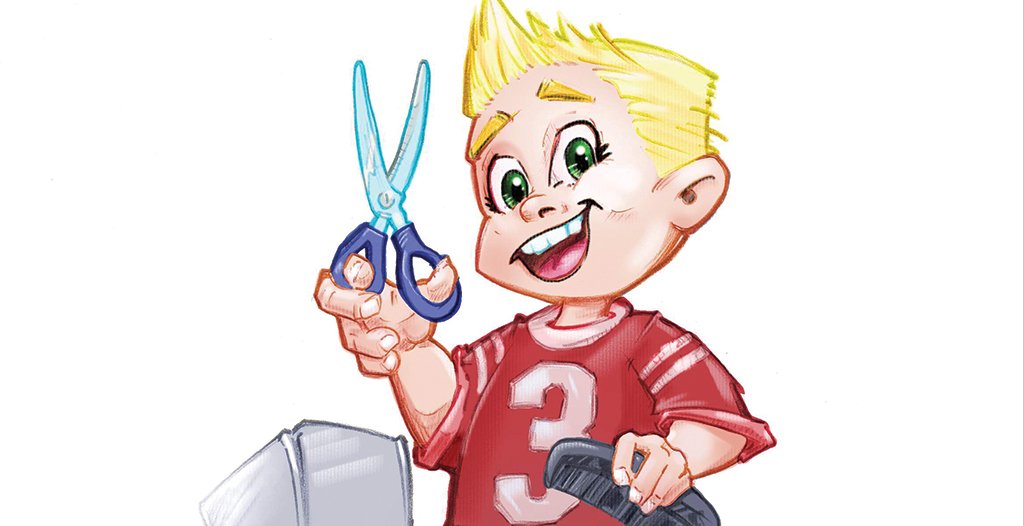 Any working mom can relate to having to bring their child(ren) to their workplace from time to time, and the dilemmas that can occur once they are there. I’ve been a hairdresser longer than my son has been alive, so he has basically grown up in my hair salon. Raff is now old enough to entertain himself pretty well, but it was much more difficult when he was younger. I’ve dealt with tantrums and meltdowns over everything from not being able to cut my client’s hair himself (when he was about three) to him getting into some nail polish and giving the salon bathroom a fresh paint job.

Life with Raff is never boring, to say the least.

One day last week, I had to go back to the salon after I picked Raff up from school for one last appointment. When we got to the salon, he was excited to see that I had received a few Amazon deliveries. He offered to open them for me, making swift work of freeing my orders from their boxes. Then he announced that he wanted to make a “hut” out of the empty boxes. I was just pleased he was keeping himself busy.

Over the next hour, Raff occupied himself with cutting the boxes into different shapes so that the four of them fit together quite nicely. I was genuinely impressed with his craftsmanship. He worked continuously on his hut until I finished my work at the salon for the day.

“No, I don’t have any here,” I said, as I looked out the window and noticed that it was raining quite heavily.

“Can we stop on the way home and pick up some supplies for my hut?” he asked.

“Well, do you have any of your own money left?”

“Then, yes, we can go by Dollar General, and you can go in by yourself. It’s freezing outside and now it’s pouring, and I don’t want to get out of the car.”

Raff gathered his boxes and slung his backpack over his shoulder, then made a run towards my vehicle. I switched off the lights and locked up the salon and did the same. By the time I got into my SUV, I was completely drenched.

“Are you sure you still want to go by the store? It’s raining cats and dogs out there,” I said as I grabbed some spare napkins out of my center console and tried my best to dry myself off.

“Yes I’m sure! I really want to build a hut!” Raff responded defensively.

I rolled my eyes, but still drove in the direction of the closest Dollar General.

When we got to the store, I pulled into the parking space directly facing the front doors. I rummaged in my purse to find Raff’s wallet (I always keep it in my purse so that it doesn’t wind up misplaced) and checked to make sure he did indeed have money in it before handing it to him.

“You have $18 in here, spend it wisely,” I lectured to Raff as he opened his car door and made a beeline for the front doors of Dollar General.

After about five minutes, I saw the store’s front door swing open and Raff ran back to the vehicle through the rain that was hammering down mercilessly.

“Oh my gosh, I’m soaked!” he exclaimed as he slammed the door closed.

I handed him some more napkins from the console to dry off with.

“Did you get what you needed for your hut?” I asked, as I put the car into reverse.

“Yes, I did. That woman in there asked me if someone was making me buy this stuff,” Raff said, motioning to his yellow plastic DG bag.

“The cashier in Dollar General. But I told her no, that I wanted to buy this stuff for myself because I have some cardboard boxes that I want to make into a hut so I can sleep in it tonight.” he stated.

I glanced over at him while I was waiting for traffic to ease up so I could pull out of the parking lot.

Raff obeyed. I glanced inside and was quite shocked to see that he had purchased a box cutter, some thin white rope, and a huge roll of black duct tape.

I groaned with embarrassment and looked into my rear view mirror, making sure the DG cashier wasn’t writing down my license plate number. I just knew that she either thought Raff was part of some nefarious kidnapping plot or that he was a poor, neglected, homeless child. Probably both!