AMOM – A Meeting of Minds 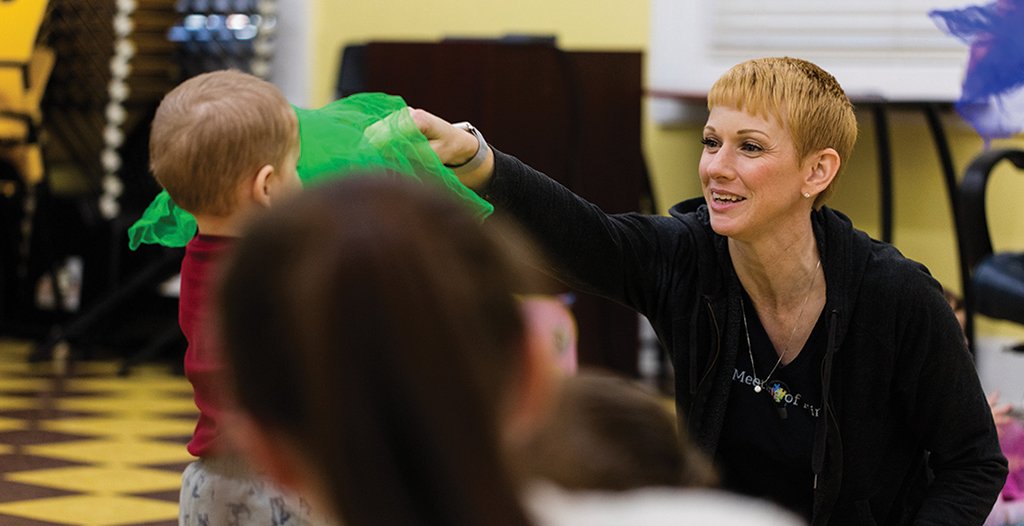 Colin was beautiful baby boy, but when he was 15 months old, he wouldn’t make eye contact. At two years of age, Colin was diagnosed with autism spectrum disorder (ASD). Colin’s mother Kim Keller struggled with her desire to connect with her son, and her determination sparked the creation of A Meeting of Minds (AMOM), an autism support nonprofit based in Russellville.

Autism was first recognized in 1942. But even in 2005, not many parents knew the best ways to nurture an ASD child. Kim was one of those parents. “There was such a disconnect between resources and me, Kim says. “I didn’t know where to look or what was available. I didn’t know what grants or services were available. The doctor had said to ‘Google it.’ I spent a lot of late nights Googling, trying to find support.”

Like many on the ASD spectrum, communication skills were difficult for Colin. “He couldn’t share information with me,” Kim says. “It makes you and your child feel vulnerable. They can’t tell you what’s going on in their world.”

Colin began talking some at four years of age, and Kim enrolled him in speech therapy, physical therapy, and occupational therapy in preschool at Friendship Community Care. “I would go into the therapist offices and ask what I could do to reinforce what they were doing at home,” Kim says.

Kim also sought to connect with other parents who were dealing with ASD, but she found no organized groups. “All of it was very isolating,” Kim says. “Everyone’s story is different, but if you can’t connect you’re alone.”

When Colin was in the fifth grade, Kim made her first real connection with a fellow ASD parent. That parent was Shannon Brown. “I had noticed that her daughter and my son were friends,” Kim says, “so I asked if she’d be interested in a play date. As time passed, I would ask other parents to join us. We’d meet at a park, bring our families, and the kids could play even if it was in their own little world. There was strength in that.”

By 2017, Kim and Shannon had started AMOM as a support group and began holding meetings. Their mission was to connect parents and caregivers with each other and to resources. The group meets at Russellville Christian Center once a month and usually features guest speakers with expertise in resources, information about Medicaid or any other advice on how to raise a child with special needs. “Here was the connection to resources that I never had,” Kim says.

The meetings are also broadcast live on www.facebook.com/amomsupport so parents/caregivers can attend online. “They [parents/caregivers] can comment or ask a question,” Kim says, “and we can ask the speaker to respond in real-time or parents can watch the meeting later.”

And the connections are spreading. New AMOM groups are forming in Conway and Morrilton. The first Conway event was in February, and the first in Morrilton will be scheduled soon.

AMOM also hosts four family events through the year: an Easter egg hunt, a first responders meet and greet, a Halloween party, and a fall fest. “Here, kids can be themselves with people who just get it,” Kim says. “Your child may have a meltdown, but you are among people who will offer support and empathy to help your child cope.”

The first responders meet and greet has been especially helpful in bridging the communication gap. One of the biggest fears of a non-verbal or non-communicative children’s parent/caregiver is their child or a first responder being hurt in an emergency situation. “These kids struggle with chaos, lights, noise, and alarms and may be frightened,” Kim says. So AMOM is educating both kids and responders. “Our organization facilitated special training for the police department that was autism-specific, “Kim says.

The idea of autistic awareness training for police officers was something Kim brought up in 2019. She called on Diane Varaday from the Arkansas Autism Resource Outreach Center (AAROC) to help. “The training made sense,” Captain David Ewing of the Russellville Police Department says. “The theme in law enforcement is to stay aware. This training helps officers recognize different approaches for people with autism in a crisis. It adds a useful tool to our toolbox for the community.”

At the meet and greet, kids interact with officers and climb through police cars. “It was a big hit with the officers, Captain Ewing says, “and we’re hoping to continue in the future.”

The first sensory-friendly Halloween party was held in October 2019 at the Pope County Library. Melanie Goad, children’s librarian and AMOM for children with special needs, oversaw the event. The Halloween party was a success with 40 children in attendance. “We plan to make it an annual event,” Melanie says.

The fall fest features silent fireworks along with traditional autumn festival activities. “We have a Bump and Jump, a hayride, food, and carnival-style games for the family,” Kim says.

Collaboration with other groups has also contributed to the success of AMOM. “We love to partner with and support what other organizations are doing,” Kim says. ‘It helps the kids grow in their social skills and have extracurricular activities.”

As examples, Community Connections offers free activities for special needs children including drama, bowling, and art. Connections Behavioral Health, a division of Friendship Community Care, offers counseling. Sensory Story Time is offered by the Pope County Library Children’s Department. “Singing, sensory activities, dancing, and stories are part of the mixture,” Melanie says. “It’s a unique story time for children with disabilities.” Melanie also brings a collection of books on topics like sensory processing disorder, bullying, and anxiety to the monthly AMOM meetings so parents can check them out at the meeting without a visit to the library.

ASD kids enjoy cinema, too. Sensory-friendly movies are arranged by Kristi Bartlett of River Valley Special Needs Support Group and shown at the United Entertainment Corp. Theater. “The lights are up a little and the volume is turned down,” Kim says. “And the Girl Scouts provide drinks and snacks.”

Since it is a nonprofit, funding for AMOM is through donations or grants. A Giving Tree Grant to fund resource binders for parents was one of the most helpful. Resource binders have tabs for the paperwork from therapists, doctors, teachers, and evaluations. It’s a better way to organize for parents/caregivers of ASD children. “The amount of paperwork is overwhelming,” Kim says. “When kept together in a binder it becomes a portable filing cabinet to share information with professionals.”

Those professionals are what’s known as the individualized education plan (IEP) team. An IEP Team consists of the ASD child’s special education teacher, a general education teacher, school therapists, and sometimes additional staff from the office of special services along with parents/caregivers. “This IEP binder contains the rules on how to deal with one child,” Kim says.

Brittany Turner, director of special education for the Russellville School District, says that the IEP is a way to define objectives. “If the child can’t meet the goals, you move the goal,” Brittany says, “but still push to achieve.”

Kim has attended many IEP meetings with other parents. “I’m there for support and to offer ideas,” Kim says. “The goal is for parents to feel like a valuable and equal part of their child’s IEP team.”

Kim says that her plans for the future of AMOM are to educate the community on the unique wiring of the autistic. “The CDC (Center for Disease Control) says that one in 59 people are diagnosed with autism,” Kim says. “That’s a lot of people. It’s their community too.” Kim says that exposing people to those who are not like them is key. “As long as we think of people with autism as other or different or something separate, how will they ever feel welcome in our society?” Kim says. “We’d like to remind people that people with autism deserve respect.”

Kim’s hope is that more families will connect with AMOM. “There is power in meeting face-to-face and sharing your stories with someone else who gets it. The candid conversations at our meetings are when parents connect with each other and share their experiences and often receive help from someone with a similar issue.”

Though, in-person fellowship is best, Kim wants parents/caregivers to know that they can still get help and a connection to other ASD parents/caregivers without attending meetings. “Sometimes it’s hard to reach out because you’re so exhausted from life,” Kim says. “We’ve been where they are, and we’re ready and willing to help. We don’t know all the answers, but usually know someone who does.”

To learn more about A Meeting of Minds contact Kim Keller at (479) 857-1849 or AMOMkim@outlook.com, or Shannon Brown (479) 223-2407 or AMOMshannon@outlook.com or on Facebook at www.facebook.com/amomsupport.