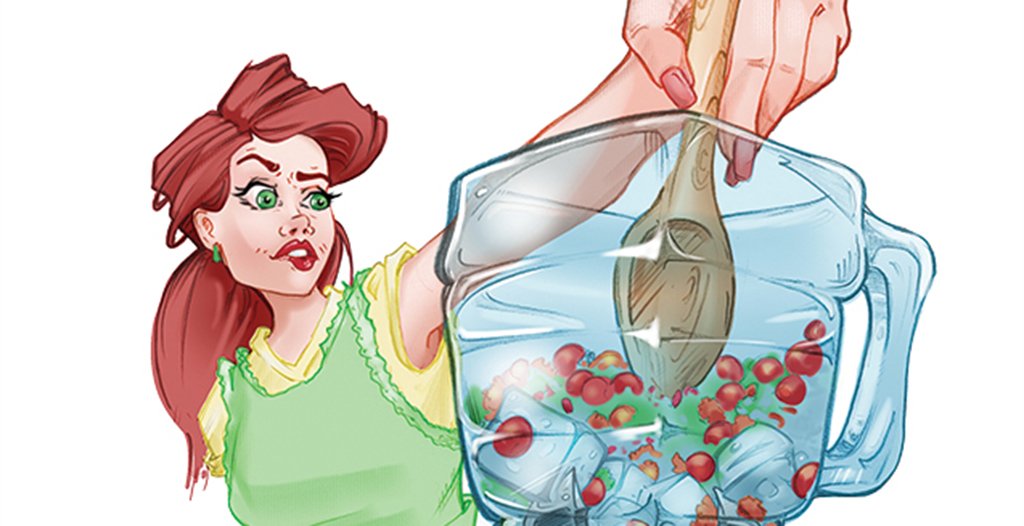 A few months ago, I decided that 2020 was the year I was going to get back in shape. My progress has waxed and waned from week to week.

My friends all have the same goal, so we’re trying to keep each other motivated — sharing healthy tips and recipes, reminding and encouraging each other to frequent the gym, and holding each other accountable to our health goals.

However, it always seems like it’s easier for some, more than others, to find the time to work out and make the effort to be diligent about meal prepping and clean eating. My friend Ashley is one of those “easier for some” people. Ashley has a flexible work schedule and doesn’t have children. But she is a great cheerleader for the others in our group.

One Friday we went to lunch and she told me about a great smoothie recipe. It was a high-antioxidant smoothie with cherries, goji berries, pomegranate seeds and raspberries. It sounded delicious. She recommended using a Vitamix brand blender or a Ninja brand blender to make sure the berries and the ice were smoothly blended.

I don’t have either of those types of blenders. Instead, I have a $25 Walmart special that I’ve been using for years. I’m not a big fan of really expensive kitchen appliances unless it’s something I can truly expect to use everyday, for instance, a refrigerator. But I thought that surely my cheap blender could handle the job.

After work that day, I went to the grocery store to pick up my smoothie ingredients. While I was at the store, my sweet friend Kala called to see if Raff could spend the night at her house that evening. Raff and her son Dragan were good friends. I, of course, agreed that he could but said I would need to pick him up midmorning for his basketball game. Kala volunteered to bring him home if I could drop him off at her house that evening.

That evening, after I dropped Raff at his friend’s house, I contemplated making a smoothie for dinner. I decided to wait until the next morning so I could take it with me to Raff’s basketball game and not be tempted to purchase an over-priced bottle of water from the concession stand.

The next morning, just as I was loading my cherries, goji berries, pomegranate seeds and raspberries into my blender, Kala called to say she was on her way to drop Raff off at my house. We ended the phone call and I sat my phone down, placed the top on the blender, and pressed the “puree” button. The blender came on with a roar and started crunching and crushing the ice and fruit together. Suddenly, it started making a lagging noise. I switched the appliance off as I bent down to inspect the blender pitcher more closely. It looked as if a chunk of ice had wedged itself between the base of the pitcher and the blades causing them to not turn properly. I stirred a wooden spoon around in the pitcher and poked at the hindering chunk of ice, quickly dislodged it, replaced the lid and hit “puree” again. After another few seconds, it happened again. So I picked up my spoon, poked at the chunk of ice in the way, and hit “purée” once again.

The very instant I pushed the button I realized that, this time, I’d skipped one crucial step. “Oh no!”

As red berry mixture was flung every direction and all over my kitchen, I lurched towards the base of the blender while being pelted with ice chunks and bits of berry. Just as I reached the blender and went to hit the off button, a pomegranate seed launched into my left eye causing me to miss the “off” button, and press the “liquify” button.

The blender surged and roared louder as more red liquid sprayed. With one eye squinted shut, I fumbled around on the blender, managed to hit the correct button, and the blades of the blender came to a halt. Just then, my front door opened and three shocked faces looked at me with wide eyes.

“Mom?” my son asked in a nervous voice. “What happened? It looks like a murder scene in here.”

I slowly glanced around. My entire kitchen was drenched in a bright red sludge that was slowly oozing down every surface and dripping on the floor. It did indeed look like a horror movie murder scene.

“Well, you see… I was trying to make an antioxidant smoothie.”

Luckily, my friend Kala isn’t phased by much. She immediately took control of the situation and instructed Raff to show her where I kept the towels and cleaning supplies since I was drenched in red goo and rendered pretty much immobile as I didn’t want to risk getting it all over my beige carpet.

About an hour later, my kitchen was clean, sparkling, and had a hint of fruity aroma. I was so grateful for Kala’s and the kids’ help. We missed Raff’s basketball game, but I was thankful to not be bathed in berries anymore.

Then my phone rang. It was my friend Ashley.

“Hey! Do you want to go to the gym with me later today? And did you try that smoothie recipe?” she asked.

“Umm… Well I attempted to try it. And no, I’m pretty sure that I’m going to order pizza, have it delivered and sit on my couch all day. I’m pretty exhausted from having to wash berries and seeds out of my hair,” I explained.

“It’s a long story, but I don’t think I’m going to be making any more smoothies for a while. I’ll tell you about it some other time.” I got off the phone, and as I reached over to sit it down I spied a red pomegranate seed stuck to one of the legs of my coffee table. No, there would definitely be no more smoothies in my immediate future.​