A Bird in Hand 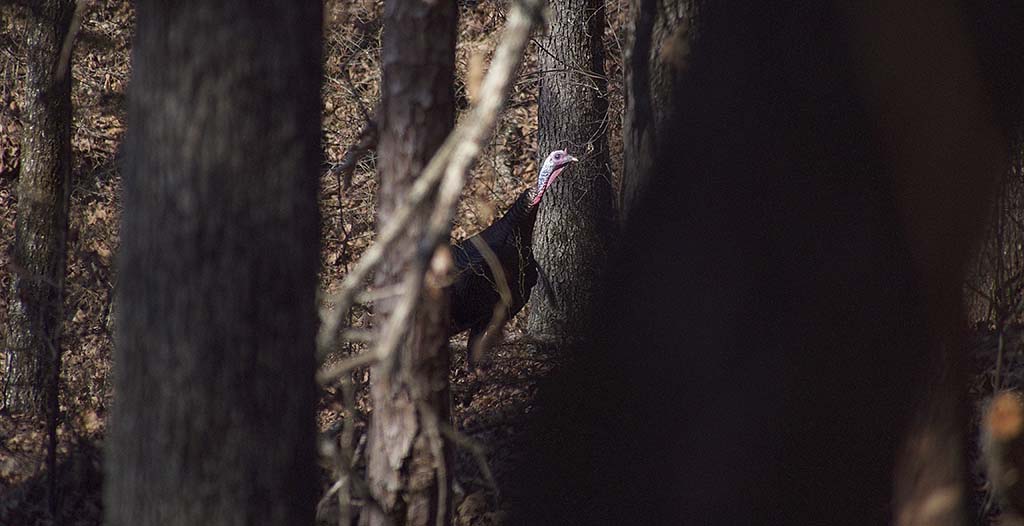 Faint streaks of pink already stretch over the mountains. I’d lingered over that second cup of coffee too long.

I shove shells into the shotgun and set off at a fast walk to my listening spot nearly half a mile away. Whip-poor-wills whistle a lonely farewell song to the night as the strengthening voices of diurnal birds fill the woods. I haven’t heard a crow yet, and that’s good news. In my experience, crows and turkeys usually clock in at the same time.

The first nasal caws ring out as I step up onto the old sweet gum stump. From a quarter-mile away, a throaty gobble erupts in response. This will be my fifth morning to hunt this particular bird.

Our first two encounters were anticlimactic. His coarse song called up some girls right off the limb on both of those mornings, and I sat cussing the hens as his gobbles faded over the ridge. I should have killed him on the third morning. And I would have if he’d come out of the thicket where I thought he would. But he came out hard to my right, at an angle too steep for a right-handed shooter of my particular inflexibility.

On the fourth morning, I slipped into the woods early — two hours before sunrise

— and mustered every smidgen of stealth in me to ease within 50 yards of the tree he’d roosted in for three nights prior. I sat there in the gloom feeling smug in my cleverness, thinking about how much he would weigh and how good his breast meat would taste, the shape and sharpness of his spurs. I almost felt sorry for him. But as the first cardinal song ended, he gobbled from a different tree 200 yards away. He had no time for my foolishness that morning. Just one gobble then not another peep.

He’s in yet a different roost now. Two more gobbles let me course the sound, and I think I know which tree. Maybe not the exact tree, but within 50 yards, near a favorite deer stand in a grove of thick-trunked white oaks with limbs as big around as my thigh. The grove is at an intersection where the main ridge splits into three fingers with each descending to the creek. I’d hung a treestand there because whitetails love traveling those ridge fingers. Spring gobblers love them, too.

I make it to within 100 yards of the turkey while he’s still on the limb, gobbling at the crows, at screaming pileated woodpeckers, and a braying jackass on a distant farm. But the woods open up from here on to the bird. I choose to sit for a bit, to let him fly down and decide on his next move before I decide on mine.

Thumping wings tell me he’s on the ground. He gobbles again a few times, obligingly, letting me know where he’s headed and how fast he’s walking. And I know right where he’s going. As predicted, the next gobble sounds a little muffled and more distant, but he hasn’t gone that far. The turkey has walked into a shallow hollow full of red cedar.

It’s the exact best thing he could do to better my odds.

With topographical cover to move, I hustle through the brightening woods and just about go too far when a gobble from no more than 50 yards away plops my butt down. The closest cover is a skinny hickory, far too thin to hide my silhouette, but the only tree available. Turkey eyesight borders on the supernatural and with nothing but a smattering of saplings between us and that scraggly hickory behind me, one tiny miscalculated move or involuntary shiver could blow the whole deal.

I slowly suck a call into my mouth and hunker down, trying for all the world to look like a stump, with the gun pointing toward that last gobble. I’m a little worried that all the ruckus on this breezeless morning might have spooked him. But when I offer a couple of soft, seductive clucks, he quickly gobbles back to let me know that everything is cool. And then I hear his footsteps walking toward me.

A brilliant white head emerges from the cedar boughs and stops behind some brush. I can see flashes of his barbaric red caruncles as he peers up the ridge looking for the sweet-voiced hen. The range is just under 40 yards, right at the maximum for my little 20-gauge shotgun. But that thin brush surrounding his head is a concern. All he has to do is take two steps either way for an open shot. But the turkey stands stock still for a tense minute and then walks back exactly the way he came, never offering a clear target.

Just out of sight, he gobbles again.

For those who don’t hunt them, or otherwise spend time in close proximity to gobblers in rut, tom turkeys make a peculiar sound when they’re really turned on that’s difficult to describe. You don’t hear the sound as much as you feel it. It’s a nearly subsonic booming, like the deepest bass thumping from a subwoofer, and it resonates in my chest when I’m close enough to the turkey. Accompanied by a sharp “check” sound, this booming is called “spitting and drumming.” This ol’ boy spits and drums, gobbling and double gobbling so close, but just beyond range and mostly obscured in his little depression. The woods vibrate with his masculine energy.

It’s a powerful energy. Contrary to the human mating game, the natural order of turkey courtship is for the hen to come to the gobbler. That’s how it’s worked out for him so far this spring. Eager hens are harder to come by now, later in the season, but his confidence is still sky high. He’s got game, and he knows it. I can just see the tips of his tail feathers and the very top of his chalky bald head slowly parading back and forth as he struts, so sure that his vocals and virile charisma will, again, get him laid.

The gobbler popped out once to lay eyes on the hen and, more importantly, be seen by the hen. He likely won’t come out again.

I’m long past the strategy-making point. Changing position is out of the question. I’m too close, too exposed. Regardless of what happens, it’s going to happen here. I have no choice but to wait him out and, since I’m barely hidden, I can’t call.

After a nerve-wracking 30 minutes of me listening in silence to the turkey’s romantic pleas, he decides to take another angle on the stubborn hen that just won’t succumb to his charms. The tom comes up out of the bowl in a determined walk and circles me, gobbling all the way, ending up at about 30 yards hard to my left — the perfect position for a right-handed shooter and the perfect range for my shotgun. The safety is off. The shotgun’s bead is on his throat.

A muted cluck warbles from my mouth. He stops, standing in the wide open, straight and tall and handsome as the devil.

And I don’t shoot.

Seconds later, he smells a rat, gives an alarm “putt” and flaps across the hollow. I slump against the hickory, struggling to make sense of what just happened. No one will believe this. I don’t believe it.

I’ve lost 10 pounds and hours of sleep since the season opened. My work and, consequently, my finances have been sacrificed, as they are every turkey season. Family activities have been shuffled so that I have maximum opportunity to put a turkey on the table. The objective of turkey hunting is to kill a turkey. Why didn’t I squeeze the trigger?

I sit for several puzzled minutes and never come up with an answer. Then, like warm spring rain, realization washes over me.

I know where I’ll be when the sun comes up tomorrow.