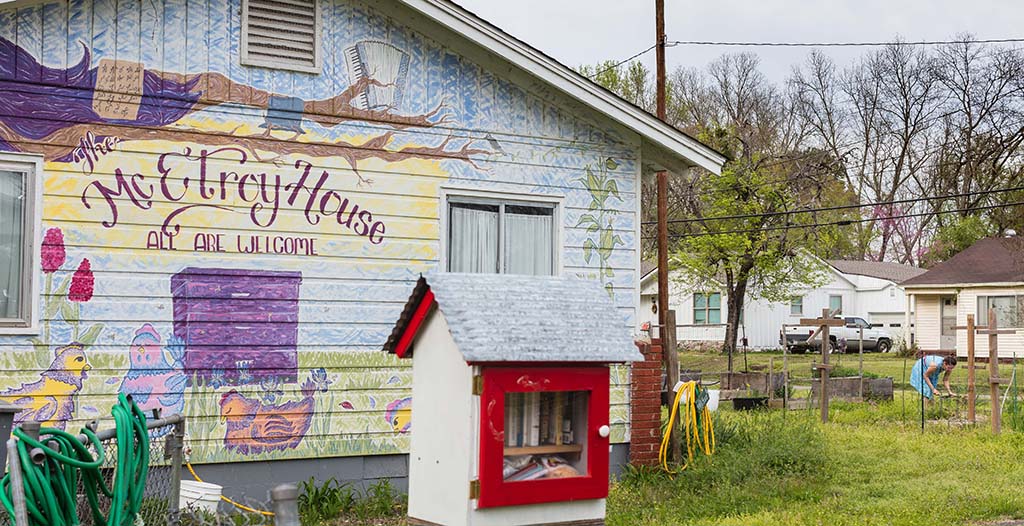 Tucked away in the heart of Dardanelle rests a decades-old house that is more than house. Gardens surround the charming abode. Butterflies and bees flutter about the yard. With its soft white siding, cozy porch and an elder pecan tree towering over the backyard, the little structure could be just another delightful home here in this small river town. But the colorful murals decorating its south-facing exterior wall tell you this house is different. This building is also a symbol of acceptance and progress in the Arkansas River Valley. The house, known as the McElroy House, is also home base for a blooming nonprofit of the same name. It’s unique as non-profits go, teaching people that they can take matters into their own hands and tackle problems themselves through pooled resources and effort.

“We don’t want to be an organization that tells people how to do stuff,” says Meredith Martin-Moats, a co-founder of the organization and owner of the house. “That’s not who we are.”

“I learned from him that people in white communities take for granted that we can just do genealogy and history work,” Meredith says. It’s a privilege that the African American community doesn’t enjoy. The harsh and dark truth is that prior to emancipation, a paper trail for African American family records was a rarity “It’s much more difficult and takes a certain skill set to research genealogy before the Civil War,” says Meredith.

But Michael’s projects eased some of that cultural pain and helped people feel more in touch with themselves, their community, and their culture. It also forces a community to study history more objectively. “I always knew I wanted to go back home at some point and do some community work,” Meredith says, ”But I didn’t really know what that meant, and I think working with Michael taught me that we need more people willing to be honest about our history.”

Meredith originally planned to move back home much later in life, but as she was finishing her master’s degree, her mother was diagnosed with terminal cancer. Meredith and her husband moved back to Dardanelle to be with her.

A month or two after her mother passed, a grief-stricken Meredith roamed the yard of her maternal grandparent’s home that had now been passed down to her. Meredith had spent a lot of her childhood there, roaming around the yard and visiting with company on the porch. It had always been a place of fellowship.“My grandparents always had people over,” Meredith says. “It was just always a place that I remember being very welcoming.”

As those pleasant memories soothed her, she noticed an iris sprouting from the ground in the place that her grandfather’s garden had been. After over twenty years, one of her grandfather’s plants was still surviving. “So it was kind of in that moment, I was like ‘I need to do work like Michael is doing and I need to do it here,’” Meredith says. She decided to call the organization The McElroy House to honor her grandparents’ name. The iris still blooms on the property today.

Meredith was several months pregnant with her twin sons when she began creating the nonprofit. Because the space is considered residential, she needed a special use permit from the City of Dardanelle. “I remember that very well because I was very, very pregnant when I gave that presentation,” Meredith says laughing. “It was really hard for me to breathe.”

The Dardanelle City Council voted unanimously to approve the permit. The only requirement was to have a parking space. “It had to meet city code basically,” Meredith says. “So that was the hardest thing because that little piece of asphalt where you park cost us about $2,500.” The fundraising for the parking space was difficult, but a little more than a year and a few pie sales later, they had raised the money they needed.

In order to execute their mission, the McElroy House provides programs that enrich culture through support and education. What they choose to do is usually dependent on what is requested by the community. The gardens are their most popular projects. Because of limited space and manpower, their food garden can’t operate like a typical community garden but more like a model. “They’re not like a community garden in the sense that we create a lot of food for people, Meredith says.“We can’t do that; we don’t have a staff. So what we can do is just have little examples.”

Through these gardens, people are taught skills such as how to make a raised bed or which native plants work best in a butterfly and bee garden. “Every year we dig up more of the front yard just to add more of those butterfly and bee plants,” Meredith says. Within the native flowers, there is also a memory garden. This is a space where people can remember loved ones they’ve lost by painting a rock with their name and placing it in the garden.

The McElroy House also hosts a weekly craft night, a free library donated by the Dardanelle High EAST group, and a cloth diaper bank with participants from all over the country. Around six times a year, the McElroy House hosts something they call “living room conversations” or “skill shares.” They invite a local expert on a particular topic to speak about that topic. These conversations open a supportive and progressive dialogue while in the comfort of the living room.

The biggest challenge that the McElroy House faces is the misunderstanding of their mission. Most non-profits perform a specific task for the community. This organization is more focused on bringing the community together to solve the problems themselves.

“A lot of times our community already has the answers to a lot of problems we face, but rarely do people get together to actually have those conversations,” Meredith says. Too often, conversations end because of a disagreement. Members of the McElroy House believe that when the conversation stops, progress also stops. Their goal is to teach people how to communicate across differences so that the conversations survive. Healthy communication takes respect for other’s beliefs and soundness in your own at the same time. “It’s strength and vulnerability,” says Cary Donahue, a member of the McElroy House board of directors. “Whenever we have large groups of people gathered, you can just feel everyone being open and communicating. It’s a hard feeling to describe,” she says.

The most effective way to solve a problem is to hear from all sides of the issue, and The McElroy House is embracing the diversity in our community to explore how our different experiences can offer different tools needed to tackle social issues. “We’ve had living room conversations where I have seen a Methodist minister, a Muslim woman, some people who identified as Wiccan, and people who identified as Southern Baptist and they were all in the same room and having a conversation,” says Meredith. This kind of tolerance is necessary when doing community work so the McElroy House strives to create an environment of acceptance. “It’s a place where anyone can be exactly who they are,” says Lisa Huelle, another board member.

The McElroy House’s impact on the local community is impressive considering the limited resources they have to work with. Every member of the organization is a caregiver, employee, or both. “Nobody has an abundance of extra time or money,” says Meredith. “We’re all raising babies and we’re all working jobs.” But what they lack in quantity they make up for in quality.

Passion is the most powerful resource and every person involved with the McElroy House is overflowing with it. Through their work they are inspiring others to be passionate as well, because collective devotion to our communities is how we make them better.