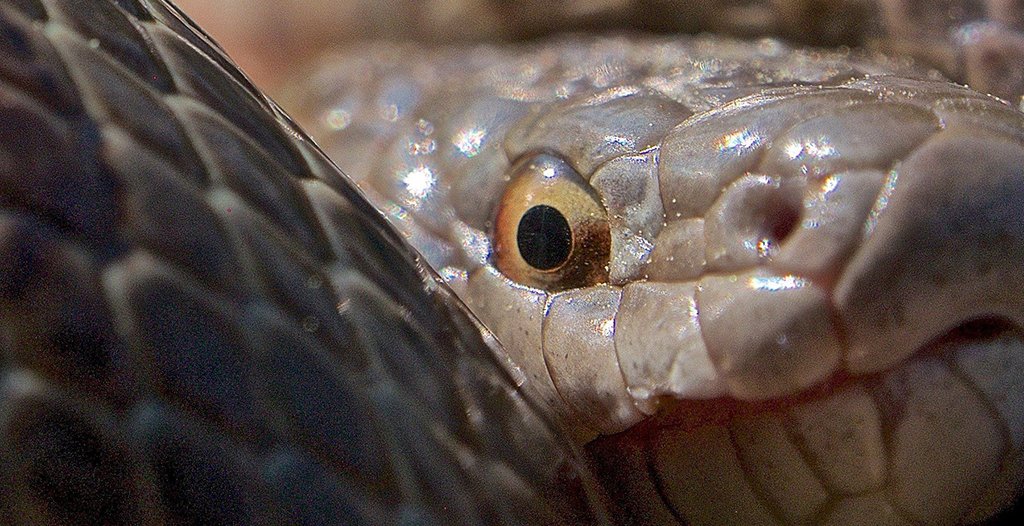 I had seen a few snakes in my early years, but my first real introduction to a serpent came at 6 years of age and was courtesy of my pigeon-toed, gruff-voiced grandfather. Poppy always had a critter under glass (a mason jar) to show me when I got off the school bus at his and Granny’s house. Mostly it was lizards and frogs, sometimes an interesting insect like a cicada, which we called a jar fly. But this time there was a rose-bellied, black-backed legless creature coiled around the jar’s bottom. Poppy nor I knew it at the time, but it was a western worm snake.

Even as Poppy explained that the snake was harmless, a low-humming voltage tickled my spine and tightened my stomach. A distinct and delicious forbiddance was in the jar, literally. Poppy said that Granny was livid about the whole thing, to not talk about this at the dinner table or even mention it when we went inside for the evening. And, come to find out, she had indeed forbidden Poppy to show me the snake. Granny told me years later: “I told him to take that thing back to the woods and kill it, to NOT tell you about. Oh, I don’t know why he did that. We fought about many a thing, but showin’ you that snake was near the top.”

But damn the woman’s order, Poppy showed me the snake and more. He gently poured the tiny loops onto his farm-thickened fingers, and I watched it slither between his digits, its quick pink tongue tasting humid air. Poppy handled the delicate reptile with a gentleness that surprised me from a man I’d watched gut and clean piles of fish. As he talked about where he found it and how he caught it, the snake settled into his calm, weathered hand looking like the picture of contentment. Then he said it was OK for me to touch it, but to be easy, to be careful. I did.

And my mind was opened.

I can’t be sure about what the old man was thinking by showing his grandson how to identify, catch, respect and enjoy snakes, but I like to imagine he wanted to pass down a sense of wonder and respect for all lives, even the lowliest, mixed with a smidgen of his subversive orneriness. If that was his plan, Poppy succeeded likely beyond his expectations.

Since that time, I’ve been the weirdo snake advocate in any bunch. When folks on a hike run away, I run toward. Whenever I hear the rattle of a buzzing tail against dry leaves, my pulse quickens with anticipation rather than fear. I didn’t see a need to tell my wife of three months about my ophiophilist tendencies, and she went bonkers watching me chase down a water snake for the first time. Her stammering near-hyperventilation put me in the awkward situation of having to choose between helping my recently betrothed take a seat on the creek bank before her shaky legs plopped her in the water, and holding on to the snake to admire more of its savage beauty. I’m proud to say I chose wisely. We’re still married 24 years after the incident.

In spite of Poppy’s lessons, I’m not sure why I feel a need to touch snakes. You can easily appreciate something, especially a reptilian something, from afar. I don’t know why the feel of serpentine muscles coiling with a quiet certainty around my hand is so intriguing, the cool smoothness of whispering scales so appealing. But through my teenage and young-adult years, a nonvenomous snake within grasp was often gently captured, examined, admired and then released unharmed—kingsnakes, rat snakes, hognose snakes, garter snakes, ribbon snakes, water snakes, worm snakes, brown snakes, racers, red-bellied snakes, green snakes and probably some I’ve forgotten.

And then I’ve also danced with the devil.

These next few paragraphs feel like they need a disclaimer: I do not in any way condone the catching of venomous snakes by nonexperts. It’s stupid. It’s monumentally stupid. But (you knew there’d be a “but”) that inexplicable need for a tactile connection led me and my younger cousin, a snake-charmer pupil of mine too young to remember our Poppy, to capture and admire an approximately 5-foot timber rattler. I was 37 years old and, supposedly, the most responsible among the cousins. We were an hour away from the nearest town, which was still 15 minutes from a hospital, and would have surely died or been permanently maimed had either of us been bitten.

Sometimes, as I lie in bed not too many years later, the memory of that day comes back, and I shudder at our foolishness. But in the full light of day, I wouldn’t trade the moment.

For anyone else outside of two men old enough to know better on the banks of the Illinois Bayou that afternoon, the rattler was an embodiment of menace, a thing to be feared. But fear was the furthest thing from my mind. There was a knowledge in the narrow, slitted pupils, the broad triangle head, the venom-filled jaws, the muscular tan and brown body accented with coal bands down to a black velvet tail punctuated by bone-colored rattles.

Since that day, I’ve had other close encounters of my choosing with other venomous snakes but have counted coup only once more. It’s not something I’ll ever do again. The urge has dissipated. I rarely capture even nonvenomous snakes nowadays, preferring to only observe.

But a subtle stirring still slithers through my soul when I encounter the striking new-penny colors of an Ozark copperhead. I still get downright giddy about a cottonmouth cloaked in the swampy hues of death no matter what shade—bronze, brown or midnight—it’s wearing.

While a viper’s camouflaged pattern gliding along the earth represents a near irresistible attraction to me, it takes on a more ominous tone now that I’ve got a granddaughter. She’s a little cotton-top girl who follows Pa around the yard looking for critters under every log and in every rock pile. Though a little apprehensive, I’ll still introduce her to the beast that creepeth. I’ll invite her to admire, to respect and even to touch. And I hope to pass on what Poppy passed on to me. I want her to be wise yet fearless, smart yet brazen. I want her to reach out for knowledge even if it could be dangerous.