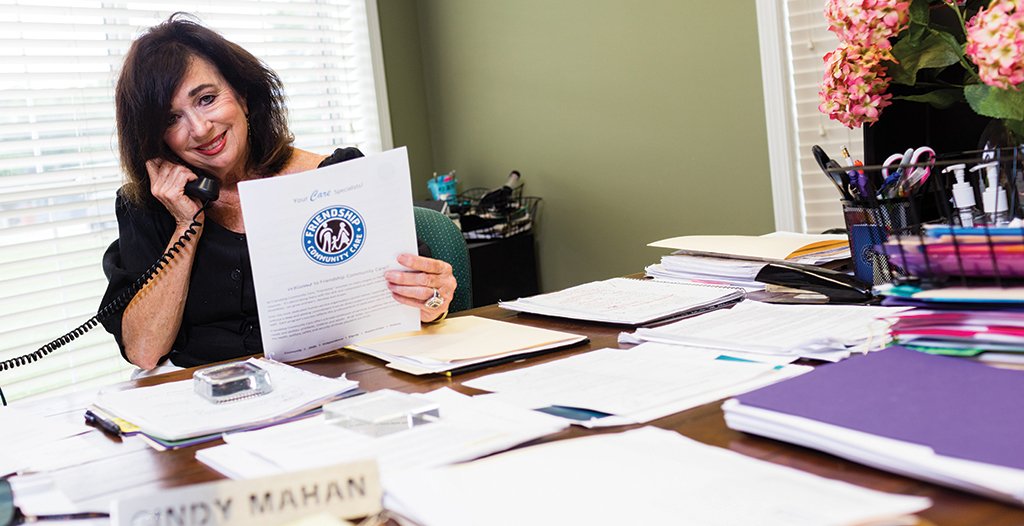 Cindy Mahan has always offered a helping hand. Service was a consistent part of her childhood within her large and gracious family.

Cindy’s parents owned a hardware store called May’s Store in Marshall, Arkansas. Cindy along with her brothers, sisters, and cousins worked shifts at the store while maintaining their grades in school. They also dedicated time and effort to assisting the less fortunate in their community. Every week, Cindy’s family delivered groceries to families in their community who didn’t have transportation or to individuals with disabilities who struggled to leave their homes. “We gave to everybody,” Cindy says. “That was the life of our family.”

Cindy’s family also chose to employ individuals who typically struggled to find work. “People who had not been given a break,” Cindy says. Her parents, uncles and aunts helped many struggling people by giving them a positive and stable work environment as well as genuine friendships. “We took care of everybody through the hardware store,” Cindy says. Employees were invited to family holiday gatherings, and if they weren’t able to drop in, food was always delivered.

The humanitarian virtues of her family laid the foundation for Cindy’s mission to aid those who are struggling in whatever way she can. “I’ve always had a heart for individuals who didn’t have what I had or what we had,” Cindy says. “So I’ve always felt the need to help people.”

In high school, Cindy was involved in leadership roles and graduated as the student body president and valedictorian of her class. “I would always look for what I felt needed to be done to ensure that things were fair,” Cindy says. Through these roles, she was able to express her passion for helping people while also developing leadership qualities. While attending the University of Arkansas, Cindy was a member of the Tri Delta sorority where she took a leadership role once again. She graduated with a master’s degree in science with an emphasis in child development and a minor in psychology.

When Cindy moved to Russellville, she wasted no time in getting to work. Through grants, she was able to open up a classroom for children ages 5-13, the first realization of Friendship Community Care (FCC). The school operated in a two-room building on Skyline Drive in Russellville that now serves as a fire station. “The only thing we heated with was just a big stove and the bathroom was about 40 or 50 feet outside,” Cindy says. “But that didn’t bother me at all. I knew that it was just the beginning.” I can hear her smile as she speaks of the curtains made and donated by the parents, and her husband making early morning rounds to pick up the students because they did not have a bus. One family even drove from Tilly in extreme northern Pope County every day to drop off their child. “All that was done without any thought; I knew that it shouldn’t be any other way,” Cindy says. “I knew that the future and my advocacy was going to assure life in the River Valley for individuals with developmental disabilities. In the beginning, FCC had only two employees and enrolled 10 children. But within a year, a second classroom was opened with 20 children.

Through more grants and painstaking work, Cindy was able to get FCC’s current facility up and running. That building is the home of Friendship Pediatrics with more than 40,000 square feet of service space. She created programs and services for adults with disabilities in the community. Cindy’s forward thinking and passionate dedication allowed FCC to make an impact from the beginning, finding ways to make the programs and therapies more personalized in order to increase the quality of care.

“For example,” Cindy says, “many families had to drive to Little Rock just for specialty evaluation services and all the therapies. We finally developed those within our community and then we spread it throughout the rest of the state.” Some of the services offered are developmental therapy, occupational therapy, pediatric child development, and prevocational training. One vocational program is called Job Path with a goal to create more jobs for individuals with disabilities while also giving those individuals chances to intern out in the community. Another vocational program is Project Search. This program presents vocational knowledge in a classroom setting before moving the participants into internships. “They truly have an opportunity to be in jobs before they are hired,” Cindy says. Many employers throughout the community, such as Saint Mary’s Regional Medical Center along with Embassy Suites Fayetteville hire program graduates.

FCC often collaborates with government agencies such as with the Community of Champions, an advocacy program funded by the Arkansas Governor’s Council on Developmental Disabilities and powered by Friendship Community Care. Community of Champions strives to educate, inspire, and empower peer advocates, self-advocates, and state leaders to understand the importance behind advocacy and how it brings our communities closer together, in turn growing our state to its maximum potential.

According to FCC literature, “too often, at the corner of disability and advocacy stand community members all across Arkansas that hinder true acceptance due to a lack of knowledge.” One of the challenges facing our families and children of FCC is people who aren’t aware of the issues these individuals face.

Community of Champions and Friendship Community Care offers tools each person can use in their daily life, promoting true acceptance and inclusion for individuals with developmental disabilities. Community of Champions is striving to spread support through education to support Advocacy and grow committed “Champions” for this program.

Today, FCC serves roughly 2,000 individuals and employs about 1,700 people around the state. Cindy is particularly proud of their behavioral health services. To make things easy, FCC strives to have all the services their individuals need in one setting. “Like a one-stop company,” she says. Cindy also spoke fondly of the executive staff she works with to keep everything in motion. “The team that I have now is very strong, and they are knowledgeable on the latest and the best processes and opportunities that can be used for children with disabilities,” she says. This well-equipped team of about 60 therapists is always searching for new therapies that could benefit the individuals that go to FCC.

This year, Cindy is preparing to retire from Friendship Community Care, but her work isn’t done yet. In October, she will become CEO of the Friendship Foundation. In this position, Cindy will be working with a board of directors with members from all parts of the state. “Our goals will be using the wonderful relationships and the newly developed ones,” Cindy says,” leveraging for endowments, gifts, and many other ideas for the expansion of Friendship.” A few ideas for expansion are already in the works as well as sustainability initiatives to ensure that FCC will be a lasting organization.

Cindy has also spent a lot of time on the political side of things. Throughout her years of service, she has worked with our governors, congressmen, and even presidents. “I’ve worked hard to establish rules and national associations that are dedicated to protecting our services,” Cindy says. There were many times in the early 2000s when the future of Medicaid was unsure. Cindy worked with President Clinton and his administration to ensure that services like that will not face that uncertainty again.

Cindy Mahan is a giver through and through. From an early age, giving has been her life and her culture. “It’s just part of our hearts, part of our being to help the people in need,” Cindy says. “When I look back or walk in these buildings, I don’t ever think about what I’ve done, I just know it happened.” Because of her passion and forward thinking, many people throughout our state have been given life-changing care and opportunities that might have seemed impossible before.

Cindy also shared her appreciation for and the importance of the board of directors. “Service of our board members through years of volunteering safeguards a program that is invaluable to the community,” Cindy says. “It’s brought tens of thousands of jobs to our communities and allowed our children, adults, and families the dignity of life as it should be.” Cindy says that the culture she’s cultivated at FCC is one of kindness, of treating staff and families with the utmost respect. The legacy of Cindy Mahan will continue through FCC employee efforts to sustain that culture and drive it forward.