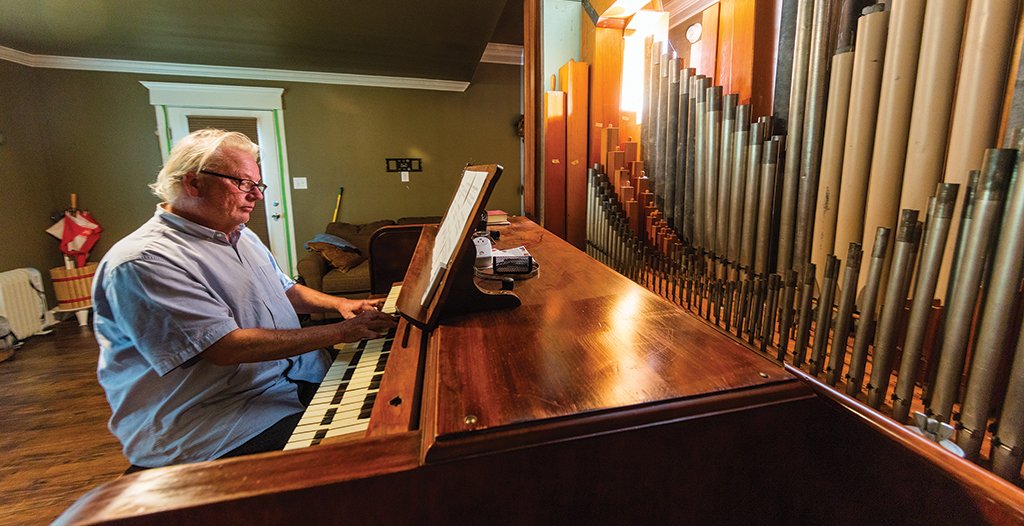 Bruce Moore has loved the dramatic sound of the pipe organ his entire life. He learned to play the instrument at Arkansas Tech University back in the fall of 1975.

“Witherspoon Hall was the music building, and it was one year old when I started,” he says. “And, of course, they had that big, pretty pipe organ, which is still there although it’s not playable. I eventually transitioned over to the piano, but I still like to get on the organ. It’s known as the king of instruments. I love the sound of it. I love the mechanics of it. I love how it produces sound. If you ever hear a huge pipe organ, it will shake your soul. You can feel the floor of the church vibrate, and it’s just amazing.”​

The pipe organ gets its sound by driving air through the organ from a keyboard. Each pipe produces a different pitch, and the air is moved through the instrument with a foot pedal. The pipes are in rows called ranks, and the instrument has one or more keyboards played by the hands and as well as a keyboard, called a pedal clavier, played by the feet.

Because of the continuous flow of air, an organ is able to sustain notes for as long as keys are pressed, something impossible for a piano.

This, combined with its massive pipes — which can sometimes fill the entire wall of a building — are what give the pipe organ its gigantic sound. The smallest portable pipe organs can have two dozen pipes with the largest organs boasting over 30,000.

The original pipe organs were built in the third century BC by the Greeks. It’s the oldest instrument still used in European classic music that is derived from Greece.

The pipe organ first began appearing in churches around 900 A.D. By the 1400s, they were established in cathedrals across Europe, used for festivals, church services and for choirs.

And now, thanks to a little luck and a lot of effort, Bruce has a pipe organ sitting in his den.

“I bought this organ from a gentleman named Hank Humphries, and it was located in Danville, Virginia,” Bruce says. “I’ve always wanted a pipe organ, and I didn’t think I would ever find one that I could afford. But I was searching online one night, and this guy wanted $2,000 for it. So I started emailing him back and forth, and I decided I would buy it.”

But then Bruce had to figure out how to get it from Virginia to Arkansas.

The organ, a Kilgen Petite Ensemble, was built in 1948 by the Kilgen Organ Company for the Sacred Heart Roman Catholic Church in Anniston, Alabama. In 1965, it was purchased by someone named David Anderson, a junior in high school and the son of a preacher. Anderson allegedly spent 18 months rebuilding the organ and installed it in his garage in his home.

Eventually, it ended up with Humphries who installed it for his wife. The instrument has 244 pipes, some made from metal and some made of sugar pine. Those pipes fit into an enclosed case, which Bruce said likely weighs more than 500 pounds alone.

Suffice to say, it wasn’t going to be easy to move. Bruce said he enlisted the help of one of his friends, Michael Robbins, an attorney in Russellville.

“I hollered at him and said, ‘How would you like to take a little road trip,’ and he said, ‘Dude, I love road trips. Where are we going?’”

Bruce laughs at the memory. “I sort of roped him into that.”

The two left Dover and dismantled the organ, but getting it out of Humphries’ house was no simple maneuver. “So we were able to get it on dollies,” Bruce says. “and his [Humphries] idea was to take it out the back of his house and off a deck that was, like, eight feet off the ground. He wanted to put it in a truck then drive it around the house to the U-Haul. When I saw that I said, ‘We can’t do this. We got to have help.”

Bruce says Humphries knew some firefighters who had a moving business on the side, so the pair agreed to split the cost of hiring them.

“That was the only way we were going to be able to do it,” Bruce says. “These guys show up, and one of these guys, I swear to God, his arms were as big around as my waist. These three guys got ahold of this thing and picked it up and lifted it down into the truck. It took them like 15 minutes to have it loaded up. I think they charged us $350.”

Now the pipe organ is in Bruce’s house. And it’s loud enough to wake the neighbors.

Bruce says he plays it two or three times per week, hymns mostly.

“I don’t have any favorite songs because I like so many pieces,” he says. “I’m not an organist by trade. I’m a pianist. An organ is a lot different than a piano. Usually, I will play hymns. I love to play hymns. A lot of the old Lutheran hymns are wonderful. I don’t do any of that Phantom of the Opera stuff. I’m not into that, and I’m not good enough.”