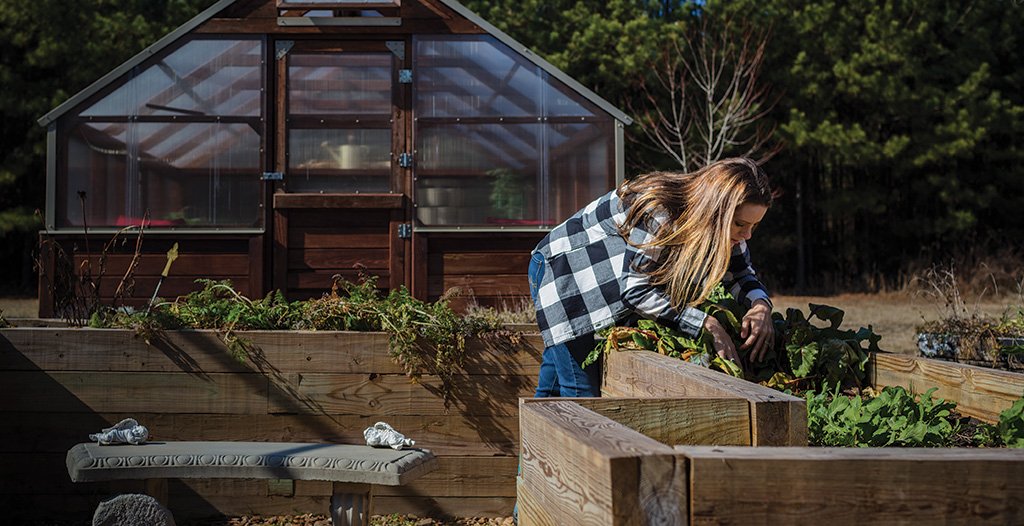 While it wasn’t something she intended to do, Jill McSheehy returned to her family roots. Gardening is in her genes. Jill’s mom was a gardener and her grandfather was a cotton farmer in eastern Arkansas. But while one might assume she has been gardening since childhood, Jill describes herself as a self-taught gardener. And that didn’t happen until just a few years ago, after she left full-time work.

“My mom had a garden while I was growing up,” Jill says, “but I had nothing to do with it. I didn’t pay attention.

The running joke is that when I was a teenager, my mom asked me to go pick a pepper and I asked her what it looked like,” she laughs. “It just shows how much I paid attention to her gardening.”

Grownup Jill is now a wife, mother, gardener, blogger, author, and teacher in her own way as mentor to beginning gardeners. Jill began her foray into gardening in January, 2013, after working full-time for 10 years. As a stay-at-home mother with a two-year old and a six-year old, delving into the role of full-time gardener, author, and mentor fell into place naturally.

“In one direction, I wanted to help grow our food to help with the grocery budget because we were losing my income,” Jill says. “So on a practical level I wanted to save money. But the more I got into it, the more I realized I really needed that outlet of gardening. Having gone from a full-time job to being home with kids, it was quite a different experience, and it gave me something that I could do as a person along with the transition of being a stay-at-home mom.”

She explains that in her old job it was easy to measure success but that assessment is difficult for raising children. “When you’re a parent, you don’t have all that right away,” Jill says. “Sometimes you don’t even know until they’re grown.” The garden provided more immediate and tangible results. “For me, it [the garden] gave me something I could work toward,” Jills says, “something I could be successful at.”

The kids enjoy the garden, too, though on a limited scale. “My 10-year old now doesn’t remember what it’s like to not have a garden,” Jill says. “She was out there at a younger age. She helps me quite a bit.” But Jill notes that while they can help in the garden, she doesn’t force them to do it.  “They like the harvesting better,” Jill says. “When it’s time to harvest carrots, they love doing that. They’ll go pick blueberries as long as they can snack on some.”

Eventually, partly through this total family involvement, Jill knew her desire to garden was more than hobby.

“It became part of my lifestyle,” Jill says. “I do remember that first year. I was exhausted, thinking ‘do I want to do this again?’ And then there was part of me that was like, ‘how could you not?’”

Working the soil had found a place in her soul and shown her some deeper truths in life and in her faith.

“A lot of the spirituality in the garden is just observing what’s happening,”Jill says, “spending time praying while I’m weeding, just being quiet. Having that communication with God that doesn’t come if I’m not still. The garden makes my mind be still.” Jill says she often hums “This is My Father’s World” while working intently.  “I feel close to my creator,”Jill says. “Gardening makes my mind be still while my hands do rote work.”

Jill, a self-described introvert, says that both introverts and extroverts can love gardening. “Extroverts really enjoy connecting with other gardeners,” Jill says. “Whereas an introvert, to me, that’s my escape. That’s where I can go listen to a podcast or audiobook or just sit in silence. But, an extrovert may not find that as appealing. My best friend is an extrovert. She loves coming to help me in the garden. I think part of it is because she likes the conversation while doing the work. The two personalities probably need something different out of their garden.”

When she’s needed alone time this winter, Jill goes to her new greenhouse. “It’s been so nice to be able to go out on cold winter days when it’s sunny,” Jill says, “to see my early plants growing. They give me hope for spring. I think, lately, that’s been my favorite place. The kids joke that that’s where I live half the time because I’m just in there enjoying the sun in the middle of the winter.”

Jill also found a link between gardening and her aspirations from long ago.

“My life goal, ever since I was in college, was to write Bible studies,” Jill says. “That’s what I thought I would be doing, writing ministry for Christian women and doing Bible studies. And, I did do that. I self-published the two Bible studies and wrote a couple of books. But the gardening thing just took off so much I realized that’s what people wanted to know more about.”

Jill says that, as a Christian, she felt some conflict. She wondered if it was wrong to go into the secular. “But the more I prayed about it and followed what I was led to,” Jill says, “the more I felt like my life goal now is to get people in the garden and then also share my faith in God. If I can bring more people to the garden then that gives them the opportunity to encounter Him.”

But bringing people to the garden means helping them overcome obstacles to gardening, like a lack of space. “You can start small where you are,” Jill says. “There are so many people who are gardening on balconies in urban areas. I hear about those every day, people that will just grow an herb on their windowsill. Even that very small herb gives you so much of a reward. You don’t have to have a huge space.You can just start with what you’ve got, where you’re at. I certainly didn’t start out with all this.”

And then there are other insecurities for the first-timer. “I’ve encouraged people not to be afraid of failure because it’s through that failure that we learn the most,” Jill says. “When you start, and you just try, even if you learn what doesn’t work you’re learning.”

Jill cites a recent social media exchange as an example. “I had someone tag me on Instagram the other day and she was getting ready to start her seeds,” Jill says. “She was like ‘my fall garden was very disappointing. I got four peas. Four. Not four plants. Four peas!’ And then she was talking about starting again this year. Go into it with a mindset that you’re probably not going to do it all right. You are going to have some failures, but be ready for that. Then just embrace the good things that do come. Something’s gonna work. Just take those disappointments as learning opportunities for next time.”

And when then things do work, the results are delicious. Jill admits that it’s hard to choose her favorite dish from the garden. However, bruschetta from fresh Golden Jubilee tomatoes and fried okra get top billing.

“My family, my husband and kids, would probably say fried okra. That, to me, has heritage because my mom grew okra and she fried it in good old Southern style,” Jill says. “I do the same thing and they all love it. The last couple of years I’ve been making bruschetta with fresh tomatoes. My favorite tomato to make that with is the Golden Jubilee. It’s a very bright orange. It looks like the sunset, and it’s got a sweet enough flavor. I personally don’t like the taste of fresh tomatoes. I never have. But when you add it to everything that’s in the bruschetta, the garlic and the basil, it’s really good.”

While much of gardening has remained the same over the past century, our grandparents would have been astonished by the thought of learning how to grow and maintain potatoes through handheld computers. But with each upcoming generation of gardeners who had no one to teach them, Jill’s digital following has also flourished.

Jill says that looking back on her mother being a gardener and on her grandfather being a cotton farmer in Eastern Arkansas inspires her because she feels that, in a way, she came back to her heritage by accident.

“In more of a present-day sense, I think the people that inspire me are the people that I’ve been able to connect with through my website and through my podcast,” Jill says. “So many of them in 2020 became brand new gardeners. They had just enough success to be starting their second garden, and they’re more excited than ever. Hearing their stories of how they may not have been perfect their first year, but they enjoyed it enough that it’s become a lifestyle for them, too. For me, it was such a life-change when I discovered the garden. So seeing other people discovering it, too, inspires me every time I hear a story like that.”

One recent afternoon, while agitated with the Arkansas River Valley weather, I joined Jill on her gardening journey via podcast as she discussed timing for tomatoes, peppers and cool season crops. I had never used the podcast app on my iPhone before. It was a joy to hear the wisdom of this inspiring, and yet inspired, gardener on that cold winter day. I wondered if she was sitting in her greenhouse.

Jill McSheehy has authored books Glory in the Garden: 31 Days of Devotionals, Flourish: Discover How the Mystery of Compost Holds the Key to Experiencing a Fruitful Life in Christ, and Vegetable Gardening for Beginners: A Simple Guide to Growing Vegetables at Home.