A row of beans can help 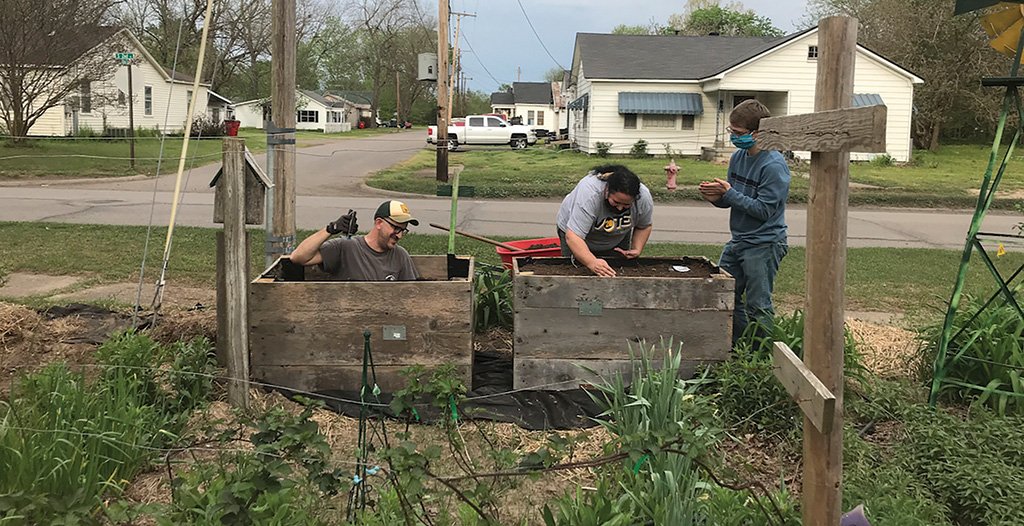 I’ve been volunteering with the McElroy House organization for years now. It’s an organization I helped to found, but it’s very much a collectively led effort. We strive to carve out spaces, to bring people together across differences. And we come together to share skills and ideas, and, lately, even language.

Thanks to the wisdom of Dr. Alejandra Carballo, associate professor of Spanish at ATU, we’ve recently started hosting bilingual garden nights/noche di jardineria every Friday from 4:30 until dusk. These gatherings are pretty much exactly what they sound like — we get together to work in the garden and we speak in both English and Spanish while we work. With the exception of Dr. Carballo, most of us are beginners or intermediate speakers (at best) in our second language. But what we lack in fluency we make up for in an eagerness to learn. So we listen to one another, swap new words, pull some weeds, laugh, stumble through a language we are learning as adults, and plant seeds.

Thanks to the ladies I’ve met at garden night, I’ve learned lots of useful, new vocabulary I can’t imagine picking up anywhere else: hormigas (ants), grillos (crickets), cebolla (onion), frambuesa (raspberry) and araña (spider), just to name a few. I’ve become better at conjugating verbs, figuring out when to use “ser” and when to use “estar”, and I’ve had conversations about the different varieties of squash (calabasa) and natural fertilizers (conejo/rabbit poop is always a winner). I’m nowhere near fluent, but few things make me happier than being able to communicate about squash and rabbit poop in another language.

I’ve done community work for more than a decade now, and I’ve learned that even when everyone in a room already speaks the same language, our fears and cultural divides can make it hard for us to let down our walls and work together. Sometimes that’s smart, of course. Not everyone is a trustworthy person. But sometimes what’s really getting in the way of a new connection isn’t our own Spidey sense of trust or a well-developed intuition. It’s just our own insecurities. What if we are misunderstood, we wonder. What if we say something stupid? What if we just aren’t liked? What if I get hurt? But a lot of those same insecurities lose their edge in a garden. There is something about getting your hands in the dirt and watching the butterflies (mariposa), dragonflies (libélulas) and bees (abejas) fly around with such purpose and abandon that has a way of allowing us to drop a lot of our pretensions and just show up as our full selves. Or at least it’s an invitation to do so. Learning a new language can be especially scary and overwhelming. A row of beans can help.

The garden nights haven’t been going on that long, but I’ve learned so much already. I’ve heard stories about a cousin in Mexico who has the best dirt (tierra) around. It’s his compost recipe, and he teaches all the kids in the community how to make it. I’ve heard about intergenerational gardens in Dover that feed families. I’ve watched my kids quickly make new friends over dirt and vines. And I’ve shared my own stories about my grandfather and the irises that still grow at the McElroy House. If you know where to look, there is evidence in this spring garden of the work we did last fall. The tulip bulbs we planted are bright with red and pink. And the elderberry bush (baya del saúco),donated last year and planted in the backyard during the height of COVID, is now growing tall and sprawling outward. In a year or so we’ll have elderberries for syrup.

None of us set out to turn these garden nights into story circles. I really do wish we had been that smart. But instead, the idea for these gatherings happened organically (overused pun, sorry). The garden needed to be worked. And some of us needed English practice and some of us wanted to learn Spanish. Thankfully there are brilliant and giving people like Dr. Carballo who can speak both languages fluently and help make the gathering possible. Someday, those of us in attendance will be fluent, too. And so here we are now, tending to two birds with one stone.

These events are open to everyone, even if you aren’t a language learner. Just come join us and dig in the dirt! You can find us every Friday from 4:30 until dusk at 420 S. 2nd Street in Dardanelle. Look for the rainbow chicken mural. You can’t miss it. If you want more information, email mcelroyorganizers@gmail.com.