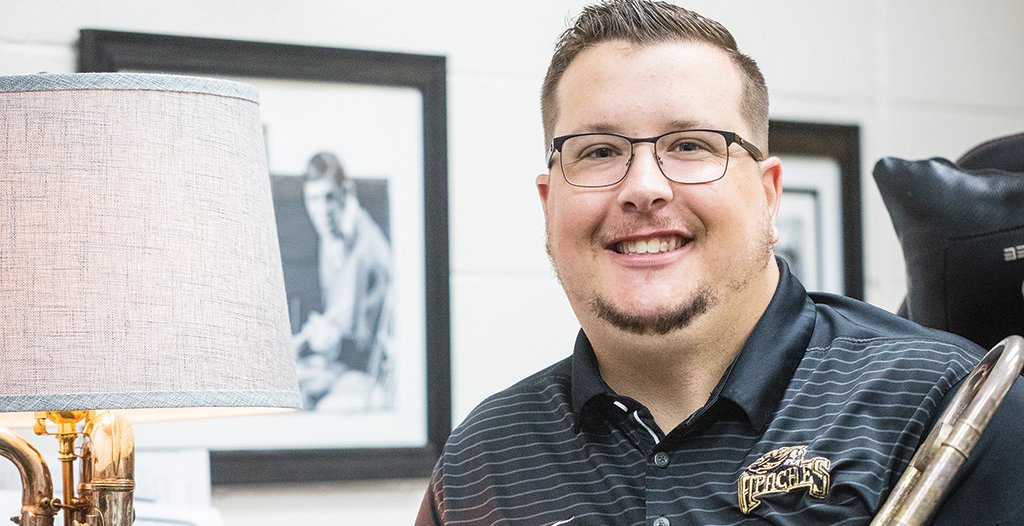 Age: 29
Hometown & Years in the River Valley: Magnet Cove, Arkansas. Been here for two years.
Occupation: Director of Bands at Pottsville School District.
Family: Wife Kelsey and son (he’s on the way and we expect him October 20th) Lucas.

The Inheritance Series by Christopher Paolini was my favorite book series. It was a series of four books: “Eragon” (2002), “Eldest” (2005), “Brisingr”(2008), and “Inheritance” (2011). In 2002 when the first book came out I was 11 years old and the main character was 16. By the time I finished Inheritance in 2011, I was 20. So over nine years of my life, I was enamored by the trials and tribulations that the Eragon went through in only a short year in the story line.

I am definitely a dog person. My wife and I have two: a husky named Demon and an Aussie named Teddi. Being allergic to cats also helps make my decision.

3. What do you think is the most positive aspect of living in the River Valley?

The most positive aspect of living in the River Valley, for me, is the beauty of it. I am an avid outdoorsman. I bow/modern gun hunt, fish, and just love being outdoors. There is nothing like working a 16-hour day or competing at a contest and leaving to a sunset over a ridge and then waking up to a sunrise every morning. Unless we are leaving at 4 a.m. for a contest or getting home at 2 a.m. from a football game. Not much to see in the pitch black.

4. What is something no one would ever guess about you?

I am a gear head. I grew up tinkering and working on small engines with my father. When I was seven, I took apart the carburetor on my three-wheeler. With dad’s supervision, of course, but I cleaned it and put it back together.

5. What is your favorite music genre and artist?

Depends on the day of the week. I listen to J. Cole, Kendrick, Hank Williams, all the way to Count Bassie Orchestra. I literally will listen to anything and find something that I can respect and appreciate from the listener aspect. That’s one thing I really love and appreciate about music. There is a song or musical work out there that can invoke or cancel any feeling. You just have to be openminded enough to listen and explore to find it.

When I get the chance, I really nerd out on video games. I have a pretty elaborate PC set up with a couple of monitors and some pretty good equipment. I play a variety of games, my favorites are Rocket League, R6, and Warzone. It’s crazy, but I have more money invested in my PC than I did in my first truck.

7. If you could change one thing about the River Valley, what would it be?

I really don’t know what I would change about the River Valley. I haven’t really lived here long enough to see what it has to offer. The first year I was trying to get my feet under me in a new job and the second…well…pandemic.

8. Where is the one location in the River Valley that you would tell a first-time visitor that they must go?

The first place I recommend visitors go in the River Valley is Mt. Nebo. However, they need to stop at Taylors gas station on Old 124 off of Weir Road to get some chocolate gravy and biscuits for breakfast before they go.

I am a big fan of burgers out of these choices. I really enjoy grilling, and I make way better burgers than I do the others. However, I do make really good turkey tacos with black beans and queso. So tacos are a really close second.

10. What is your favorite quote? Could be from an inspirational person, could be an original.

Be who you are and say what you feel, because in the end, those who matter don’t mind and those who mind don’t matter.