A Common Thread with the Past 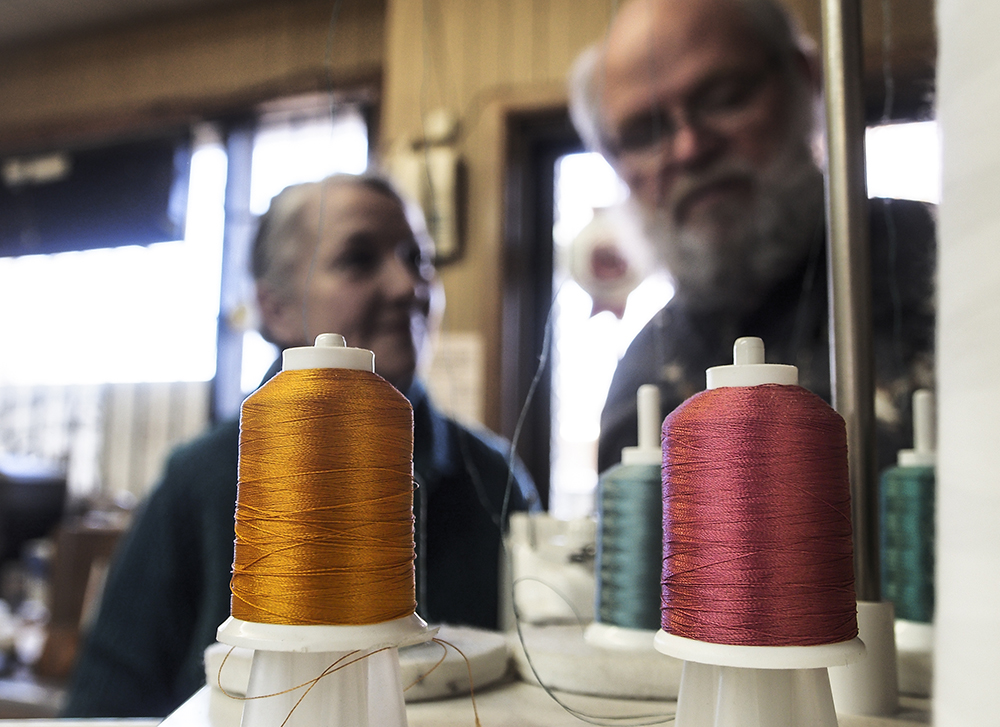 Sewing has been a survival tool for eons. According to Archaeologists, Stone Age people used antler or ivory needles and thread made from animal parts to stitch together hides for clothing and shelter to insure their survival in harsh climates. Hunters supplied the raw materials while family members prepared the skins and stitched them into usable objects. But it wasn’t until 400 B.C. that the development of yarn and woven fabric ushered in the age of hand sewing.
With women in charge of sewing hand stitching developed into a fine art, since much of a woman’s time was spent maintaining the family wardrobe. In fact, up until the early 20th century fine sewing was such a prized skill that young women could woo potential suitors on the merits of their expertise with a needle and thread.
In the early- to mid-1800’s the first sewing machines were built and women’s work has never been the same. Not only did the sewing machine fuel part of the industrial revolution and provide work for millions of people including women and children, it allowed housewives more time to pursue activities like volunteering and working outside the home.
The availability of ready-made clothing and linens by the mid-20th century eventually made sewing all but obsolete, and home sewing started a slow decline. While sewing is still taught in schools today, young people have little idea of the importance of sewing and the sewing machine as a major force of change in the world.
Home sewing has regained popularity in recent years, perhaps due to DIY shows and reality fashion shows on TV. To keep up with modern attitudes sewing has even adapted new terminology, and today both men and women are simply called “sewists.”
Mrs. Dora May Johnson, wife of the late Raymond Johnson who opened Johnson’s Sewing Machine Center in Russellville more than 50 years ago, recollected that when she was growing up in the 1930’s and 40’s  only women sewed at home. “As I spent time in the shop with Raymond, I became aware that there were not only seamstresses (women who sew) but also tailors, men who creates clothing etc.”
Dora May, who is an octogenarian and had never heard the word “sewist” before, also found it very interesting that the masculine and feminine terms for those who sew had changed to more a gender-neutral  term.
Whether you call them sewists, seamstresses or tailors; baby boomers are taking up quilting and sewing in growing numbers. Consequently, sales are rising for fabric, sewing machines and specialized equipment like quilting machines, embroidery machines and Sergers that bind and finish seams for a professional look.
Still, it can be difficult to find a retail sources for sewing products and services today. Russellville is fortunate to have Johnson Sewing Machine Center in town since 1966.
Raymond Johnson began repairing and servicing machine for the public in the late 1940’s when he worked at the Russellville shoe factory repairing its equipment and machines, explained Karen Lawrence, daughter of Raymond and Dora Mae Johnson.
Because of Johnson’s expertise, co-workers brought their machines from home so he could repair and service them in his spare time, said Lawrence. “Raymond would work on them during his break time or bring them home to work on. He was of great integrity and never did this on the factory time clock,” she added.
Eventually the shoe factory closed, but before that happened people from other places had started bringing Johnson their machines to be serviced. Word traveled of Mr. Johnson’s proficiency. Johnson’s Sewing Machine Center and its “sewing machine man” soon became household words in many River Valley homes, said Lawrence.
The business by its current name began in the mid 1950-60’s, said Lawrence. “At that point, some folks were still sewing on the old treadle machines and rejected the “newfangled motorized contraptions.” I think they held tightly to their treadle machines because they appreciated the leg exercise that running a treadle machine required from the tilting back and forth movement of the treadle. Meanwhile, others began to purchase electric sewing machines that performed more than just the treadle’s straight stitch. These electric machines became popular with their additional functions and because they were easy to carry,” she added.
Because of their diversity, Johnson’s has continued to thrive while other shops have folded, said Lawrence, whose husband Raymond carries on the business. “Raymond continues to service his customers with equal respect and retains all needed components to thoroughly furnish the customer with the items needful to their preferred artistry. Courteous respect and diligent customer service are two constants that should never change regardless of the ongoing changes in technology and techniques. This equals the Johnson attitude!”
When visiting the shop at 510 E 11th St. in Russellville, you’ll find that Raymond is the “man with the plan” to fix your machine, hear about the newest sewing innovations and, in the words of Janome ( a popular sewing/embroidery machine manufacturer  they represent)  encourage you to “dream… imagine… and create.”