Seafood with South of the Border Spice 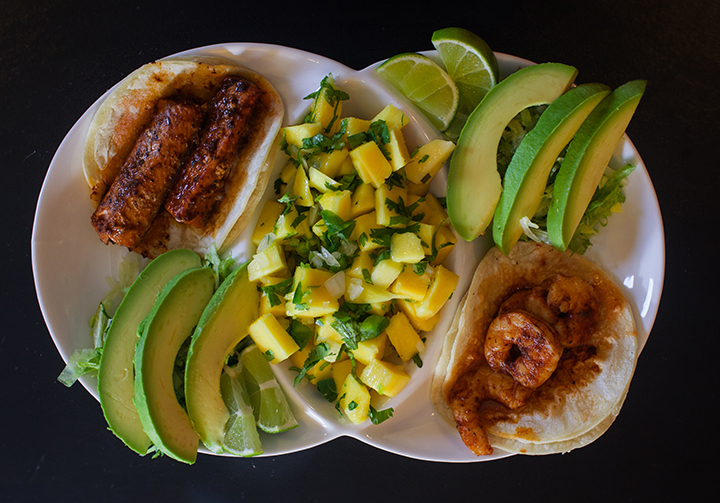 Mexican food is one of the more commonly hybridized ethnic foods. Finding Mexican food with pure south of the border ingredients is tough. Tex-Mex is often labeled Mexican, but once you get past the tortilla there’s a lot of American influence on the dishes. Nothing wrong with that, Tex-Mex is delicious, and you’d be hard pressed to find traditional food from any culture that hasn’t been tweaked by other cultures. Such is the evolution of food. Still, there’s something to be said for getting back to the original defining ingredients of a culture’s cuisine.
There are regional differences in authentic Mexican food. The Yucatan Peninsula features pork and native Mayan ingredients such as chaya (spinach tree leaf) in many dishes. Southern Mexican fare is strong on corn tortillas and chicken as the main meat ingredient. Northern Mexico food tastes similar to Tex-Mex with flour tortillas, beef and refried beans. And the Baja region is known for fish tacos made with fresh caught Pacific seafood. A staple seasoning of many Mexican dishes regardless of region is chipotle.
Chipotle is smoke-dried jalapeno. Drying was an early form of food preservation in Mesoamerica centuries before the rise of the Aztecs. It was used for both meats and vegetables. But unlike most chile peppers, the jalapeno’s thick flesh wouldn’t dry completely in the sun so a smoke-drying process was used to ensure proper curing. The name for the resulting smoky, spicy pepper comes from the Aztec word, chilpoctli, meaning smoked chile.
When you find a plate of authentic Mexican food in front of you with the colors and smells of the food regions blended, you know it’s going to be good. And the Tony and Mary from Tarascos in Dardanelle is just such a plate.
What you get is fresh mango salsa nestled between one shrimp taco and one salmon taco, both covered in that spicy chipotle seasoning. It’s a blend of color and texture, sweet and spicy that delights the eye as well as the palate. And after that first taste, as the smoky pepper mixes with the salsa’s cilantro, you’ll savor the flavor of culture south of the border.