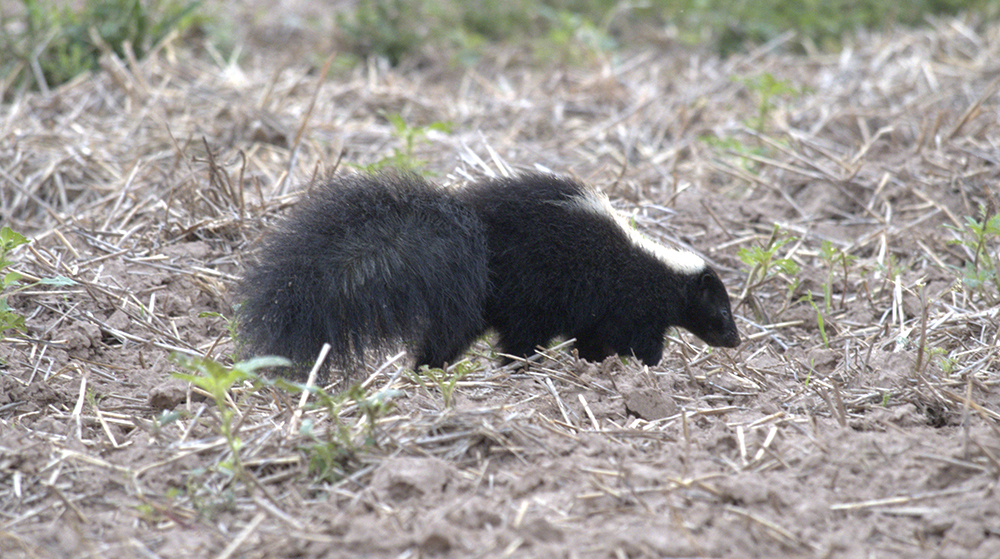 During the last week or so, the drive into town has turned into an obstacle course. I’m constantly jerking my steering wheel this way or that to avoid some hapless, flattened critter. Road kill typically peaks at this time of year and in the fall as hibernating and semi-hibernating animals are on the move. What I’ve noticed more than anything are dead skunks, and dead skunks don’t lie. When you start seeing dead skunks it’s almost spring.
Skunks aren’t true hibernators. They spend some extended periods cozied up in dens during cold weather, but they get outside the den often during the winter. What sets February and early March apart as prime skunk moving time is their libido. Yep, we’re in the skunk “pre-rut” phase.
Female skunks typically have a home range of a half mile up to two miles. Once they find suitable habitat they tend to homestead throughout their years on Earth. Male skunks, on the other hand, will search far and wide for a willing partner every year at this time. They can travel up to five miles in a single night whilst looking for love. They often look for love in all the wrong places, like in the middle of a two-lane highway. We all know that skunks are equipped with chemical weaponry. This weaponry has proven effective on almost every type of predator that would try to maim a skunk, but it’s worthless against a Chevy closing in at fifty-five miles per hour.
The skunk has relied on its noxious yellowish-green spray for protection since, well since skunks came into being, and they don’t have much in the way of athletic skills. Add all this up and you have a recipe for road kill on a grand scale. Once things settle down, around late March, we should notice a decrease in skunk carcasses.
After the drama that accompanies breeding season, there will be seven to ten weeks of gestation. Mama skunks typically have four to six kittens or kits per litter. The little stinkers are equipped with scent glands from the get-go, but in my personal experience — which is more extensive than you would probably imagine — young skunks don’t spray unless very agitated.  Kits will hang around with mom all summer long. Around September, they leave her and look for territory of their own thus beginning the second period of high skunk mortality on Arkansas highways.
Skunks are omnivorous, which means they eat anything they can find. Their diet includes small animals like mice, frogs, crayfish, insects, lizards, birds, and bird eggs. They also eat various fruits, table scraps, and any pet food that Fido or Kitty leave behind.
Not many predators can get past the smell in order to enjoy a meal of skunk. The top skunk killers are birds of prey, particularly great horned owls. Most birds have a weak sense of smell rendering the slow moving skunk an easy target when an owl or hawk gets a bead on them.
Once a skunk empties it’s scent glands it can take seven to ten days for the glands to fill up again and during this time the skunk is effectively out of ammo and defenseless. Because of this, skunks don’t want to spray unless they absolutely must. Stink is used as a last resort, and skunks give all kinds of warning before they point the barrel and pull the trigger so if you get sprayed it’s probably your own fault.
The air may reek and the road may be bloody, but we must persevere; it means we are that much closer to spring.