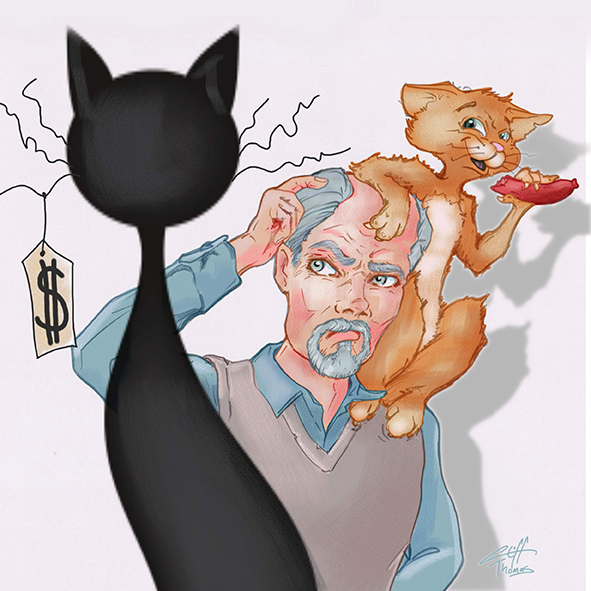 I saw a metal sculpture of a cat once. When I see a metal sculpture I wonder what it would bring in cash at a scrap metal recycling center. I guess I am uncultured. Our homestead will never have a cat sculpture. Unfortunately, it has more than our share of cats. They are always reproducing. They don’t just have one baby, like our horses and cattle. They have multiple births and that may be why many cultures eat cats. We do not.
Susan, my wife, is allergic to cats, but she did appreciate the fact that our barn had no mice. The allergies won out, however, so I tried to give the cats away. The market was saturated, as it always is, when one is trying to get rid of strays. So whenever I sold anything the buyer had to take at least one cat. If you bought a dozen fresh Rhode Island red eggs, you got a free cat — any color, any size, any age, just pick one. Please.
I became desperate. I drove to a neighbor’s place about a country mile away. Quietly, I coasted down their dirt driveway. Without a sound I managed to open my truck door and release some cats. They ran directly toward that house with the porch light as their beacon. Yes! I was so happy, mission accomplished! Unfortunately, I wasn’t home five minutes and the phone rang. It was Shirla, the neighbor. “Otis, did you drop off some cats at our house?” Long pause, but I couldn’t lie. “Yes, that was me. Sorry, I’ll be over to get them back.”
We had acquired so many strays that I was convinced families drove up on the mountain just to let their cats out. I can hear them now, “Billy, here’s a nice little farm to let our cat live his life. They’ve got chickens, horses, ducks, geese and a cow for fresh milk.”
I decided to get on our party line phone and try to give away some cats. When we bought our mountain homestead and had the phone hooked up we were told there was no choice. We had to have a party line. No private service on Linker Mountain at that time; it was just too rural. As a child, I grew up watching Hee Haw, and I remember Jr. Samples on a party line saying, “BR 549.” That image was imbedded in my brain. But being a former city dude, I thought a party line might mean having disco or country background music on your calls or maybe give us an update on which still has moonshine ready. A party line was a good thing. I was elated! I was wrong. It means that everyone within several miles of that telephone pole has the same phone line. Your neighbor could pick up and listen to your conversations so you really needed to be careful with what was said.
But the party line did not help our cat infestation. I had to look elsewhere for a solution. Dale, a good friend I had met at work, had a primitive homestead north of Dover. After asking and pleading I finally offered Dale cash if he would take some cats. Dale took the offer but only after I agreed to deliver. So Joseph, our youngest son, helped me catch some of the strays. We used leather gloves because some had never been handled and, of course, they had no rabies shots.
Another neighbor, Harold, sort of gave us a hand with the cat catching. He was always feeding the strays left over hot dogs from a local grocery. I had asked him many times not to feed our animals, but he would always stick his hand to his ear and act like he couldn’t hear me. Harold would throw the hot dogs over the hog wire fence so all the cats would stay on our property. He gave them expired hot dogs with that red dye. I figured the dye would kill them all, but I guess all it did was make them more fertile and slow, too. The cats were easy to catch with bellies full of hot dogs, and we put several in a large cardboard box and carefully loaded the box into the front seat between Joseph and myself. Dale had told me not to let the cats look out the window because they would find their way back to our home. I had heard of cats being lost on vacation and walking across several states to get back home so I figured maybe Dale was right. I told Joseph to keep their heads down and not let them look out of the box. We drove some pretty winding roads on our way to Dale’s. All of a sudden, this awful smell filled the truck cab. Joseph peeked into the box to check on the strays. “Dad,“ he yells, “ugh! That cat is barfing red!” I guess the hot dogs were good for something else. After partial cat digestion you could use them to clear a room.
We delivered those cats to Dale, but our truck never smelled the same after that fateful day. I did, though, finally achieve my goal — no more strays.