Tougher and a Tiny Bit Braver 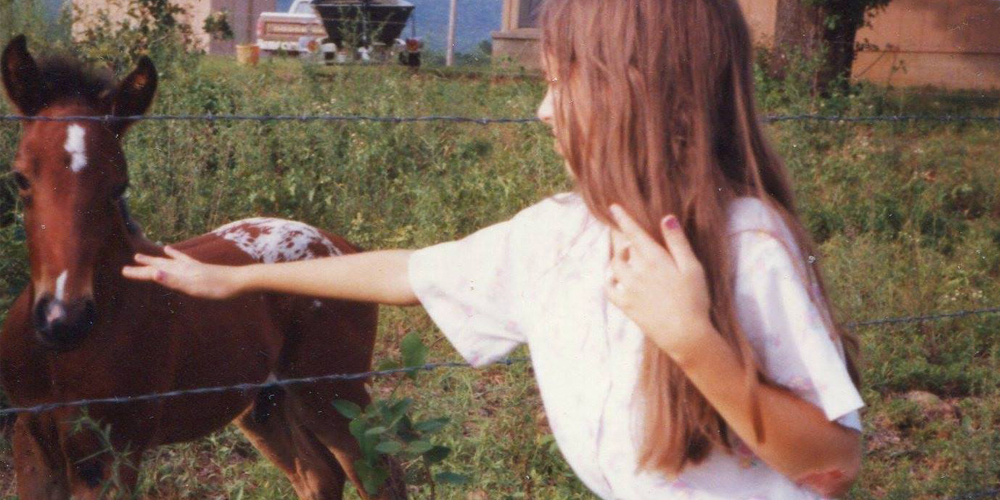 My father recently gave me an envelope full of my mother’s old photos. Inside I discovered an image of a twelve-year-old me reaching out to pet our recently born colt. I’m wearing wranglers, an embossed leather belt, and my long hair hangs down the length of my back. In the background sits heavily wooded Spring Mountain; in the corner of the frame, the neighbors clothes are hanging out to dry.  Surprisingly, I am wearing short sleeves, a rare occurrence even in the warm months.
My short sleeves exposed large patches of psoriasis, a skin disease I’ve had for years. I was already going into remission by the time the photo was taken. The patches are relatively small and only cover a small portion of my arm. For years there were scales all down my leg and from my elbow to the middle of my forearm. I tried all kinds of cream, sat under sun lamps, applied a medicated tape I had to wear for days at a time and eventually took cortisone shots, something that is considered too dangerous today. But the patches only grew. Bright red and scaly, they would peel and crack. I wasn’t supposed to pick at them, but I could never resist.  Sometimes they hurt, itched and bled. But mostly the discomfort was emotional.
Miraculously, by the time I was around 13 — around the same time I was diagnosed with scoliosis and given a back brace — the psoriasis was almost gone. This may have been the result of the treatments or just good luck. The severity of auto-immune disease is known to come and go. By then I had learned a lot about how cruel people can be when your body doesn’t fit their expectations. I can still hear the voice of the young girl who refused to sit by me at the Dardanelle Rodeo. She called me gross and began to run away, grabbing her friend’s hand and pulling her along, telling her that if she touched me her arms would turn scabby and bloody, too. By the time I was fitted for that back brace I was a little tougher, a tiny bit braver. And I had learned to quickly recognize the people who asked questions about my body with a kind and accepting curiosity.
My mother was always taking photos of our family, something that drove me crazy back then. I usually made quite an effort to hide my arms from the camera.  I even developed a pose for family shots where I’d fold my arms in toward my chest, an awkward look to say the least.  For whatever reason, my guard was down that day. Or maybe I didn’t even realize she had the camera.
I still have occasional flareups with psoriasis, but mostly it’s turned into psoriatic arthritis, another autoimmune disease that effects adults who had severe psoriasis as a child. It does cause me some discomfort, but thankfully I am able to keep it under control with a healthy diet and lifestyle. And it’s not a visible disease like my psoriasis, unless you count the subtle ways it’s reshaping a few of my fingers. Every so often when I play guitar my fingers swell and turn red. I sometimes wonder if my hands will eventually curl in the way my grandfather’s, a man greatly disabled by rheumatoid arthritis, did.
Nearly 26 years later, I’m a distinctly different person then the timid girl in the photo. My mother is dead; those boxes of photos are where I have to go to hear her stories. I’ve traveled, I’ve started a family, I’ve faced more fears than I care to count, and I’ve come back home in more ways than one. And now I look at my arms reaching out to that colt and I think those patches look beautiful. The red is fiery and shiny. The white, pale skin around the red fades into my summer tan.  I don’t have any regrets over the sadness and shame I used to feel, nor do I feel like I wasted my time worrying.  I learned a lot about myself in those moments. And I certainly don’t regret what I learned about people and the limits of acceptance. All of us are so affected by mainstreams ideas of beauty. It takes bravery to reject this mask.
After staring at the photo for sometime, I decided to share it with my sons. I told them about the psoriasis, the cruelty of some of my peers, and the kindness of others. I told them how my mother almost never sounded fierce except when she made it clear to me that I was never, ever to be cruel to anyone, to shame or make fun of them. She had no tolerance for human cruelty — whether I was receiving it or dishing it out.
They had a lot of questions about my arms, and wanted to see the subtle scars that can still be seen near my elbow. They were particularly intrigued by my telling of the repeated needle pricks from the cortisone shots and how my mother called me brave as I sat still during the whole procedure.
I owe a lot to that girl in that photo. I can see a latent fierceness there, and all these years later I might be starting to uncover it. While I do remember how sad I was back then, I don’t want to go back to console my fears or take away those patches. I want to bring that young girl with me into the present, show her how to channel her anger and would-be shame into a different way of being — to  bring those experiences into everything I am and pass them down through the coming generations.