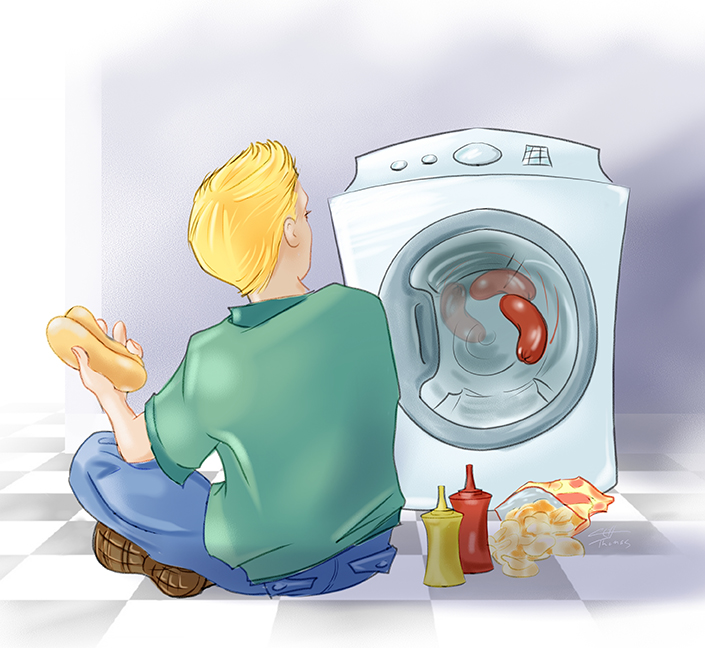 As children get older, they often gain independence and strong will. Some children, however, are just born with an innate sense of needing to do everything themselves. My son is one such child. He is fiercely independent and delights in conquering “grownup” tasks.
Aside from wanting to use real tools (read: taking apart bookshelves and anything else with visible screws to sneakily unscrew) and asking Santa Claus for items such as a chainsaw (for him to cut down trees with of course), my son also enjoys cooking. He loves to concoct “delicacies” for his family and is strongly opposed to asking for help when making snacks for himself.
One evening, he was getting quite animated while playing with his toys and decided he was going to go into a different room to play. He often does this as he doesn’t like to feel as if he is being observed while he assumes a variety of characters during his playtime.
After a few minutes, I got up and checked on him and he was still engrossed in his toys. I got back into my recliner and after a few moments of rare quiet time was fast asleep.
I awoke in a sleepy panic some moments later unsure of how long I had been napping. I checked the clock and was pretty sure I had been snoozing only about 30 minutes. Not even long enough for the dryer to finish its cycle. I eased back into the recliner and let the post-waking tension ease away.
Wait…. The dryer? Why is it on? I thought to myself.  Did I put clothes in the dryer? No… I was pretty sure I didn’t.
I got up and started walking towards the laundry room. Halfway there, I smelled something cooking. I darted into the kitchen to find it completely empty. I was so puzzled and thought I was in a sleep induced stupor until the sound of the running dryer put me back on the trail of the mystery smell.
I rounded the corner into the laundry room to find my son standing in front of the dryer, facing away from me. The dryer was indeed on and he was staring eerily at it.
“Raff, you’re kinda freaking me out. What are you doing?” He looked up at me and casually said, “Cooking my hot dog.”
Cooking his hot dog? Then it hit me.
“WHAT?” I scrambled to get the dryer door open, and sure enough, there it was, being flipped and flopped inside the dryer’s drum. It finally came to rest on one of the dryer’s fins and I reached in to fetch it. The heat from the dryer combined with the cooked wiener smell was quite overwhelming. After rescuing it from the appliance, I examined Raff’s snack. It was nicely toasted and looked as if it had fared well despite being tumbled on high for who knows how long.
I looked at my son incredulously. I told myself to stay calm but I felt my eyes widen and my nostrils flare.
“Why did you put the hot dog in the dryer?” I demanded.
Raff looked at me like he had no idea why I was upset and plucked the hot dog from my fingers. He took a big bite, chewed it, then calmly said, “Because I wanted a snack.”
“Raff! Why didn’t you come get me and ask me to get you a hot dog? You could have caught the whole house on fire by trying to cook something in the dryer!” (I didn’t know if that was actually a fire hazard, but I had never anticipated having this conversation with my child.)
“But it didn’t catch on fire, and it cooked it good! See?” He held out his half eaten prize that was, surprisingly, “cooked good.”
“But you could have so don’t let me ever catch you trying to cook food in the dryer again!” Never in my life did I imagine those words coming out of my mouth.
Raff looked at me with disdain. “You said I can’t use the microwave or the oven, and now I can’t use the dryer either? That’s not fair!” He stomped off to his room with the rest of his hot dog in hand. I just stared at the ceiling and wondered how I was ever going to get him raised. And then I thought, if the oven and microwave ever break at the same time… there’s always the dryer.