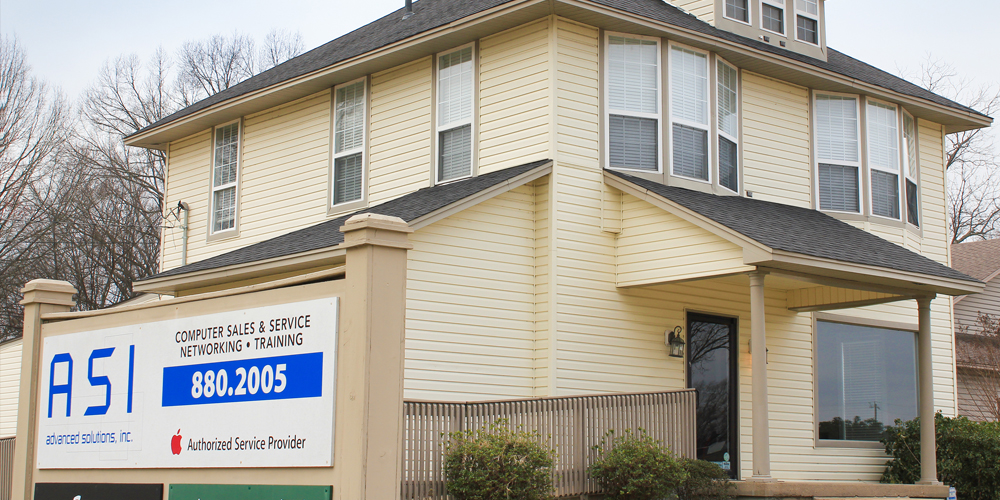 Nestled in the first story of a yellow house on 4th Street in Russellville is Advanced Solutions Incorporated, also known as ASI. The dual computer networking and accounting company has been servicing the River Valley since 1999 and only shows signs of growth. Spearheaded by Willy Wijaya, president, and Monty Kasselman, founder and CFO, ASI works with servers, work stations — you name it.
“We do server and network administration,” Wijaya said. “It’s for anyone who has a company big enough to have a network but not big enough to have in-house IT staff,” Kasselman finished for him.
Those companies include many industries like construction, manufacturing, retail, municipalities and home businesses.
What started as a two-man team working from their homes turned into a five-man staff complete with three on-call technicians servicing all of Russellville and parts of Clarksville. “We’re not quite Steve Jobs or Bill Gates,” Wijaya said with a laugh. “But we worked out of our homes.”
While the Jobs and Gates partnership didn’t prove to be as successful as their solo ventures, Wijaya’s and Kasselman’s doesn’t show signs of failing.
Wijaya and Kasselman became a dynamic duo after they solidified a working business relationship at another company, and they have been friends and business partners ever since. Monty did the accounting while Willy did the systems and network maintenance. “We had a complimentary skill set and a good working relationship prior,” Kasselman said. “It was a symbiotic relationship that formed out of working together.”
After almost 10 years of working together from their own homes, Wijaya and Kasselman moved into their 4th Street office and began offering more individual-friendly services.
The storefront, which was bought in 2007, allowed ASI to invite the Russellville community into their world for on-site computer servicing and Apple maintenance. Even if your product is out of warranty, ASI can provide part replacement and repairs, a service that would otherwise cost you an hour drive to Little Rock. “We have access to original manufacturer’s parts,” said Kasselman. They also have access to almost all their client’s networks via remote access.“We can remote into a server, work station, laptop or whatever and resolve their problem,” Kasselman said.
Now almost 20 years into knowing each other, the duo has brought on three more technicians and is looking to gain momentum and open a satellite office. No matter how big ASI gets to be, though, their business mission won’t change. “If we were in the client’s shoes, we would want help from A to Z,” Wijaya said. From educating their customer about the service and product they are looking to buy, to on-site training on how to work the product after implementation, Wijaya and Kasselman are there every step of the way. “That’s what sets us apart,” Wijaya said. “We have the experience and background.” As do their personnel — with four staff members of ASI holding degrees in information technology, almost every one of them being from Arkansas Tech University. “Our company has the experience and education to help businesses in Russellville,” Wijaya said.
The Russellville residents are here to stay both in the business and in the River Valley. “My philosophy,” Kasselman said, “is we’re here because it’s community oriented and out of all those other places we can take advantage of, we can come back home.” Kasselman met his wife here, and both he and Wijaya have begun families here. Their commitment to the community has made it clear they’re not a “one-time deal.”
“We’re men of integrity, and men of faith,” Kasselman said. Wijaya finished for him. “We’re confident we have the capability to handle any business networking needs.”