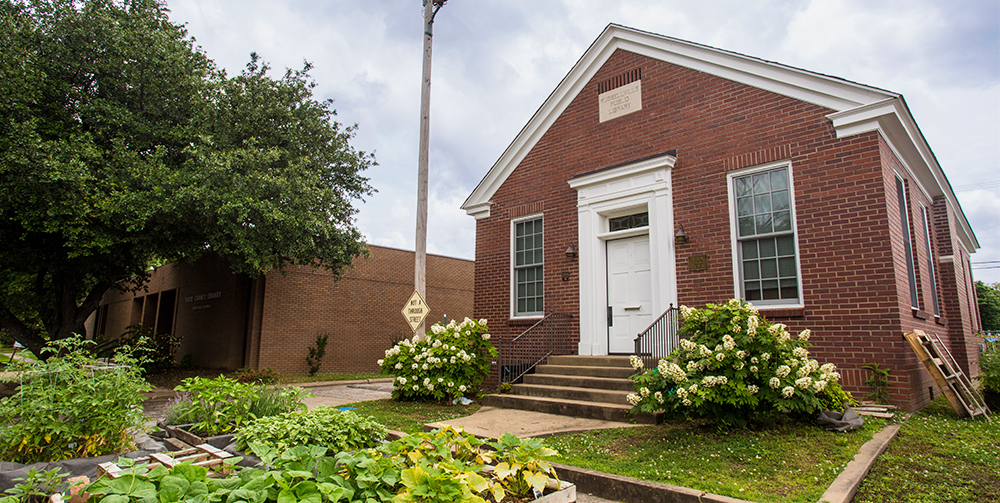 The unmistakable smell of books fills the Russellville branch and main office of the Pope County Library System. It’s the scent that you expect to meet after passing through the glass doors. It’s the scent of knowledge and creativity condensed. This knowledge and creative genius is free to us, and its dissemination is arguably the most important responsibility of a library. The River Valley has had this plethora of information available and accessible for nearly 80 years.
In 1936 the federal Works Progress Administration agreed to build a public library in Russellville, Arkansas. The agreement was contingent on land being available and that land was made available through a generous donation from the children of Mrs. Sue Munday Deaton. The property would remain a gift to the county as long as it was used as a library. Total cost of the building was $7,000.00 with $1,151.00 spent on furniture and the Russellville branch of the Pope County Library System formally opened in October 1937 with Mrs. Lucille Hickman as the first paid librarian. This first building, now known as Heritage Hall, served as the library until 1976 when the present building was constructed adjacent to it and in 1989 the Donald E. Harkey Addition was opened. Recent remodeling of the library includes new carpet throughout, a new ceiling in most of the library, and new paint with help from the Russellville Junior Auxiliary in refurbishing the children’s and young adult areas. The property was deeded to the Pope County Library System in 2000.
The creation of that first library in Russellville was an act of community will. The second library building was a continuation of that community will according to current Pope County Library System Director Shawn Piece. “The previous library board had raised funds for it and then the children of the area donated pennies to purchase the 86,000 bricks in the building.” It was a concerted effort that highlighted the best of what Russellville could do while working together. “At that point we didn’t have a millage. There was, I think they called it a community chest or something, there was some funding but we weren’t even into that,” said Shawn.
Much has changed in those 80 years since the first Russellville Library, and much has changed in even the 40 years since the new library building was constructed. The Pope County population has doubled its 1976 numbers and library usage has grown in parallel. Shawn says it’s time for the library building to grow again. “The library should be four and half times the size it is,” said Shawn, “which means 1,000 square feet bigger than the Tech Library.” This level of growth is a part of the forward-thinking plan for the next 20 years. Despite claims that the library is obsolete in a post-internet world where the corporate name “Google” can be used in verb form as a synonym for research, library usage continues to grow.
“We’ve gone from 287 programs in 2012 and now we’re over 1,000, and 386 of those programs happening in the Russellville location. The remainder took place on the other three libraries in the system.”
It’s not just programs that are seeing high usage, it’s also the traditional services of disseminating information through print and digital publications. “It’s just a balancing,” said Shawn. “The adult fiction went down, I think, 15 percent over the last few years, well our ebooks have gone up. It’s like when everything was in microfilm form and… well people haven’t quit using microfilm because it’s permanent.” Library usage numbers are in fact quite staggering (see accompanying graphs). “It’s between 350 – 700 people per day,” said Shawn. “That’s 110,000 people per year. That’s half the population of Pope County. They come in for everything.”
Despite that wonderful smell of the published word, the library is more than just books, It’s also more than microfilm and computers and internet access. The library provides services that enrich and benefit the individual as well as the community such as: The Bookmobile, adult reading programs, teen reading programs, genealogy groups, writer workshops, books for the sight impaired, wi-fi for the public and the list goes on. All of this is accomplished with a small staff and 20-something regular volunteers, and all of this is accomplished in the face of budget cuts.
Throughout the conversation with Shawn, one theme resurfaced repeatedly: The cost-to-benefit ratio, what the library receives from the community versus what they give, is tilted heavily in favor of the community. The projected cost of a new and adequate library building is $19 million. The Pope County Library System Foundation — an organization founded solely for the procuring private funding for the library — currently holds $179,000. Of that amount, $170,000 was donated by one source.
“Every time they’ve done a library, whether it was this one [Shawn thinks the current library building cost $40,000] the community has said ‘oh my gosh, this is such an incredible amount of money,” said Shawn. “And it is. But when this building was built, and the Dover Library was built, it was all hands on deck.” What Shawn means it that it was a community effort with services and donations provided for nothing more than satisfying a sense of duty and maybe your name engraved on a plate. “There’s a group from the Dover First Baptist Church, they put the library in the dry,” said Shawn. “We’ve got pictures of the judge up there sweating and helping them. Every time they say ‘well this is so much’ but then the community starts helping.”
The time to help is now.
“There is money in this town. There are people that want a new library,” said Shawn. “But they need to let us do it.”
And that leads us to the complicated ordeal regarding two lots setting adjacent to the current Russellville Library building, the subject of this story’s accompanying editorial and a source of months-long debate. The value of our library, however, is not up for debate.
For information about all the services and programs offered by the Pope County Library System, go the their website www.popelibrary.org.l