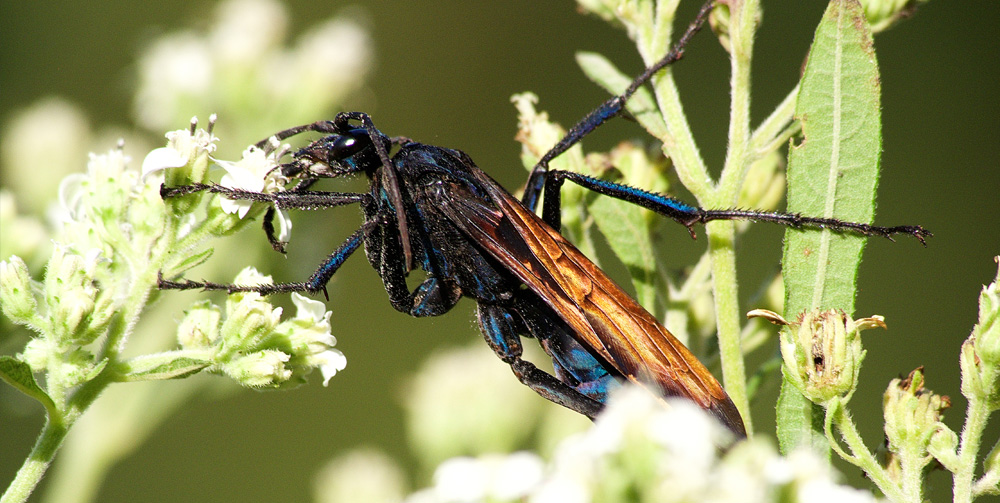 Something dark and heavy was picking its way through the frostweed blooms. The copper colored wings and curled antennae added beauty as well as menace to its form. It placidly fed on nectar along with one of its cousins, a thread-waisted wasp. The thread-waisted wasp was dwarfed. This burly midnight-blue beast was easily as long and nearly as thick as my thumb. It was a tarantula hawk, the largest species of wasp in Arkansas.
As their name implies, tarantula hawks kill tarantulas. When a female tarantula hawk has mated, it starts hunting for tarantulas by smell. Sometimes she locates a tarantula burrow and tugs at the sensitive silk strands surrounding the den, imitating prey to draw out the spider. Sometimes the female tarantula hawk goes on an airborne hunt, searching for a tarantula in the wrong place at the wrong time.
When the tarantula hawk finds a big hairy spider, it wrestles it until it can administer a single sting and inject a potent venom. The tarantula is paralyzed almost instantly. But tarantula hawks don’t eat tarantulas, not as adults anyway. No, the tarantula hawk drags the spider back to a burrow and lays a single egg on the tarantula. When the egg hatches the larvae begins eating on the still living tarantula starting with its nonessential tissue — so the tarantula won’t die and the flesh dry out — and finishing up on the vital organs after about 30 days.
Ghoulish lil’ critters, ain’t they?
This reproductive cycle was actually a big part of the inspiration behind the monster in the movie “Alien.”
After consuming the tarantula, the larva pupates (just like a caterpillar making a cocoon) and emerges as an adult wasp. Then, the cycle starts all over.
Adult tarantula hawks eat sweet stuff like nectar, which explains why the one I found here is all over the frostweed. They enjoy fruit as well and have been known to become “flying-impaired” after consuming fermented fruit.
This giant wasp is found anywhere that tarantulas are found. Entomologists think their range is mostly west of the Mississippi River with Missouri as the northern boundary. They are common in the desert southwest states.
Tarantula hawks grow to about two inches in length and are built pretty stout, an adaptation due to regular spider wrestling. The males have straight antennae and the females are curled. They are a truly beautiful insect, with metallic blue or green bodies and wings that vary from copper to mahogany. This type of eye-catching coloration is known as aposematic. It’s a signal to potential predators that this animal can hurt you. Many venomous yet non-aggressive animals such as coral snakes and poison arrow frogs are aposematic.
While the tarantula hawk’s sting isn’t considered lethal to humans, it is rated as the most painful sting of any insect in North America. Entomologist Justin Schmidt, who subjected himself to insects stings in the name of science (and possibly masochistic tendencies) described the pain as “immediate, excruciating pain that simply shuts down one’s ability to do anything, except perhaps scream. Mental discipline simply does not work in these situations.”
The tarantula hawk’s sting is rated as a “4” on the Schmidt Sting Pain Index. The index ranges from 1 to 4 and a “4” is described by Schmidt as “blinding, fierce, shockingly electric. A running hair drier has been dropped into your bubble bath.”
Fortunately, tarantula hawks are not aggressive. As long as you enjoy their beauty from a distance you should be safe.