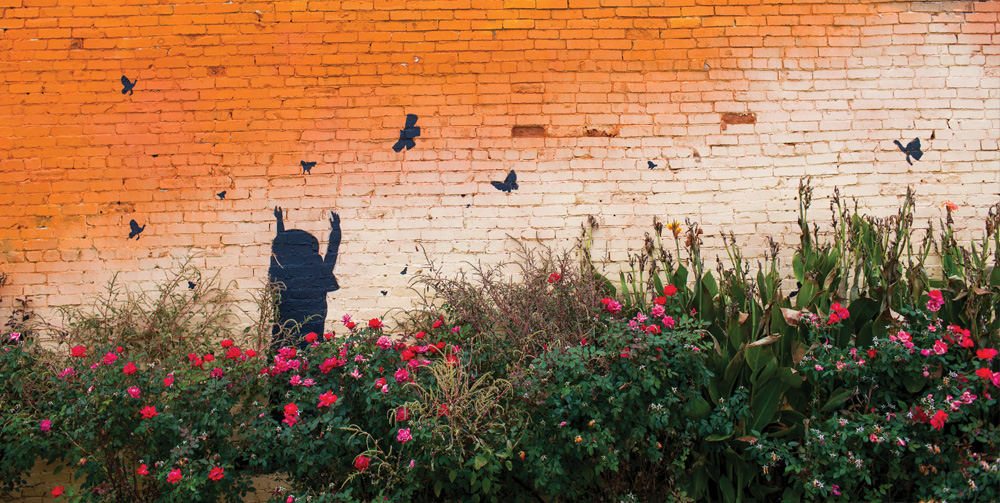 Today, Paris, Arkansas claims 3,495 residents and is home to the Butterfly Festival, a replica of the Eiffel Tower, and the old Paris hospital. Some events, like Frontier Days, pay homage to the roots of the community that reach back to 1871 when what is now Logan County was carved out of the surrounding counties and originally named Sarber County after a well-known carpetbagger. But when Democrats retook the state legislature, renaming the county and extinguishing the legacy of reformation in the entire state was on top of the agenda. Sarber County became Logan County in 1875.
From there came man-made lakes, community buildings and eventually the railroad. Business was booming with the combination of the railroad and the coal mines that brought, and kept, people in the city. Paris, though, saw drastic change when it began evolving. The coal industry bottomed out and buildings today have turned into museums instead of the busy places and industries they used to be.
Curtis Varnell, a Paris native, has dedicated a portion of his life to chronicling the town, its history and to honor his own Paris roots. “As a child, my uncle William Varnell would tell me stories about his explorations, old caves, Civil War hideouts, old home places and tales of the people that preceded us,” Curtis said. “I have since located many of those locations and researched the history.”
Varnell’s love of history went on well past his childhood. As an adult, Varnell decided to stay in Paris after graduating from Arkansas Tech University. He taught science and history at the high school, drove a school bus and announced ball games. “Kind of a jack of all trades, as most people are in small schools,” Varnell said.
In his down time, Varnell narrowed down Paris history to some distinct time periods that the city saw profound change. The first, 1874, was the founding of the city. “At first named Maryville, after a young settler that lived in the region, it was discovered that Arkansas already had a town by that name so it was changed to Paris, in honor of the French capitol,” Varnell said.
A naming after the French capital city, though, seemed a bit odd for the original Scots-Irish settlers of the day. Most of the original settlers actually migrated from Tennessee and North Carolina, Varnell said. “It was like you picked up a whole town and moved it from Tennessee to here.” But one of the county commissioners greatly admired Paris, France for it’s technological advancements around the turn of the 20th century and the citizenry agreed with this choice.
The second monumental shift happened with the discovery of coal in the region. Up until that turn, settlers were farmers producing for themselves, their growing families and a small but growing market. A lot of the agriculture was plantation farming, mostly cotton and corn, along the Arkansas River. Paris soon became an  agricultural center for cotton and corn. But historical documents note residents were beginning to find coal deposits in 1865. The discovery of coal fueled the city’s boom in the early 1920s. Coal was key to most economic growth seen in western Arkansas. As the economy grew, the need for expanded and improved infrastructure grew as well. Lakes, roads and bridges, Varnell said, were “a result of the Civilian Conservation Corp and the Works Progress Administration.”
Coal was transported west by train and cities began popping up around the railroad tracks. Commerce and jobs also picked up. Timber, another resource ubiquitous to the region, created the rail road ties and other products that were shipped to cites like St. Louis. But when the coal dried up, people left almost as quickly as they came. “There was no money crop in this area,” Varnell said, at least on a comparable economic scale with coal. And what agriculture remained soon fell under heavy weight of improved farming techniques in other regions of the country.
By the 1950s, cotton production had shifted to Texas as a result irrigation technology developed. A lot of natives now became migrants like many citizens in the Dust Bowl Days. Migrants like Varnell’s parents would move to California and Arizona for work and return to Paris when they had saved up the money to ride out the winter. “This is where their roots are,” Varnell said.
Eventually, home became a getaway for settlers as they made their way up Mount Magazine and businesses soon followed. Traveling playwrights and small productions would perform on the ledge to crowds that gathered at three hotels on the Mountain. The beginnings of the tourism industry also attracted the wealthy, but access to other areas via train and more developed modes of transportation led to a decline in early tourism around 1925.
Some settlers, though, returned, thus giving birth to the sleepy town that Paris is today. Varnell equated it almost to a retirement community comprised of just over 3,000 people. Many of the younger generation, he said, have moved on to bigger cities to pursue jobs achievable to them largely due to the education they received from Paris schools. State wide, Varnell said, Arkansas sees a larger population of teachers and nurses that started their education through the Paris school system. Current citizens often work in larger cities like Fort Smith, making the commute   just to return to the rural area that affords them peace.
Varnell himself is one of only 13 classmates that decided to stay in Paris. Many of his other 100 or so classmates took work out of state.
The community’s growth, though, isn’t something Chamber of Commerce Director Tonya Baumgartner is worried about.  The attractions like Mount Magazine and the ever-popular Christmas lights bring in visitors from all over the state, and keep Paris on the map. And it’s because of these events, Baumgartner said, Paris will continue to steadily grow and be a “gateway to Mount Magazine” for many years to come.