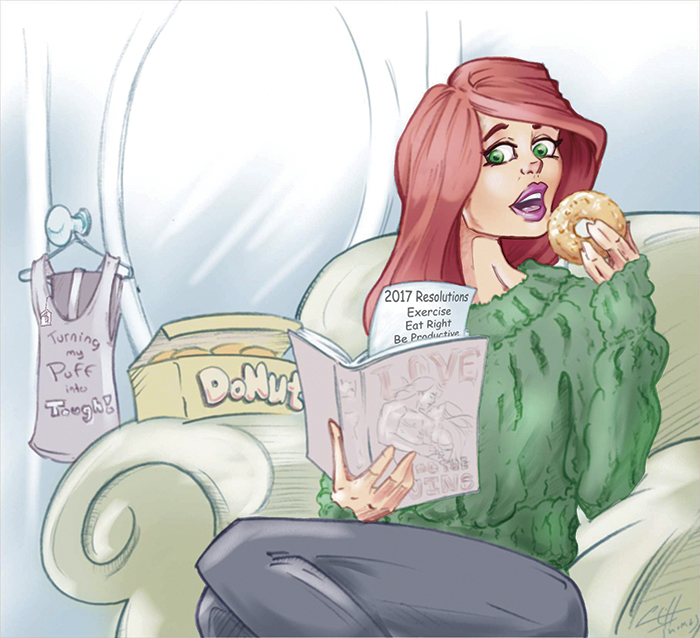 I’m an optimist. And as an optimist, I always look forward to having a clean slate, a do-over, a chance to begin again. All of these come once a year on January 1. I look forward to this date for weeks, pondering my resolutions, in search of the best “me.”
This year was no different. Most of my resolutions revolved around organization, accomplishing unfinished tasks, taking time for new experiences, eating better and exercising more. Basically, my resolutions are all over the place. There’s room for improvement in all areas of our lives, right?
January 1 came and, since it was a Sunday, it consisted of the usual Sunday doings — church, lunch with family, cleaning the salon, getting caught up on laundry, and preparing for the week ahead.
January 2, being a Monday, seemed a much better day to begin new practices and habits. However, Monday proved to be full and chaotic — getting back into the routine of the mundane, getting up early, getting my son to school on time, and doing all of my regular Monday things. Tuesday seemed a much better day for all things “new.”
Several days later, I concluded that the first week after Christmas vacation was just hard. It was hard to get up early because of sporadic scheduling over the holidays. It was hard to button my pants because of all the delicious holiday snacking. It was hard to remember to put on a bra because I left my house as seldom as possible over the holidays and who wears a bra at home? And it was hard to get organized when I still had so much holiday clutter congregating on every surface in my home. Not to mention how hard it was to develop the urge to eat healthier.
Alas, mid January came and I decided enough was enough. I could only wear leggings and baggy sweaters so many days a week, olives and cheese only constituted a meal in the month of December, and everything in my life needed a good organizing and decluttering. The list of resolutions was lacking even a single check mark. I had accomplished nothing.
As a goal oriented and efficient person, the thought of any list lacking check marks was gnawing at my psyche. I just couldn’t handle it. I decided to take a day off from work to stage my own intervention. I had to get my life together.
My day of productivity started by getting up an hour earlier than usual with the intention of making a healthy breakfast for my son and myself. However, once downstairs I just stood in front of my refrigerator in my bathrobe. As I stared at the sad menagerie of its contents, I remembered I had forgotten to go to the grocery store.
But I would not be discouraged! I was able to put a check by the “get up earlier” resolution and  the “be more intentional with your mornings/stop rushing” resolution as I decided to take Raff to Cracker Barrel. He was elated to go somewhere for breakfast instead of having to scarf down oatmeal or eggs while I rushed us out the door.
After dropping him off at school, it was go time. Time to make some checks on my list.
First things first: the gym.
I realized I wasn’t dressed for the gym, so a quick trip to purchase gym attire (and several other items) made me realize I wasn’t adhering to my “buy less/make do with what you have” resolution. And since I eat my feelings, only a quick trip through the Shipley’s Donuts drive-thru for a snack would help. I rationalized this by telling myself I had to have energy for the gym. I couldn’t possibly burn calories on an empty stomach.
After my snack, I drove straight to the gym. I was feeling confident in my new work out garb until I realized I had dropped chocolate cream filling from my donut all over the seat of my car and had somehow managed to smear it all over the back of my purple spandex pants. I was definitely not working out with brown smudges on my pants. Feeling very disappointed, I cheered myself up with a very healthy smoothie from Tropical Smoothie Cafe. Anything is healthy if you put kale in it, right?
I was exhausted. I had worked myself into a frazzle trying to be productive. I drove myself home, my smoothie straw never leaving my mouth. Thoroughly exasperated over the events of the day, a nap was definitely needed. Changing out of my over-priced, chocolate-smeared spandex and into leggings and a baggy sweater, I curled up on the couch with a cozy blanket and an overly dramatic romance novel.
Right before I nodded off into nap time, I remembered my resolutions list and mentally checked off “make more time for yourself” and “read more.” With four of my resolutions gaining a check, I decided it was still a productive day. And as an optimist, and with four being my lucky number, this was definitely going to be a great year.