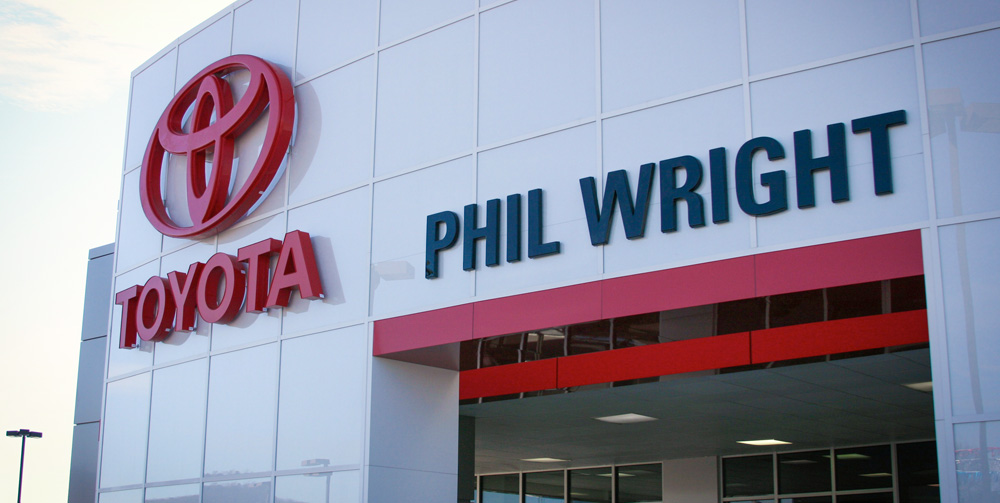 Phil Wright Autoplex started out in 1975 when Phil Wright bought the Gosnell Chevrolet/Buick dealership in Russellville. He added Toyota around 1993 and brought along the rest of the General Motors family of cars just a few years later.
The Phil Wright Autoplex today is home to 200-250 inventoried vehicles from Toyota and all current GM brands except Cadillac. The business employs 52 people. “We’ve really grown in the last couple years,” says Danny Hipps, general sales manager at Phil Wright Autoplex. Danny says that most of the growth has been in the service department. “We’re trying to speed up on getting customers in and out. We’ve got a few more mechanics and a few more people in the service drive to better accommodate customers.”
There is a distinct and comfortable hometown business vibe at Phil Wright. This is to be expected after more than 40 years in business. But it’s also attributable to long-term employees. “A lot of our employees have been here 30-plus years. We really try to take care of our employees, which translates into taking care of your customers.” This means that customers can expect to see a familiar and helpful face each time they return for service work or a new purchase. “Butch (Booher) has been here for 38 years,” says Danny, “Dusqua (Moore) has been here for 35 years, Russ (Wright) has been here for 30 years. People know who they’re going to see when they walk in the door.” Danny himself has been at Phil Wright Autoplex for 25 years. There’s another list of employees with decades-long employment in the service department as well. “We’ve got a lot of mechanics with 19 or 20 years of working here,” says Danny. And even employees that leave often come back. “A lot of people that leave, you know, you think the grass is greener, and then they come back when they realize how good it was here.”
This level of caring within the business is also how Phil Wright Autoplex feels about the River Valley. It’s evident in their “Player of the Game” awarded weekly to an area high school football player and in their monetary support of local charities and nonprofits. “We really try to do business with hometown values,” says Danny. “People need support, donations and such, in the community and we try to help them as much as we can. We try to support local efforts. We support the local community. And we enjoy what we do.”
Danny says that he hopes the local community appreciates Phil Wright Autoplex. “We can’t sell to everybody,  but we sure wish everybody would give us the opportunity.” Danny says that many people would be surprised to find out that they can buy what they want and get a good deal by shopping local. “We don’t have the inventory that other dealers do, but we’ve got access to more inventory. We can get what you’re looking for and we can get it here in 24-48 hours. Give us the opportunity, that’s what we’d really like folks to know.”