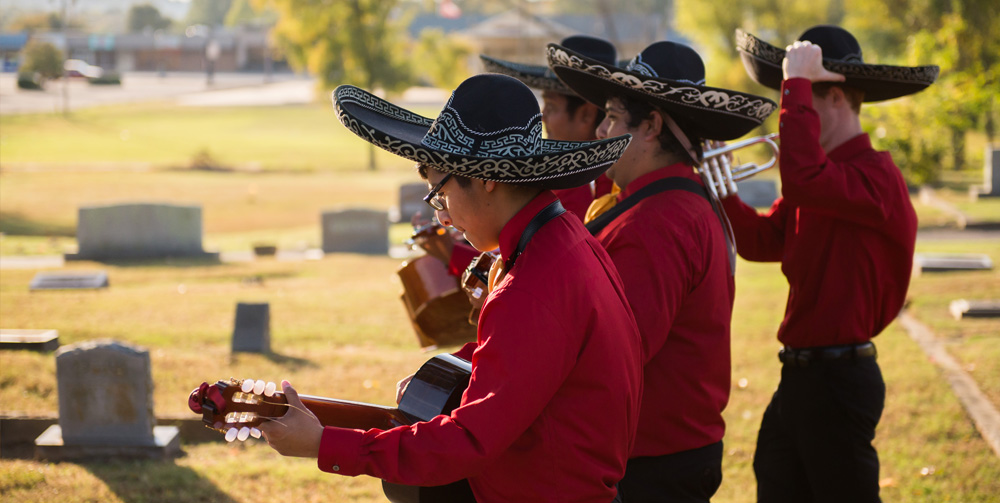 Every year beginning on October 31 and ending on November 2, millions of people around the world celebrate the Days of The Dead, or Días de los Muertos. It’s primarily a Mexican holiday, although it is now celebrated in most latin countries and areas with large hispanic populations. It has been a long held belief that once a year starting on October 31 at midnight, the heavens open up, allowing the deceased spirits to intermingle with their loved ones for 24 hours. Traditional activities include sharing meals with the deceased, decorating and cleaning gravesites, parades, and festivals.
Many of those who grew up isolated from Mexican culture consider the day to be just a “Mexican Halloween” of sorts, but this couldn’t be farther from the truth. While Halloween and Días de los Muertos have similar origins, their modern interpretations are very different.
The tradition of Días de los Muertos dates back 3,000 years, to the Aztec civilization in present-day Mexico. The Mesoamerican cultures and people there had a strong belief in the afterlife, understanding that life and death were closely intertwined. They considered life to be a dream. Only upon death would you come fully awake. After death you would continue to live in one of the thirteen overworlds, layers of heaven, or in one of the nine underworlds. Because of this belief, the early Mesoamericans had very little fear of death.
Unlike many other cultures, which layer you belonged in was dependent entirely on your cause of death, not your actions while alive. For instance, drowning victims lived in a layer ruled by the rain deity. Warriors who died were brought to the realm of the sun deity. Human sacrifices were thought to live on in the highest level of heaven with the creators. Their deaths were the god’s way of choosing them for service.
Each of the layers of the underworld and overworld were linked to the world of the living. Those same drowned ancestors would help bring rain, and the warriors would help the sun transit the sky. Everyone was expected to work in the afterlife as they kept the living world running behind the scenes. In this way, the lines between life and death were blurred. While onlookers may see the painted faces, skulls, and fancy dress as morbid, the tradition is really a celebration of life. It’s a day when life and death are at their closest, and death is just part of a broader cycle of life.
In Mexico, it was, and still is, tradition to keep the deceased close to your heart.  On the Days of the Dead, families and friends will visit gravesites and often bring the deceased favorite foods. They’ll have a picnic right there as a way of sharing the meal. Parades throughout the cities celebrate death as a part of life with dancers dressed as spirits and live music. Altars, or ofrendas, are constructed by family to help guide souls on their journey back to earth. These altars are decorated beautifully with bright flowers and a special kind of bread called pan de muerto that is said to provide souls with the sustenance they need.
Originally, Días de los Muertos was celebrated at the end of summer in the ninth month of the Aztec calendar, and the celebration lasted the entire month. Through time, and a Spanish invasion, the holiday became a three-day event. Catholic traditions like All-Hallows Eve, All-Saints Day, and All-Souls day merged with the native traditions and the result was a mixed celebration of the dead. Lore has it that on October 31, the heavens are opened up. November 1 is the time that the children and those who died young are given the chance to visit with family. On November 2 adult spirits are allowed to come back and mingle.
Russellville is now poised to celebrate its second Días de los Muertos on October 28, as a close to the Downtown Fall Festival. Events will include dancing, music, a latinx art show, and grave talks at the Oakland Cemetery. These festivities are put on by a nonprofit called the Traveling Arts Fiesta, founded by Jeannie Fowler Rodriguez-Stone, McElroy House Organization for Community Resources, and the Oakland Cemetery.
Jeannie’s goal is to bring people together. As a young Puerto Rican immigrant to Arkansas in the 1960s, she found it difficult to meet other hispanic folks or be accepted into southern culture. “In 1964, it was hard to be an other,” she says. “The treatment of immigrants I experienced didn’t jive with the southern practice of extending hospitality and neighborliness.” Now that the area has had a big increase in the hispanic population, Jeannie is trying to build a landscape that is more conducive to integrating other cultures.
The celebration will begin with a fine art show featuring some of Arkansas’s best latinx artists and an Arkansas Tech professor will give a lecture about her home country of Chile. Later, a local mariachi band will play and dancers will perform to traditional music. Finally, at 4:30, a procession led by the dancers, Chinelos Morelenses Unidos en Arkansas, will make its way to the Oakland Cemetery. Once there, Jeannie will lead a grave tour complete with historic reenactments honoring our dead and honoring the spirit of Días de los Muertos. She will tell stories, recite interesting facts, and help people get to know their ancestors.
All in all, this year’s Day of the Dead celebration is sure to be a diverse and exciting event for our diverse community.
Traveling Arts Fiesta will be accepting donations to benefit Arkansas United Community Coalition, which is working on behalf of DACA recipients.