Where chicken nuggets come from 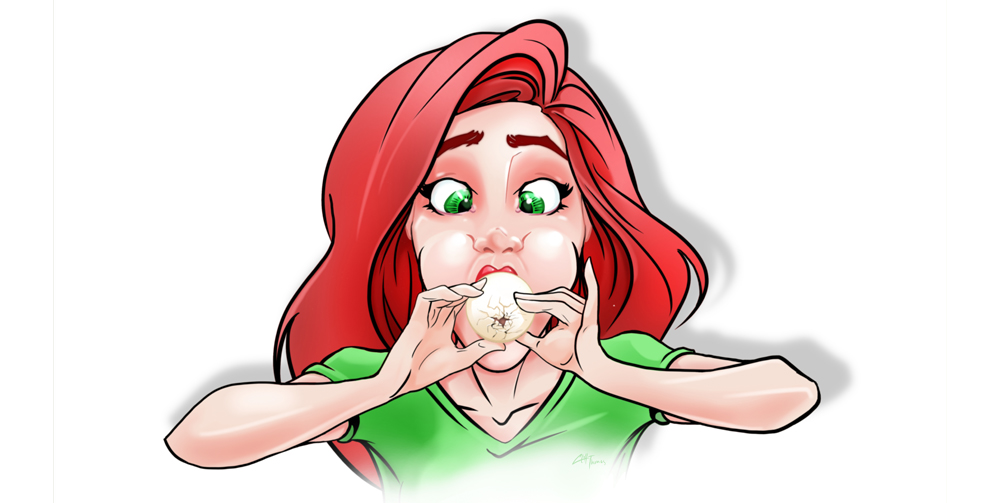 Every year, on the night before Easter, my family gets together for a fun night of egg blowing. If you’re unfamiliar with this activity, you’re really missing out.
The whole point is to hollow out eggs so that you can stain the shells using food coloring and vinegar. The eggs can then be used for decorating, or hiding, or as my family does, just for something fun to do.
Depending on the amount of people you have participating, you will probably need a few dozen eggs, a few dozen nails, one bowl per egg blower, and lots of paper towels. If you’re planning on decorating the hollowed eggs, you will need lots of food coloring, vinegar, a large mixing bowl, a pair of tongs, and even more paper towels.
To begin, each egg blower will hold a nail upright on the table, pointy part up. Then, lightly tap one end of the egg on the tip of the nail until the nail goes into the egg. Repeat on the other end. Place a bowl right in front of you, put your mouth on one end of the egg, and blow really hard! Ideally, the contents of your egg will come out of the other end of the egg and into the bowl. Sometimes the bottom part of the shell will shatter due to the air pressure, or other times the egg blower will forget to hold the egg delicately and smoosh the shell out of aggressive blowing. The results are quite comical. There is usually a huge mess involved, lots of sides hurting due to laughter, and a lot of eggs to be used for breakfast, cakes, or other Easter goodies.
Last year, my family gathered at my sister’s house to begin the egg blowing. I stopped at the store on my way to her house to purchase a few dozen eggs, but my sister called to tell me that a coworker had given her several cartons of farm fresh eggs and she needed to use them. So I left the store and headed to her house.
My sister and I have a menagerie of kids between us (note: I only have one. The rest of the zoo belongs to her, as they are definitely her monkeys.) But between all of the kids giggling and egg whites flying to and fro, there is always a huge disaster left behind, so I always start the festivities with a thick covering of paper towels over the table.
And then all the egg blowing commenced. We had only had a couple of blow outs, the rest were highly successful, with our empty egg shells stacking up in an Easter basket on the adjacent countertop.
“Aunt Sarah! It’s your turn!” My niece proclaimed. I stopped my process of egg staining and walked to the egg blowing table.
“I bet I can blow my egg out faster than you can!” My nephew said.
“Challenge accepted!” I said cheerily.
I sat down in a chair at the table and picked up an egg and a nail. Tap tap tap… I made my hole in the bottom. Tap tap tap… then the hole in the top was made. I held the egg tenderly between my fingers and attempted to blow the contents out of the shell. To no avail. I drew in another big breath. And another. Nothing. Not even a single drop of egg whites escaped. I blew harder. Still nothing.
“Ha! Beatcha!” My nephew exclaimed. I looked up at his empty egg shell.
“Ugh.” I said bitterly. “This one is so hard!” I blew again, harder than my previous attempts. Nada.
“I’m giving up on this one, my cheeks are hurting.” I complained.
“Let me try.” My sister said, jumping at the chance to conquer a task I had been unable to; you know, just a healthy sibling rivalry.
After a full minute she gave up as well.
“I think we should just crack it, it can’t be saved anyway because there’s holes in it.”
She cracked the egg and let the contents fall into the egg bowl. Kerplunk! A big chunk of something fell into the bowl and sent whites and yokes flying.
All of us seated at the table peered curiously into the bowl, then recoiled backwards suddenly with our noses snarled in disgust.
“What is that?!” Raff asked, completely grossed out.
My sister Amy and I peered cautiously into the bowl. And there amongst the clear and orange pieces of slime, was a half formed, featherless, veiny creature lying very still in the bowl.
My sister poked it. “I think it’s a chicken.”
“Well what did you expect? It came out of an EGG Amy.” I said sarcastically. She scowled at me.
I realized the kids’ faces were stricken with horror all around the table, so she and I gave a quick rundown of how hens and eggs and roosters all work, and the part they play in an egg being just an egg that we can eat, or becoming a baby chick. Their faces still looked traumatized. Slowly, Raff’s eyebrows unfurrowed and raised high on his forehead.
“Ohhhhh, I see what you’re saying.” He said, suddenly enlightened. “You’re saying that when an egg comes out of the chicken’s butt, it’s an egg like this.” He said pointing to the contents of his egg bowl. “And when the egg comes out of the rooster’s butt, it’s like a chicken nugget!”
“Umm…” my sister started. I put my hand up. “Another time.” I looked at the eager eyes looking up at me. “Who’s ready to paint some Easter eggs?”