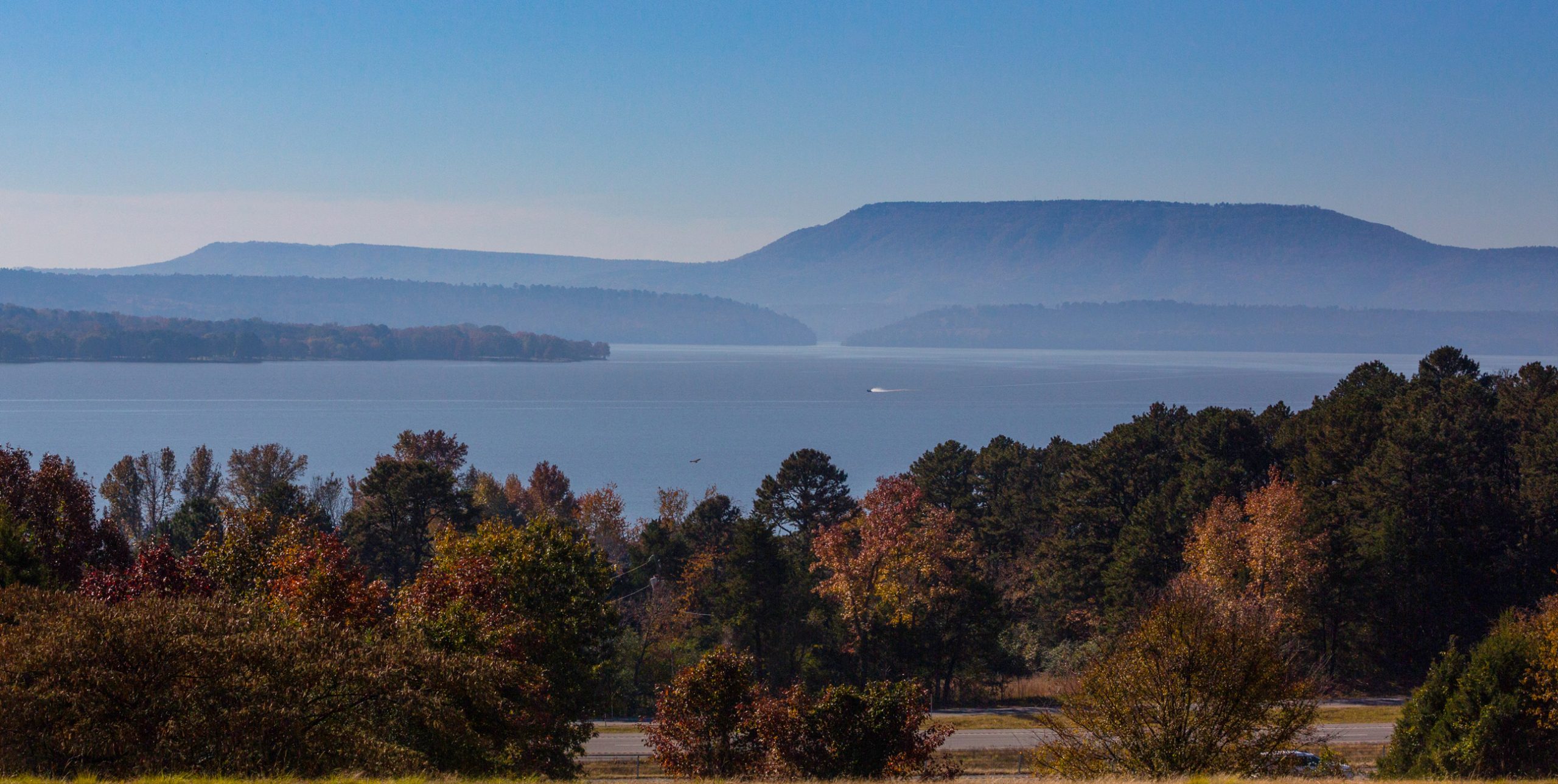 Snuggled between Arkansas’s mountain ranges, touching the Arkansas River and Lake Dardanelle, Russellville offers wonder and intrigue with a unique blend of natural beauty, history, culture, community, and purpose. The region was once an Osage hunting ground, but from the onset of Euro-American settlement the pioneers looked to the future. The tradition of planned progress over time continues in Russellville.

From 1818 until their removal to Indian territory in 1928, the area was a Cherokee reservation. But soon after Native American relocation, Norristown, established in 1829 by Samuel Norris, became a center of trade along the Arkansas River. Norristown was located on what is now known as Skyline Mountain and did not merge with Russellville until 1980.

The area north of Norristown was once called Chactas Prairie, The Prairie or Cactus Flats. It was first settled in 1834 when P. C. Holledger built his log home. He sold the home to Thomas Russell, the region’s first doctor. The Shinn building, the first business in Russellville, was originally a wooden structure built in 1847 by Jacob Shinn and replaced with the current brick building in 1875. It sat at the crossroads of the buffalo trail running north-south to the Arkansas River and the east-west road from Fort Smith to Little Rock. The building still stands and is located at the corner of Main Street and Denver. Russellville and Shinnville were really the only two options put to a vote as citizens decided on an official name for their growing town. Russellville incorporated as a town on June 7, 1870. By 1876, Russellville had 15 stores, two cotton gins, and six doctors.

Railroad tracks spanning the countryside and the black steam engines moving people and goods were a giant step forward for Russellville when the Little Rock and Fort Smith Railroad opened in 1873. Although the town had grown slowly (progress being delayed by the Civil War and, after its official end, the militia wars that followed) the rail line increased trade and transportation. Early industries were agriculture including livestock and cotton, coal mining, and timber. The town was incorporated in 1870 and become the county seat in 1887. A downtown fire in 1906 destroyed 21 businesses which were quickly rebuilt and progress continued. With the help of the railroad and coal mining, the population boomed and steadily increased in size to near 9,000 by 1960.

Bringing larger industry and goods on the Arkansas River required taming its wild nature, and damming the river had been proposed as a goal since the 1920s. Construction on Dardanelle Lock and Dam No. 10 began in 1957. The project was completed and officially opened in 1969 when the first commercial barge went through the lock. While the riverbed was exposed before the dam was built, workers reported that “it looked like the surface of the moon.”

Lock and Dam No 10 is part of the McClellan-Kerr Arkansas Navigation System. It was the largest project undertaken by the Corps of Engineers at the time. Damming the river created the 34,000-acre reservoir now known as Lake Dardanelle. The lakebed had formerly been lowland farms producing cotton, beans, corn, and livestock but the land regularly flooded as the Arkansas River’s path varied with the weather. 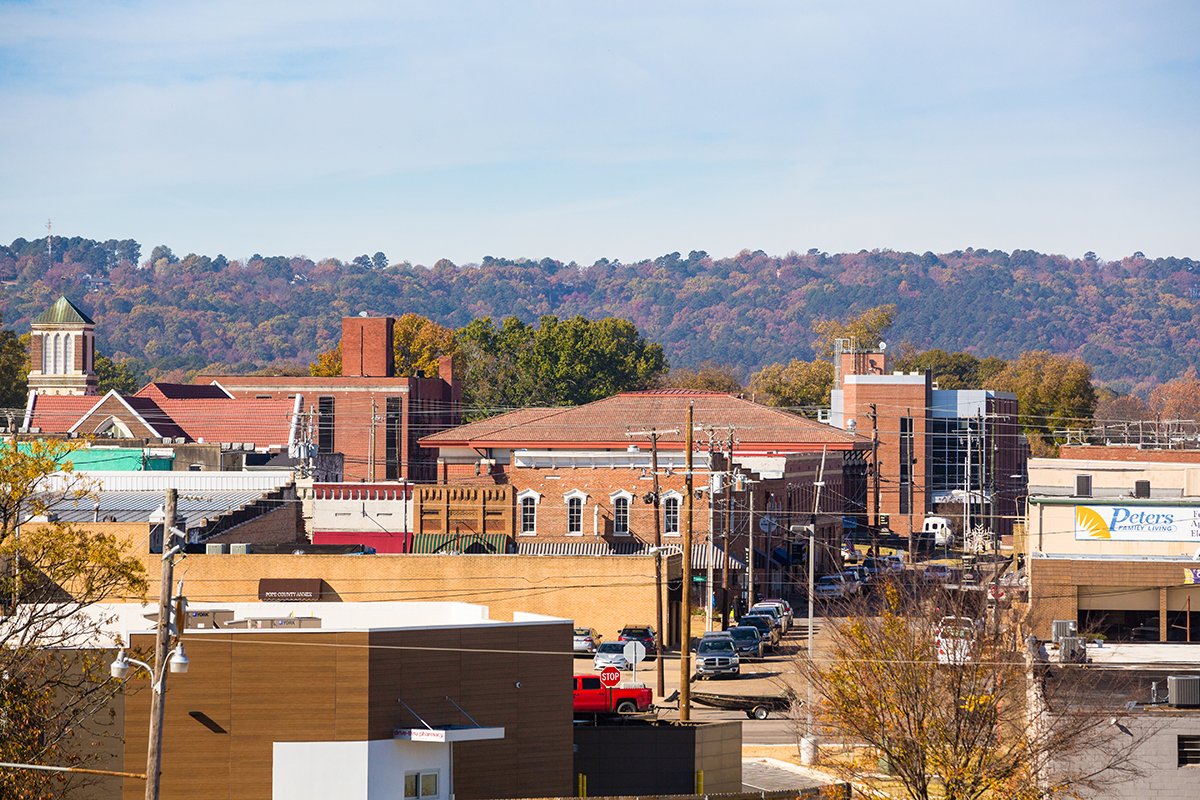 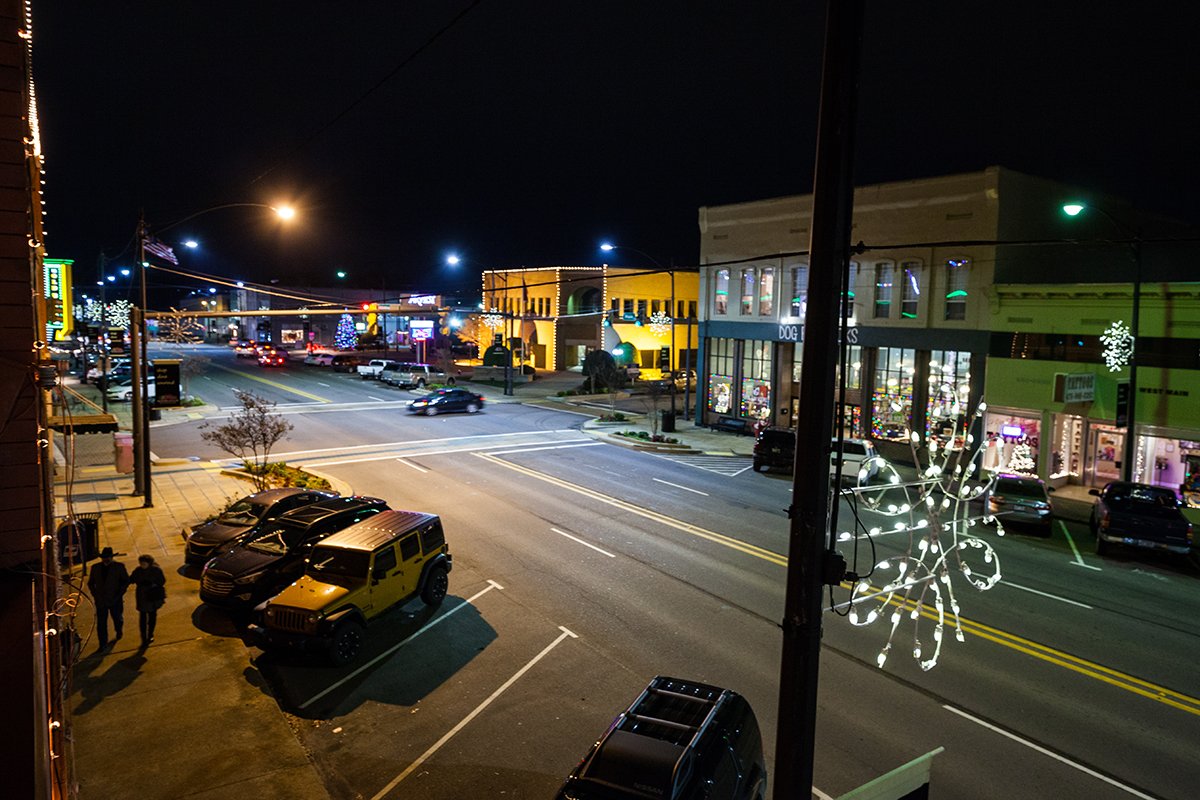 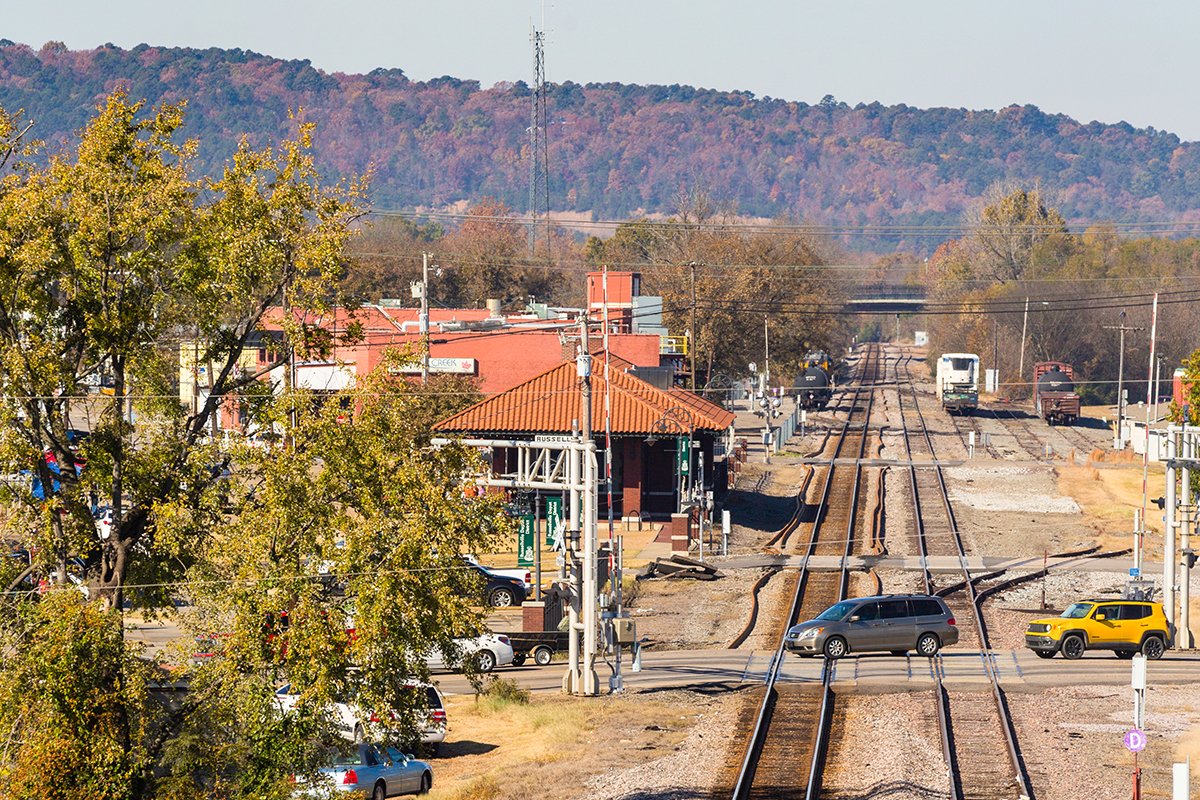 The construction of Interstate 40 in 1956 helped push the population of Russellville to over 11,000 by 1970. Two decades later, Highway 7, which runs north/south through Russellville, was designated as Arkansas’s first scenic byway. Highway 7 has been named one of Car & Driver’s top-ten driving experiences and is listed in USA Today’s 50 state scenic routes. Running 297.27 miles from the Louisiana state line to the Missouri state line, Highway 7 is also the longest state highway in Arkansas. Roads, rail, and river trade brought large, more diverse industry to the area in the forms of frozen food, railroad ties, aluminum foil, graphite electrodes, and aircraft and automotive parts.

In the past four decades, Fortune 500 companies have provided new industry and jobs to Russellville, helping the population grow to 27,920 according to the 2010 census. Tyson Foods, Firestone, ConAgra, International Paper, and Dow Chemical, all employ thousands of residents.

Russellville’s first school was established in the 1800s as Dwight Mission, a school for the Cherokee Indians. Private and subscription schools were taught for several months per year by qualified teachers and by 1876 twelve grades were offered. In 1909, The Second District Agricultural School was established which offered classes for a high school degree. Later it offered the first two years of college and the name was changed to Arkansas Polytechnic College. It became Arkansas Tech University in 1976 and is the third largest university in Arkansas today. There are currently 11 public and two private schools in Russellville.

Outdoor recreation is popular in Russellville with fishing in Lake Dardanelle a favorite pastime. Local bass tournaments are regular weekend events during spring and summer while pro tournament circuits like Bassmaster and Cabela’s often feature a stop on Lake Dardanelle. Revenue generated for area business for a two- to four- day bass tournament can be hundreds of thousands of dollars according to Russellville Mayor Randy Horton. “Visitors spend money at gas stations, hotels, and restaurants,” says Horton. “So we try to have a couple (tournaments) each year. The advertising and promotion commission work really hard at improving and attracting bigger tournaments.”

Downtown Russellville is the hub of the community and offers a pleasing mix of historical buildings and businesses next to entrepreneurial enterprises just starting their story. The city center has changed its look through efforts of the Main Street Russellville organization and volunteers in the community. “Years of diligence, seeing projects through and working with people who work really hard has paid off,” says Jami Mullen, executive director of Main Street Russellville. “With the additions of Fat Daddy’s and The Old Bank Sports Grill, we turned a corner — it brought vibrancy back. People eat at these restaurants and come out and see a cute boutique and they stop in and buy something or maybe go to one of the art galleries or the arcade. Just one thing after another and it builds our downtown. It’s thriving.” Retail businesses thinking of moving downtown can visit the Main Street Russellville office located in The Depot for help coordinating with building owners and other free services.

Depot Park and Amphitheater greet visitors in downtown as they enjoy art walks, the annual Taste of the Valley, a farmer’s market, the RussVegas Half Marathon, Music Downtown @ Sundown, the annual Fall Fest and Chili Cook-off, and then wrap up the year with a Winter Wonderland light display. The original depot was constructed in 1880. A new depot was built and completed in 1917 by the Missouri-Pacific Railroad and the last passenger train left Russellville in 1960. When the Missouri-Pacific Railroad merged with Union-Pacific in 1980 they donated the depot to the city of Russellville. It was renovated over a multi-year project and rededicated in 2004 at the Reunion ‘Round the Rails. The Depot is listed on the National Registry of Historic Places. With a railroad museum, community room, and playroom for children, The Depot is a destination in itself. Downtown visitors can also eat inside a real train car at Stoby’s restaurant just across the tracks from The Depot.

The community is dedicated to local commerce, and new business owners in Russellville can contact Arkansas Tech University’s Small Business Association for guidance. This free service provides small business outlines to guide owners through processes such as licensing, permits and contacts. It also provides promotion through campus media. Sydney Halford, owner of Gifts on Parkway, opened her business in April 2018. She said that working with ATU was a “wonderful experience and I would recommend it for anyone considering having a small business.”

Modern aspects in the city are e-scooters, food trucks, and loft living. “I think it’s great, says Suzanne Alford-Hodges, a downtown business owner and resident. “Anything that brings diverse people, younger, older, out-of-town, other religions and countries are good. I absolutely love it.”

According to Mayor Horton, the future of Russellville looks bright as progress continues in the downtown areas and across the city. “The Prairie Creek Improvement Project is being planned to widen and clean the creek,” says Horton. “And then we hope to add a permanent structure for the farmers market, and possibly a food truck Friday. We’re also hoping to link all the trails, and we have a committee working on adding new trails. We’ll be working on infrastructure, like the project on “O” Street where we widened the road and added multimodal lanes, sidewalks, and lights.” Russellville’s goals are best summed up as centered around a better life for its citizens “Overall prosperity,” says Horton,”and opportunities for families to be able to enjoy all of the great things the area has to offer.”