Out there in the dark 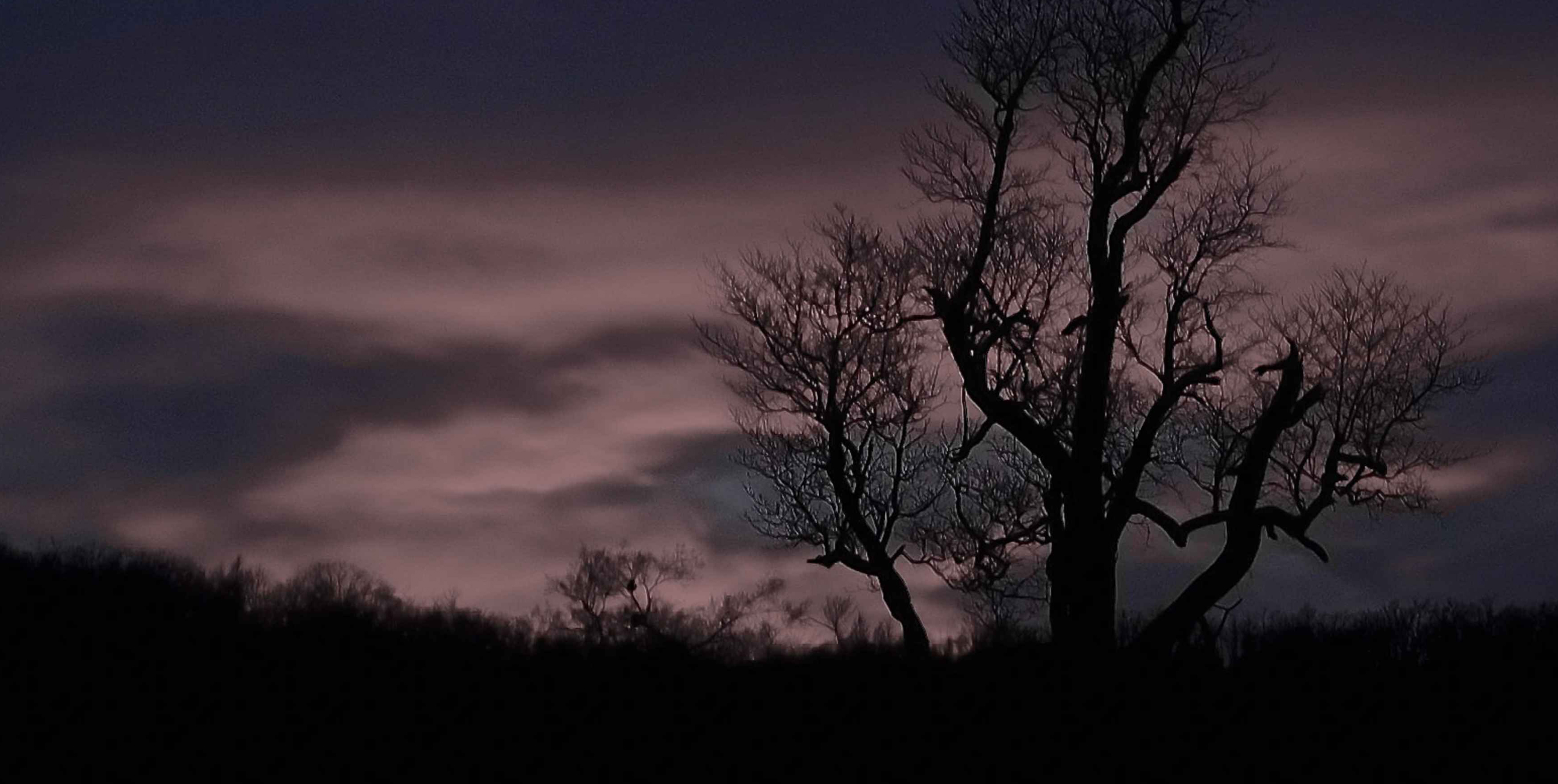 It’s about 15 minutes before graying of the eastern horizon, and I’m sitting in a tree overlooking the head of a steep draw. Everything for the hunt is in place here, 25 feet up a pine. All the shuffling and adjusting is over and I turn the light off. A tiny shudder tremors up my spine in the blackness. But it ain’t because I’m cold.

As my eyes adjust from the red beam of the headlamp, weak light from a waning crescent moon bathes the ridge and hollow in dimly silver light. Substance and shadow are difficult to distinguish. And it is dead quiet. The brittle silence is abruptly cracked wide by a barred owl—howling and hooting like a demon monkey, Satan’s henchman giddy to pluck a hapless soul from this realm—just a few trees over. I know the sound, I’ve heard it countless times, but still I’m jolted bolt upright. It’s a vestigial impulse from not that long ago, the remnants of razor-sharp awareness honed every minute of every day by the knowledge that bloody death could be lurking in the shadows.

As the knot in my gut unravels, I feel stupid for letting such a familiar sound unnerve me. But instinctively, I think of the compound bow with arrow nocked hanging within arm’s reach from a hook screwed into the tree. A weapon so close at hand and loaded, so to speak, offers a subtle bump to my comfort level.

Getting to the treestand through dark woods is far more perilous than sitting in the treestand. I’m a long way from the road and have zero phone signal. Downed trees pose a real hazard. A trip over a log in the dark could easily blow out my “good” knee, the one with two nylon screws to keep my ligaments in place. I could stumble into the creek, frigid on this December morning, which could quickly lead to a bout with hypothermia. Tumbling off a 30-foot bluff here in the hills would surely be bad news, and I know a couple folks that have nearly gouged their eyeballs out on naked and sinister low-hanging limbs.

Those concerns flit through my mind, but the worry net never catches them and likely the owl wouldn’t have bothered me on the walk in, either. It’s because I had that little red light strapped to my noggin, illuminating the forest at least five steps ahead, and I reckon five steps is enough prophecy to keep my faith intact. But once secured in the tree and ready to hunt, when the light clicks off, the shadows close in. Pleistocene memories rush back into my 21st century head. Under cold moonlight a mile or more back into the forest, I’m just a hairless ape. And I’m all alone. No matter what my modern rational mind says, my primitive survivalist mind knows better. It’s been here before, through generations of hunter/gatherers, through cave bears and leopards, wolves and lions. My primitive mind knows I’m at a serious disadvantage. My primitive mind knows I’m at the mercy of the darkness. Or rather, whatever is hidden in the darkness.

Nyctophobia is the clinical name for fear of the dark. I don’t suffer from it, and you probably don’t either. I’m not scared of the dark, but I am sometimes concerned with what may be out there beyond the reach of light. The forests I roam in Arkansas are mostly sterile landscapes, though, a huffing black bear or even a coarse-barking gray fox can make you think otherwise. But whenever I’m far from the hum of civilization, from the soothing warm glow of electricity and its virtual flames, something in my primate mind reaches back to the days before our command of fire and light. Back to the days when what you could not see would be precisely what killed you. Psychology has a name for this type of recall. It’s called genetic memory.

As the name implies, genetic memories cover a range larger than just fears. Perhaps the best examples are found in the animal kingdom. Monarch butterflies, for example, fly a 2,500-mile journey to the specific small area of forest in Mexico their ancestors left the previous spring. How do they know the way? Humans have their own version of this phenomenon, and Swiss psychiatrist Carl Jung had a broad theory under which this type of memory fit. He called it the collective unconscious.

Jung’s theory hinged on various archetypes that triggered responses in human behavior. According to Jung, archetypes influence a wide array of characteristics that make us human. For example, who can sit around a campfire with its mesmerizing flickers of light and not feel a sense of connection to those sitting with you? Why does that smell of woodsmoke produce a deep sense of comfort in most people? But also included in the collective unconscious are our fears. Jung writes: “The archetype concept derives from the often repeated observation that myths and universal literature stories contain well defined themes which appear every time and everywhere.”

Universal human fears of the natural world tend to follow some logical tenants. Snakes, spiders and scorpions elicit a skin-crawling, often irrational fear. Interestingly, spiders and snakes bother me nary a whit. The size difference alone would seem to make some of these potentially deadly animals relatively easy to deal with. But that smallness is precisely what makes them so creepy to so many folks — they are expert at wiggling into tight spaces, penetrating homes and shelters, and probably elicited screams and thrashing arms from our earliest ancestors just as they do to us today. These were the dangers that threatened us even as we enjoyed some sense of security and prepared for sleep.

Then there were the more violent archetypes of death, those with wicked canines, shredding claws and eyes glowing fierce with predatory desire in flickering flames of the fire keeping them at bay. These beasts were the inspiration for myth and legend. They are the reason adrenaline spurts into our system with an unexplained rustling in the dark. This is why that owl got me. It’s why the mumbling growls of what I think was a bobcat stabbed an icy shiv of fear clear to my bones while hiking back to the truck — lightless — after I’d out walked daylight on the creek one afternoon. This reaction is simply an unnerving visit back to a time when we were prey. It wasn’t that long ago, and our DNA remembers.

No, I’m not scared of the dark. Actually, I enjoy the blue velvet quiet of a frosty winter’s night more than most. But I also feel a lot more comfortable when I can, when I want to, see what’s out there in the gloom. If you feel the same, know that it’s normal. There’s no shame and you’re not a coward. It’s a natural feeling for a species that only in the last few thousand years of its evolution hasn’t worried much about what’s out there in the dark.