Have squirrel, will travel 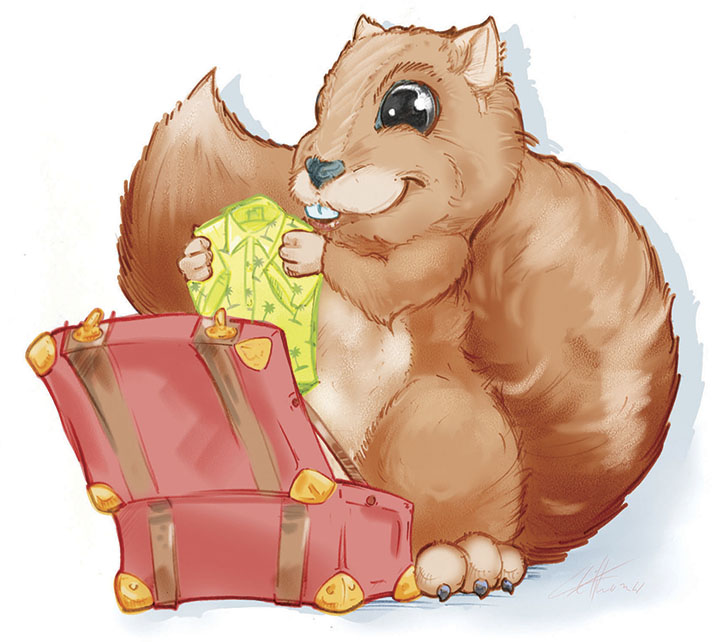 Those who know me well, know that I love to travel. Anywhere. Everywhere. I love exploring small towns in Arkansas, big cities all around the world, and everywhere in between.
But often, my travel adventures include dealing with flights and airports and all of the inconveniences that can arise from them. I have experienced longer than expected layovers and running down airport corridors in a frenzied panic to make the flight on time. Flying can be extremely advantageous for time management, but also extremely inconvenient if the travel plans go awry.
A few weeks ago, my son and I traveled to Portland, Oregon, for an end-of-summer trip. The city is known for being quite liberal and eccentric, and thoroughly lived up to those expectations. So traveling to and from Portland, you’re bound to meet a few interesting characters.
After a fantastic week of visiting with old friends and eating all sorts of delicious food, my son and I were on our way back to Arkansas. We boarded our first flight home from Portland with a layover in Phoenix, Arizona.
Raff and I were seated in the aisle and middle seats, respectively, and a kind woman claimed her seat by the window. She got settled, fastened her seat belt, and carefully placed a small wicker tote in her lap.
Soon, all travelers were accounted for, the seat belt and oxygen mask tutorial had been given, and we are on our way. The woman next to Raff kept her hands tightly clasped over the lid of her basket. The tote had a flap lid fastened by a strip of well-worn leather stretched over a small, tarnished metal hook. As the plane leveled out after take off, the woman’s hands seemed to relax some. She unclasped them but still had them on the lid of her tote.
A few moments later, the flight attendants started rolling carts down the narrow aisle offering drinks and refreshments to each passenger. When she reached our row, she handed Raff and I the beverages we requested and a small package of peanuts and a second of pretzels. The woman next to us told the attendant what she wanted to drink and requested two packages of peanuts, instead of pretzels.
After the cart rolled further down the aisle, I noticed out of the corner of my eye that the woman opened the small bag of peanuts, took one out, opened the flap of the tote, and popped it in.
She continued to do this over the course of the next several minutes until the contents of the first bag of peanuts had all been slipped into the wicker tote. Raff was completely oblivious, even though he was sitting directly beside her. He had downloaded a few movies onto his phone, his ears flanked by headphones.
The woman then opened the second bag of peanuts, and I thought for a split second that I could see something scurry around a bit in the basket. I realized I wasn’t being as discreet as I thought in my basket watching. The woman’s eyes flickered over to mine and she placed her hands on the lid, clasped once more.
I quickly plucked a magazine from the mesh pocket on the back of the seat in front of me and pretended to intently read an article about sea cucumbers. After a few moments, the woman relaxed again and began popping peanuts into her wicker tote once more.
I was baffled by her behavior but had almost resigned myself to thinking she must be saving the nuts for later. But when I turned my head to check on Raff, I saw her lift the flap of her tote again. Two tiny brown hands popped out and quickly grabbed the peanut from between her fingers.
The woman noticed that I had noticed her secret.
She looked at me with scared, round eyes. I realized she was worried that I would alert the flight attendants about her stowaway.
I gave her a gentle smile and a wink, doing my best to convey that her secret was safe, but I was dying to know what was in that tote. She visibly relaxed, smiled back at me, and brought one wrinkled finger up to her mouth as if to say “shhh.” My nod of agreement seemed to seal our arrangement, She opened the tote again, reached in and lifted out a little squirrel. I had been expecting some sort of guinea pig or hamster or some other form of domesticated rodent.
My eyes wide with surprise, the woman glanced quickly at Raff as if to ask whether he would want to see the animal as well. I nudged Raff, and he removed his headphones and looked up at me.
I leaned my head down to whisper in his ear. “Be very quiet because it’s a secret, but look what she has in her basket,” I said. Raff looked over at his neighbor and the tiny animal in her hands.
“Can I pet it?” he whispered to her.
“Yes, of course, her name is Lucy,” she replied.
Lucy was quite tame and never tried to bite or squirm out of her wicker home. After a few minutes of hushed gushing over the small stowaway, the captain’s voice came over the intercom instructing us to refasten our seatbelts as we would be landing soon.
Our neighbor gave Lucy a quick kiss on the head, returned her to the inside of the tote and looped the worn leather back over the metal hook.
Raff picked up his headphones again, and started to put them on, but then leaned over to my ear.
“Mom, can we get squirrel?” he asked.
I had anticipated his question and replied with my usual response to all inquiries about pets. “Maybe someday.”
No, we would not be getting a squirrel… although, it would be very cute to carry one around in a little wicker tote.