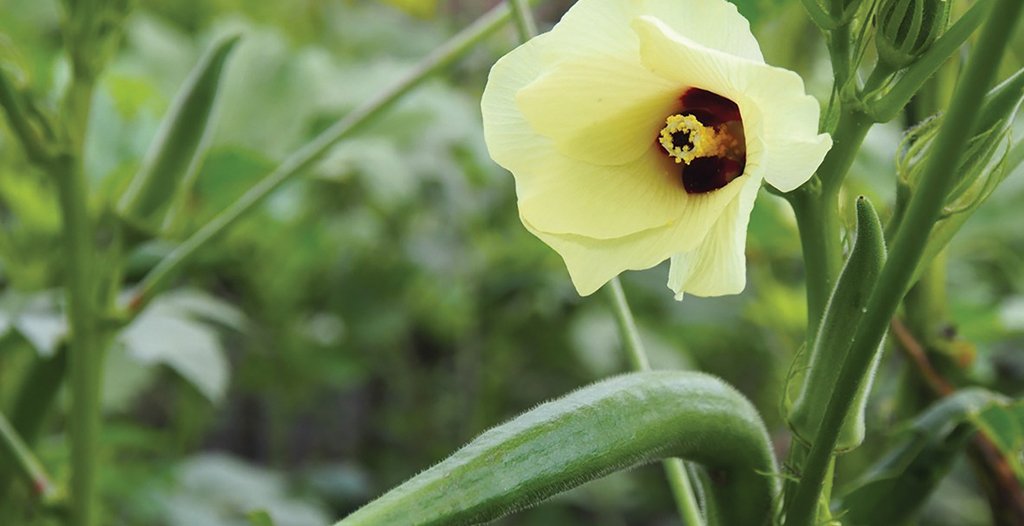 I slipped the blades of my pruners around the stem and squeezed. Tossing the young, tender okra pod into my bucket, I looked forward to eating a “mess” of fried okra at dinner that night. (My mom always called it a “mess” — not sure if that’s a southern term?)

The one “must-have” crop of my garden, okra holds many memories for me. When I was a child, my mom never failed to grow okra in her garden, and she always cooked it fried like any good Southern cook. One year in particular, her plants grew at least seven or eight feet tall. We were in a new house that year and apparently the previous owners spread chicken litter in the garden area. She was so proud of her okra that summer and had me take a rare photo of her in her okra patch.

Thirty years later, I’m proud of my okra, too, but for a different reason. I haven’t had to buy okra seeds — or okra itself — for years. From my earliest garden, I started saving the seeds of the staple Clemson Spineless okra to grow the next season. From a practical standpoint, my family has been eating free okra for a long time.

But seed saving also holds rich history. Dig into the stories behind heirloom plants like Craig LeHoullier’s Cherokee Purple tomato or Melissa K. Norris’s Tar Heel pole bean and you’ll learn there’s more to seed saving than planning for next season. Seeds have stories. Seeds have history. Even okra itself is thought to have come to North America through slave trade ships, where Africans wove the seeds in their hair because the crop was so important to preserve and grow in their future land.

Though my original seed of Clemson Spineless okra did not come from any my mom had saved, I hope I can pass on the seed to my children. In this case, the history of this particular okra in my family starts with me.

Once I began saving a few seed varieties, I started saving more. Over the years, my crops of black-eyed peas, pole beans, and some tomatoes have come from previous years’ crops. Not only is this a fun, economical, and even nostalgic practice, but also — this year more than ever — I feel a necessity for it.

At the time of this writing, many popular seed companies remain sold out of staple varieties. In the spring of 2020, many of these companies had to close to new orders because they couldn’t ship fast enough to meet demand — particularly when having to change their working operation to comply with social-distancing recommendations. As a result, consumers like us who have grown accustomed to procuring seeds, like buying candy at the supermarket check-out lane, found ourselves limited in our options.

To supplement the seeds I saved from last season, thankfully I had bought the seed I needed for 2020 in January. But will I be able to do the same in January 2021? No one knows at this point. That’s why I’m expanding which seeds I’m saving from this year’s harvest and I encourage gardeners to do the same.

The truth is, saving seeds isn’t as complicated as you may think. You just have to keep in mind two important concepts:

Save seed only from open-pollinated (not hybrid) plants.

Save seed only from plants that were unlikely to have cross-pollinated with others in the same species.

Hybrid plants have their purposes, but seed saving isn’t one of them. If you bought a transplant at the nursery this year, find out what variety it is and do an Internet search to find out if it is open-pollinated (often labeled heirloom) or hybrid (often labeled F1).

If you find out that the plant is, in fact, open-pollinated, ensure it hasn’t had the opportunity to cross-pollinate with another plant of the same species. This can get complicated, but for the beginner, here are the plants that are generally safe to save seed from because cross-pollination isn’t as likely:

If you only grow one variety of the following vegetables, you can save seed from them:

Summer Squash OR Zucchini (summer squash and zucchini can cross)

Once you decide which plants to save seed from, you want the fruit to fully ripen. In the case of peppers, for example, they will turn red. Cucumbers will turn yellow or orange. Okra, beans, and peas will turn brown and dry out. From there you can extract the seed and dry them out in a cool area.

In the case of tomatoes and cucumbers, place the seeds in a jar of water and let them sit for a day or two. Skim the scum off the top and fill again. Viable seeds will sink; non-viable ones will float. Take the viable seeds and spread out to dry as you did the others.

Once the seeds are completely dry, save them in a cool and dry location until you’re ready to plant next season.

If you’ve never tried seed saving, this is the year to start. At the very least, you’ll begin your own history and you’ll have your own stories to pass down with plants you grow year after year.

Just think: what if that history started with seeds you saved during the historical year of 2020? Now, that sounds like a story for the seed saving history books. 