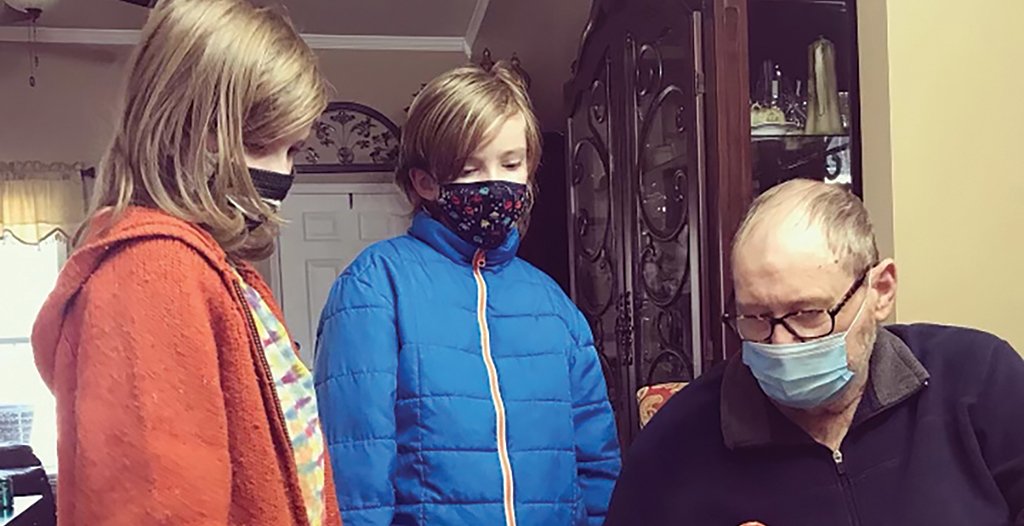 We were recently over at my Dad’s and Thelma’s when Dad got out his old engineering books. The orange leather cover and blue-lined graph paper pages were a familiar sight to me. As a child, they used to be spread out all over the kitchen table along with protractors, rulers, and yellow notebooks my dad used for his “figuring.” In the 1970s and 1980s, my father worked for the Arkansas Highway Department and built roads all throughout the Ozarks, specifically Newton County. As a person who struggled with even basic math, these books always seemed to contain a magical, secret language I couldn’t even begin to wrap my mind around. Decades and three children later, those formulas still look like another language to me.

My dad opened the books to the back pages to show my oldest children the trigonometry formulas they used long before anyone would carry a computer in their back pocket. He talked about how they used to figure the curves and elevation in the roads with nothing more than these books and a pencil and paper. It’s a language I still don’t understand. But I do know what it’s like to take a pattern, a little creativity, and bring something into existence. After all, I’d say that is what all writers and community workers do.

A few columns back I wrote about how I had been digging (literally) into my grandfather’s old garden plot. Over the years, I’ve come to notice that our deepest callings sometimes have a way of skipping a generation or two. My father didn’t dig into this soil in the same way his father did. That’s my work to do. I certainly missed the engineering calling. But my kids hear it loud and clear.

When my oldest were toddlers we lived in Little Rock. Every Tuesday I took them to a “music and movement” gathering for kids at one of the libraries in the city. It so happened that the driveway into the library had a few speed bumps. I remember one afternoon when we were leaving to head back home, my sons — verbal, but without large vocabularies — let me know they wanted to see the speed bump. I thought they just meant to drive over it. So I slowed down and we talked about the fun bump. Then I headed out to the main road. They both broke into intense tears. Do you want to go over it again, I asked? Yes! They said. I turned around; we drove over it again. But still they cried. “See speed bump!” they told me. I realized they didn’t want to drive over the bump. They wanted to touch the bump.

So I parked and held their hands as we went over to what was, to me, just some asphalt. But to them it was a whole world.  They both got down eye-level with the bump and ran their hands over it. They talked to each other about the bump and its ascent and descent. They took their Hot Wheels cars out of their pockets (they never ever went anywhere without cars) and ran them slowly over the speed bump. Before nap that day, they went home and built their own speed bumps for their cars. It kept them busy for hours and even days afterwards.

I remember this moment as one of the most magical of their toddlerhood. I had wanted to say “no” to getting out of the car that morning. I had wanted to just drive home. But I knew deep down that something was going on and they needed to see, touch, and explore that speed bump. It was boring to me, but clearly to them it held something much more.  They were studying it the way I study dirt or seeds. It was full of wonder, possibility, and imagination.

Fast forward to today. Those twin boys are 11 now, and they still think like engineers. They don’t keep Hot Wheels cars in their pockets anymore, but they do build Legos of their own designs. They take rulers and draw out detailed worlds. They build Minecraft creations. They recently built a studio for their own Youtube channel called “Peg Animation” where they have a show called “Wabbits’ Weeact” wherein their rabbits react to things. Those engineering genes may have skipped right past me, but they are alive and well in my own children. And I guess my point here is that I first really noticed this in those moments where they fell in love with a speed bump. I didn’t have to understand their fascination. I just needed to slow down and give them space to be who they were and are becoming.

Lately I have been thinking a lot about what it means to honor our own callings and imaginations, especially the things that seem boring or foreign to others. And I know that part of my own commitment to my family — both the generations before and after me — is knowing that we all have skills and magic we’re inventing and reinventing into reality. 