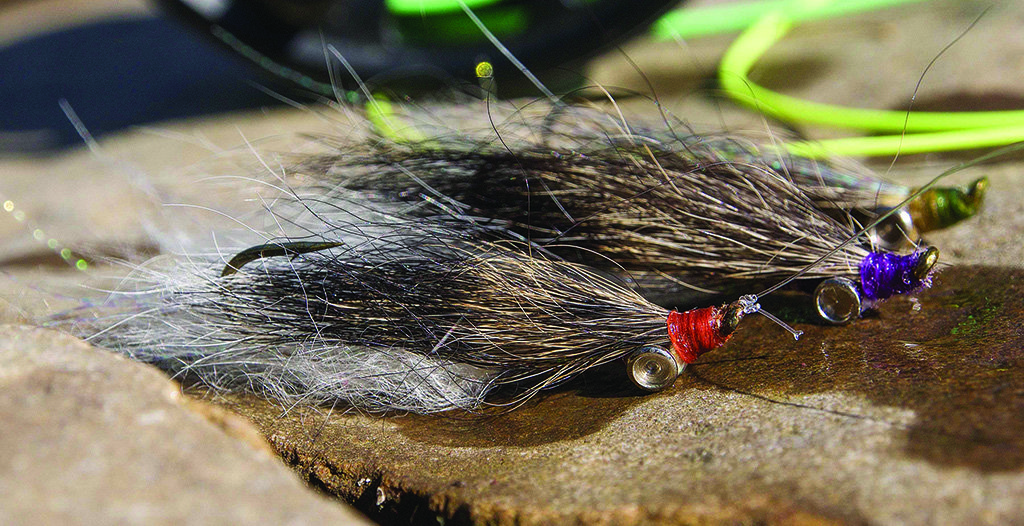 The morning’s hunt in the Ozark National Forest had ended with four fat gray squirrels riding home in my truck. As I cleaned the squirrels, readying them for a simmering pot of potatoes, carrots, onion, celery and a blend of seasonings, the white-tipped fur on each tail caught my eye. It seemed wasteful to throw them away.

An after-dinner whiskey accompanied me to the fly-tying bench, where the squirrel tails rested amid wooden pegs holding a dozen spools of thread and a vise always standing ready for the next project. For me, fly-tying started as a path to more intimacy with the sport, the fish and water, but has since become a pleasant diversion from a sometimes scary world. It’s also made me pay closer attention to subtlety in the mundane. Since I’ve started tying flies, I can’t look at any string, fiber or fur without pondering what it might be able to do while tied to a hook. I wonder about shimmy and wiggle, and if the material would look natural, yet also stand out just a bit. Those white tips stood out to me.

When we think about what colors we assign to animals, we tend to think back to childhood, to crayons and monotones — brown for deer, black for bears. But animal pigmentation isn’t so cut and dried. In reality, it’s a matrix of hues, some earthy and some surprisingly flashy, that blend together in a harmony tuned through eons to near perfection. Gray-squirrel tails, for example, aren’t gray at all. The individual hairs that make up the tail are marked with alternating bands of tan, black, tan, black, tan, wide black and then that silvery white tip. The searching beams of fluorescent light from my bench lamp bring out these details in the hair and lead me back to a curious age when I paid attention to those sorts of things.

I handle a few spools of various-colored thread, and they all accent the nuance of the squirrel hair. Its texture is like a silkier bucktail, which is, as the name implies, hair from a deer tail and a common ingredient of one of my favorite smallmouth bass flies: the Clouser minnow. Smallmouth bass are finning in the background of nearly every thought at my fly-tying bench. They are the objects of my fly-tying efforts.

Just down the ridge from where I squirrel hunted flows Snow Creek, one of the prettiest little mountain creeks in all of existence, and it’s full of smallmouth bass. The bass run small, but I don’t mind. It’s a nice place to visit with a fly rod in hand and a pocketful of Clouser minnows, a fly which takes its name from Bob Clouser, a Pennsylvania fly-shop owner, who designed it in 1987. Like me, Mr. Clouser was enamored and probably a little obsessed with smallmouth bass. He created his now famous pattern specifically for smallmouth bass in his home waters of the Susquehanna River. I’m considering the effectiveness of a squirrel-tail version of his iconic pattern specifically for smallmouth bass in my home waters

I clamp the vise jaws around a size 2 hook and wrap rust-brown thread around a set of dumbbell eyes (this is a metal weight that looks exactly like a miniature dumbbell and is often painted to look like eyes) until they settle firm to the hook. Then I take a flat of white craft fur and gently comb out the underfur before snipping a few long strands. Most minnows and shiners are countershaded—their bellies are lighter in color, their backs darker. When viewed from above by predators, the dark shadings tend to blend in with the rocks and woody debris of creek and lake bottoms. When viewed from below, white bellies help wash out hints of a body outline, softening the silhouette as the water’s surface diffuses sunbeams. Countershading is the foundation for much of the camouflage we see in the animal kingdom. If I wanted my creations to look natural in those clear Ozark creeks, it was best to mimic Mother Nature’s plan.

After securing the craft fur, I flip the hook in my fly vise and wrap thread around a carefully trimmed pinch of squirrel hair. A few strands of sparkling tinsel for a subtle flash of scales is the final touch on what I hope will perfectly mimic something a smallmouth bass would want to eat. Sitting on my wooden tying caddy, it looks like a darter or a minnow. It looks fishy in a good way. I think about how the squirrel tails will find their way back to the Ozarks in a slightly altered form. It’s a thought that feels so right, so perfect, so satisfying in the most primal of ways that my mind runs straight to that perfect spring day coming soon. I take a spicy sip of Tennessee’s finest and let the promise of that day guide my hands as I tie a few more.

That spring day comes sooner than expected. Wet line slips through my already water-wrinkled fingers as one, then two false casts followed by a rare nice throw plops the Clouser—my Clouser—between copper-colored boulders near the middle of an aquamarine pool. I’m at the confluence of my home waters and a smaller feeder creek. The waters mingle and unite in rain-freshened depths before surging up and over a shale overhang, then bubbling through a shoal in singularity to the next pool, the next riffle, the next shoal, the next pool and on until the creek finally relaxes into a plodding, lazy meander for its final miles to join the Arkansas River.

I’ve been here for half an hour and haven’t felt one bump. I swim the Clouser at the tip of my rod and am again impressed with its appearance. The squirrel hair looks as natural in the water as it did in the high limbs of a white oak. I cast again.

The Clouser was made for this type of fishing. Its weighted head helps it probe the depths, and its upturned hook means you can bounce it on the bottom without much fear of hanging up. I think about offering a toast to Mr. Clouser and his genius design when I get back home. But despite the fly’s best efforts, I still haven’t had a bite.

It’s still early in the year, I tell myself. The water is still downright chilly, the smallmouth’s metabolism still trying to shake off winter’s lethargy. And it’s then that I feel the gentle tug. The brown bass is just a shadow of the fighter it will be next month, but still, the energy of the mountain pulses through my fly rod with a vigor I’ve not felt since last autumn. After three short runs to the boulders, the smallmouth comes to hand, squirrelly Clouser hanging from its jaw. I admire the wildness for only a moment before releasing it back to the mountain currents. 