Smitty and the Dream Racers 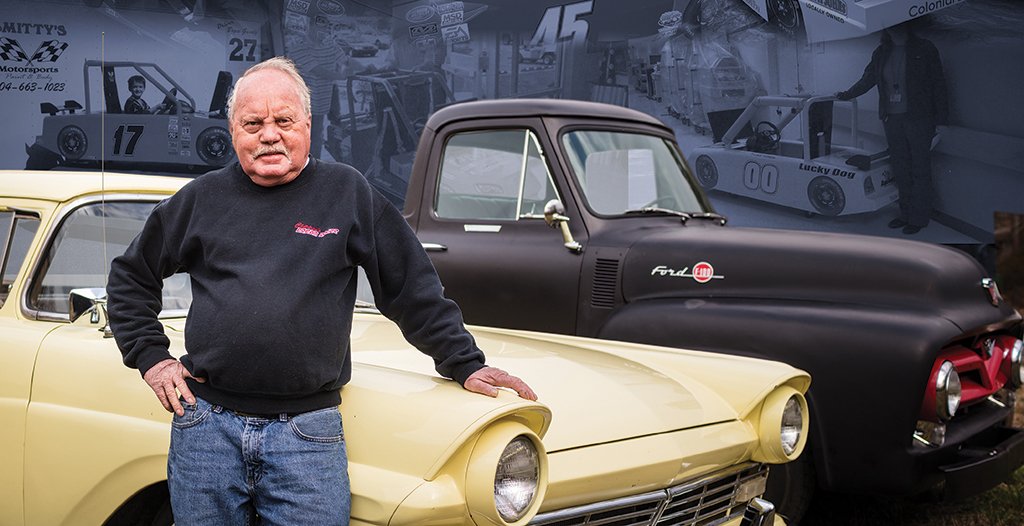 Since retiring, Mark Smith (AKA Smitty) has been hard to keep up with. After 30 years of fine-tuning the race car paint and aerodynamics for motor speedways throughout the country from his shop in North Carolina, Smitty has settled down in the Arkansas River Valley to be near his family. Though, settling might not be the right word.

You can tell right away, upon entering his shop, that he hasn’t been idling. A sleek 1948 Chrysler New Yorker convertible serves as a door greeter. Smitty has repainted and chopped three inches off the top of this huge beauty. In comparison to a GMC Sierra, this antique car is longer and wider. Smitty said the car was a pile of rust when he found it. But he got it running and added power steering and power disc brakes. It’s on track to be a showstopper when he’s done. A few feet away, a gorgeous Ford pickup truck with a matte black coat and sweet vintage interior will disarm anyone who gazes upon it.

Breaking In to Nascar

Discovered in a junkyard by Don Miller, then President of Penske Racing back in 1991, Smitty was driving a 1936 Ford three-Window Coupe at the time. Miller told him that he was building a ’35 and wanted to measure the radiator. Then Miller introduced himself. “I told him I was building a shop at home,” Smitty says. Miller offered to keep him busy. “So for 25 years, I had two or three of his cars all the time,” Smitty says. When Penske started a truck team, Smitty was asked to handle paint and body for those as well and even helped drive transport for a year.

When Penske sold the team, Smitty went back home to work on trucks. “Then here come the race cars to do at the shop,” Smitty says. “Then, here come some more. Pretty soon, I moved to town and rented a 3,000 square-foot shop. Within two weeks there wasn’t enough room. The race team next door to me, Andy Belmont, moved out with 6,000 square feet. It didn’t matter how much room we got or how many people we hired, we were promised to be busier tomorrow than we were today. It just blossomed like you wouldn’t believe.”

In the super-competitive world of stock car racing, a car needs more than horsepower and gears to compete. It needs to be slippery. “My deal was aerodynamics,” Smitty says. “In the beginning, they’d come say ‘Here’s what I want you to do, Smitty. Set that 3/8ths of an inch to the left.’ They’d give me a list of how they wanted it. And I did it. Then on Sunday or Saturday I found out how their deal worked. I learned from every crew chief what it took to make a car run fast. Plus, the Penske wind tunnel, I got to be friends with my buddies that run that. So I went up to the wind tunnel and I saw what all the rest of the crew chiefs did. I watched. I got pretty good. Especially [with]Super Speedway cars.”

The first Children’s Dream Racer began as a McDonald’s restaurant project that was determined to be too big upon delivery.

“We had an occasion to re-theme some McDonald’s restaurants,” Smitty says. “We put in mannequins, show cars, pit-carts where the side opened up and the drinks were inside. Part of what they wanted was a little race car with a carhop tray kids could have their Happy Meal in.” But when Smitty’s team delivered the car, McDonald’s determined that it was too big. “It took up too much floor space,” Smitty says. “So the little car sat and sat.” But nearly everyone who saw the tiny racer commented on how cute it was.

Then one day, Smitty’s doctor saw the little racer while Smitty was painting the doctor’s car. The doctor saw its potential as a tool that could be used to ease anxiety in young hospital patients.

“We put an IV pole on it and an oxygen bottle,” Smitty says. But that was just the beginning. “We put a Playstation under the hood, real steering and pedals, a TV monitor and a DVD player, race-car seats, safety harness, window nets, spoiler and splitter.”

It was close to a real race car in miniature — minus the real drivetrain, of course — sitting on casters with brakes.

There was only one problem: The cars, made from the same materials and with the same paint jobs as NASCAR cars, cost $10,000 to build. But they had brought so much joy to sick children that ESPN featured Smitty’s Dream Racers on a Sunday afternoon show and Smitty got to share his project with NASCAR fans.

Smitty says the harness and the G-force safety seat often bring a sense of security to children in tough spots. They helped a child who was awaiting a critical bone marrow transplant at the Charlottes Levine Children’s Hospital. The child’s mother said she really thinks she’s driving and had even begun telling her how to drive.

Smitty met the mother of another child at Piedmont Children’s Hospital in Columbia, South Carolina. “A little girl came in kicking and screaming,” Smitty says. The girl was there for a kidney biopsy but had to wait. “She played in the Dream Racer,” Smitty says. “She went in [to the procedure]. She came back out and played in it again. She told her mother on the way home that she would be glad when she came back for her operation so she could play in the Dream Racer.” 

Donors of the Dream Racers

With the Children’s Dream Racers being so costly to build, a few people of means have helped bring the cars to hospitals. Race car owner Rick Hendrick, a leukemia survivor himself, donated a fleet of Dream Racers. When Jimmy Johnson unveiled a Dream Racer replica of the number 48 car, he got to meet one of the young patients. Openly moved by the recipients of the Dream Racers, Smitty said of the children, “they’ll break your heart.”

After filming scenes for the ESPN show, Smitty said a cameraman had pulled him aside to tell him about an experience with an autistic child while filming at the hospital. The child’s mother had said the child was expressionless, that he never smiled or cried. But when he got into the Dream Racer, pretty soon he was smiling. She said it was the first time she saw his teeth unless she was brushing them.

There’s an interest in Children’s Dream Racers from those outside of racing as well. Six cars were donated by 3 Doors Down. The first went to benefit the Vanderbilt Children’s Hospital where a spokesperson said the children cannot wait to get in it. Taylor Swift contributed both a number 45 Adam Petty car and a matching pickup to Victory Junction Foundation established by Richard and Kyle Petty. Victory Junction is an entertainment park for children who are physically challenged or battling disease.

Smitty said that David Reutimann, who drove the double-zero Lucky Dog car owned by Michael Waltrip, donated the very first car to All Children’s Hospital in St. Petersburg, Florida. On the Dream Racers website, there’s a quote from Sara Barnett, a child life specialist at All Children’s: “It’s a fabulous device. It certainly makes life a lot easier. A child taking a respiratory treatment or a medicine that increases their heart rate for a short period of time, or who is sitting between prescribed intervals where blood must be drawn, or having chemotherapy [they] can cinch up the safety belts that come with real race cars and have some fun.”

At a Dream Racer dedication in Mobile, Alabama, Smitty attended a radiothon fundraiser for the hospital. The administrator suggested that Smitty speak about the Dream Racers on air. Before his time on the radio, Smitty had visited the hospital. “There was a little boy, three or four years old,” Smitty says. “He loved that Dream Racer. And, he hugged my neck… he hugged my neck so tight. So it was my turn to talk [on the radiothon], and all I could think of was that little boy. I got a lump. I couldn’t say horse hockey. I couldn’t say nothing.”

While Smitty sold his shop and came to the Arkansas River Valley, he says that the guys who worked for him still build the Dream Racers. Eighty-two cars have been placed across the country so far. Smitty says he has a lot of testimonials from doctors and play therapists about how children have benefitted from the donated cars. Right now, three more are in the shop in North Carolina, ready to be delivered to hospitals.

“All the logos and graphics are just like a real race car,” Smitty says. “When we place a donor’s Dream Racer, we place the donor’s logos, colors, graphics, all of their advertising all over the race car.” Smitty says the potential for years of advertising at no added cost on the car is a benefit to the sponsor. “It stays on there forever,” Smitty says. “It’s lifetime advertising.”

Soon after retirement, Smitty was contacted to ride along on a NASCAR tour bus as a storyteller. That assignment fit like a glove. If you’re ever in the mood to reminisce about the good old days of Nascar, Smitty has decades to pull from — stories about drivers and crew chiefs to the days of driving the transport. He also enjoys telling others about the many children he has met and helped to feel a little better during the very toughest times of their young lives.

You can read more about Smitty’s Dream Racers by visiting www.childrensdreamracer.com.