Something incredible is waiting to be known 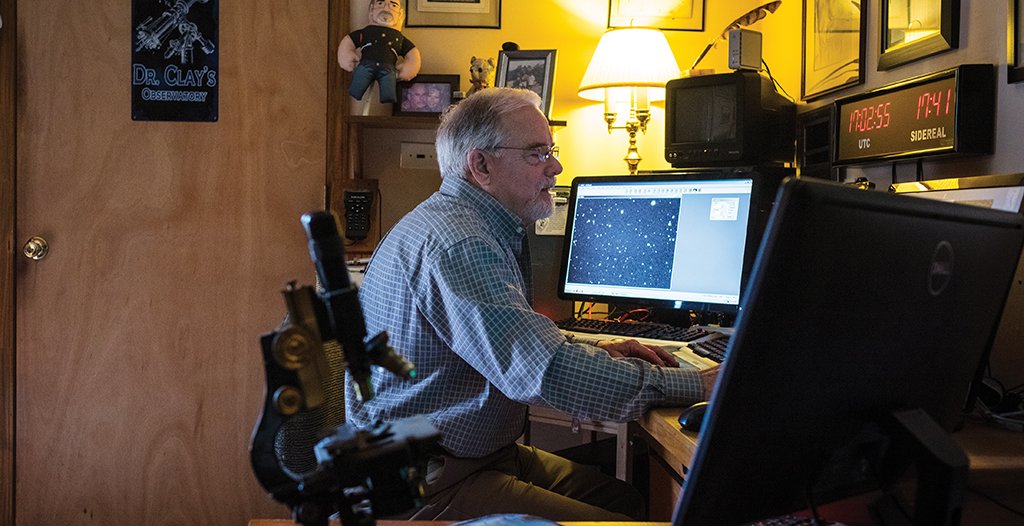 As the Mars 2020 Perseverance rover begins its mission, it is only by chance that we celebrate Arkansas Sky Observatories’ (ASO) 50th year of operation. Though, coincidentally, ASO began with observations of Mars.

In 1970-71, the first ASO facility was constructed at Edgewood Academy private school in North Little Rock to study the approach of Mars toward Earth — the closest the two planets had been to each other since 1956. “The research was to obtain detailed analysis of the clouds and seasonal changes of the Red Planet,” says Dr. P. Clay Sherrod, founder and subsequent director of ASO since its inception. Teaching at most grade levels throughout his career, Dr. Sherrod became known as “Dr. Clay” when he began teaching at the university level. “I noticed some students struggled to pronounce my last name correctly and I wanted to be remembered,” says Dr. Clay. So he instructed them to simply call him “Dr. Clay” or “Doc Clay.” The name stuck.

ASO is the oldest and most productive privately funded multidisciplinary scientific education and research institution of its type in the United States. It has proudly earned and maintained four Harvard Minor Planet Observatory Code designations as a contributor of near-Earth asteroid and comet measurements. And it has contributed more than 150,000 orbital measurements of comets and asteroids.

ASO’s first location at Edgewood Academy served as a teaching center as well as a research facility. It was at there that ASO began its affiliation with the Smithsonian-Harvard Observatories, serving as a confirmation station for the Central Bureau of Astronomical Telegrams under the direction of Dr. Brian Marsden, he of comet fame. In 1974 the ASO-Harvard affiliation was one of only a few worldwide making serious observation reports. At the time, alerts or notifications were made by phone.

The Indian Hills location was added in 1980. This observatory was for the study of novae, supernovae, and cataclysmic stars for the American Association of Variable Star Observers. At this location, everything is operated manually as it was constructed before computer technology was available.

The Conway West Observatory, added in 2000, was designed and developed to be a completely self-contained programmable robotic telescope and observatory. This included self-opening sliding roof and automatic initialization and self-functioning telescope operation, camera function, digital photograph acquisition and retention, and computer storage of analysis at any remote ASO site.

Petit Jean Mountain – North Brow, added in 2002, is used for comet imaging. This facility is 100 percent automated and is operated remotely from the main location, Petit Jean – South.

The Cascade Observatory was constructed and added in 2004 by Dr. Clay’s brother Brian Sherrod. All work on this telescope was done by the late Brian Sherrod.

Petit Jean Mountain – South, added in 2005, is the premier and primary research facility for ASO. It features on-site machining and designing workshops and two observatory buildings as well as a primary residence. The large building contains the main telescope and numerous smaller telescopes for community outreach programs.

The observatories feature climate-controlled rooms for remote viewing and operation. The telescope itself cannot be housed in a climate-controlled environment due to interference in the air currents. Astronomers of the past were exposed to the elements and stayed with the telescope throughout the night in the most extreme of temperatures, both hot and cold, to record observations with a tape recorder or pen and paper.

As technology has advanced through ASO’s history, so have the methods of data collection and transmission. “50 years ago, I would take three photographs on large sheet film of a comet moving through a star field,” says Dr. Clay. “I’d process that film, and allow it to dry, and then measure the motion through the fixed stars by hand using a light table and rulers. In eight hours I could measure no more than two comets or asteroids and redetermine the orbit. Today I can measure 150 per night thanks to digital imaging and a computer program that locks onto the sky, measures the motion for me, and automatically recomputes the orbit.”

From this laborious start, Dr. Clay’s research in many earth biological sciences, as well as his astronomical dedications and observations, led to contracts for scientific services for the Food and Drug Administration (National Center for Toxicological Research), the Universities of Arkansas, Wisconsin, Texas, Harvard, and both NASA and the Jet Propulsion Laboratories, to name only a few institutions.

Dr. Clay, an educator, and biological cellular scientist, took a unique path through the scientific disciplines making an impact in astronomy, biology, environmental sciences, geology, paleontology, and archaeology through five decades. He is known worldwide for his creative writings and lectures in the sciences. The direction of his studies was mentored and driven through the direction and research of the late Dr. Carl Sagan, of Cornell University, and he worked hand-in-hand with Dr. Brian Marsden of the Harvard-Smithsonian Astrophysical Observatory.

Dr. Sagan himself arranged for Dr. Clay to be part of NASA’s Jet Propulsion Laboratory in Pasadena, CA, as the research scientists prepared for the Mars Viking mission in 1975. This was during the same period ASO was being built. Dr. Clay turned down the opportunity, choosing to stay in Arkansas.

In a note from Dr. Sagan to Dr. Clay, he states: “Astronomy is the melting pot whereby all other sciences must simmer.” Those words from Sagan in 1974 set the foundation for ASO to never focus only on the astronomical aspects of understanding the origins of all things, but to incorporate all other sciences in concert to achieving proper understanding.

It was through the influence of these two renowned scientists that scientific contribution — rather than personal fulfillment — would be at the forefront of programs and projects at ASO. Dr. Clay set out to develop programs, research directives, and ultimately publications and theories regarding the evolution of all worlds throughout the universe based on the examples available of the biological and geological status of our planet, Earth.

Many job opportunities were offered through the years, but Dr. Clay always chose to stay in Arkansas with his family. “The void of astronomical outlets in this region led me to develop my plan for operating an exclusive observatory that was without influence and direction of others,” he says. “One thing was sure, you will never become rich being an astronomer in Arkansas.”

The reputation of ASO and Dr. Clay grew and so did his outreach programs. He sometimes gave 10-12 lectures per week across the United States and other countries. With 10,000 presentations given (free of charge), he remained reluctant to make his wealth of information available via computer. “As I explained to many people, astronomy is the gentleman’s science and deserves to remain proud of its Renaissance approach to answering the riddles of the universe,” says Dr. Clay.

Brian Sherrod was an integral part of the research and programs of ASO alongside his brother from the beginning and operated one of its telescopes until 2019. “By craft, Brian was a computer master and creative programmer who created many of the operations and analytical tools used daily by ASO,” Dr. Clay says. Brian built a website for ASO containing all of the telescope, observational data, and research guides completed and already launched. “It was, in essence, having all of my teaching tools available online at the click of a finger,” Dr. Clay says. This is the current website for ASO called arksky.org.

When asked about the most difficult period for ASO, Dr. Clay says that “life has been rich. I would not trade one thing, nor would I reverse the course of the pathways that have led me to this point over 50 years. Every year has been difficult to maintain a world-class research and outreach facility on my own with limited finances and limited time. At some point, the most difficult time in the history of ASO will be that time when I decide to shut it down and the resources and outreach that I have provided will no longer be available to the public. There will be no centennial celebration of ASO, which is so very sad. There have been so many times when I have thought about searching out a bright apprentice to take over all this, but where would I find someone who can excel in virtually every branch of science and combine all that into one thread of thought?”

Dr. Clay has written 37 books, most in the scientific disciplines of astronomy, archaeology, environment, geology, paleontology, but also a book of poetry, three books in popular philosophy and editorial thought, two novels, and a cookbook. He has authored thousands of research books and documents, made 17 Public Broadcasting Service productions, and tens of thousands of public outreach program demonstrations, lectures, and developments for schools. His audiences consist of civic and religious groups as well as and professors and academic institutions.

Dr. Clay also has two major energy/environmental inventions, both in use by the U.S. Government via the Department of Energy and Department of Defense. He says these inventions “have been instrumental in the success of ASO.”

Now retired from all but running the observatory, Dr. Clay says he is proudest of making it work for 50 years. “Secondly, I am so very proud of hundreds of students that I mentored who have gone on to work in prestigious laboratories and observatories throughout the world,” Dr. Clay says, “who still stay in touch and tell me that I made a difference in their lives.”