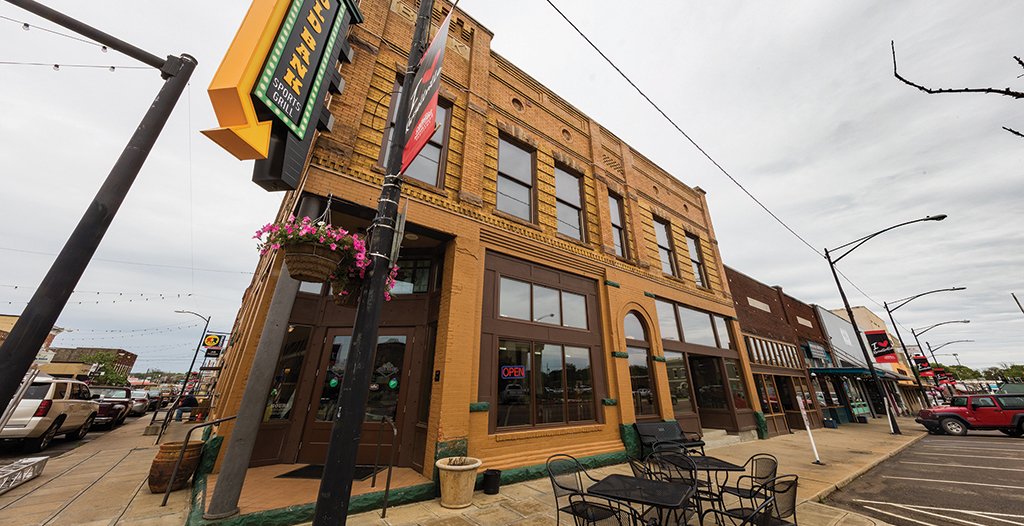 This is ABOUT’s second installment of quarterly features to the tell the stories of a few iconic downtown buildings found in the River Valley — what they once were, what they are today, and how they’ve influenced their communities. We invite you to read the history that led to the present and think on your own memories of downtown’s yesterdays. But we also hope that these pages can help you to envision downtown’s tomorrow.

The period immediately after the Little Rock and Fort Smith Railroad construction was a progressive time for Russellville The town grew quickly and established a business center. Early stores were wooden-framed buildings, but by the 1880s there were five brick buildings with one of these owned by the Harkey brothers. After the Civil War, the brothers opened a drug store on the corner where the Bank of Russellville would eventually get its start.

W. G. Weimer bought the property. In 1887 he operated a drug store, and in a section of this store, he established his bank — the Weimer Savings Bank. T.M Neal took over the bank in 1897, and he and Weimer organized the Bank of Russellville.

For nine years the Bank of Russellville became a central player amid the progress and organization of the town. The wealth of coal mines, cotton farms, and timber enabled Russellville to build wells with hand pumps, an electric light plant, some paved streets, an ice house, a livery stable, and other businesses as the town became the center of trade,

When the Russellville Ice Storage Plant caught fire, the townspeople used water from a cistern, and a bucket brigade was formed to put out the fire. Immediately afterward, the community began organizing a fire company. At the following town meeting, fire-fighting methods and equipment needed were discussed, and equipment was ordered. But on January 16, 1906, before the new equipment arrived, most of the business district of Russellville was lost to a historic fire. Twenty-three buildings were in ashes at an estimated cost of $250,000. Among the losses was the Bank of Russellville. The vault was the only thing that remained.

The Bank of Russellville was one of the businesses that quickly rebuilt after the fire. And the first customers in the new bank must have felt like royalty as they walked along the polished marble floor and under the silver patterned ceiling on their way to the teller. Their money was secure in the very vault that had survived the fire, and they themselves felt safe because above the tellers on the second floor, guards peered through the metal railings, overseeing their transactions.

The two-story brick building has rustic stone above the second-floor transom windows and the rounded arched first-floor entrance, and it features a slight Romanesque Revival style influence with parapet detail variations common to early 20th century commercial architecture. The bank remained in the building until 1960 when it moved to Second and Denver.

Right next door, and also built in the early 1900s, the Smith Shoe Store was located in what was previously an alley. This two-story brick building had an irregular trapezoidal plan. The building is wider in the front and narrows at the rear. The sides of the building square up with the adjoining buildings. The roof was flat with a parapet. It originally had an awning across the front of the building. It was built in the 20th-century commercial style.

East of the bank building, in the early 1900s, was Wiggs and Jenkins Drug store, owned by R. L. Jenkins. It was a one-story frame construction with brick wall material and a flat roof. It had a central entry point on the sidewalk and a cast concrete sign on the top of the building “19 Jenkins 24.” This building was originally constructed in 1906, immediately after the 1906 fire. In 1924, the building was extensively remodeled. S. A. Walker bought this property and it became Walker’s Drug Store until the mid-1960s. Ivan Rose and Larry Sparks, both pharmacists, bought and ran a pharmacy. Then, in 1970, Billy Newton, a recent pharmacy school graduate at the time, bought 50 percent of the pharmacy and changed the name to Newton’s Pharmacy. Newton eventually bought the rest of the pharmacy and remained there until he moved to his new location in 1986. Newton rented the pharmacy for several years, but it became vacant in 2014.

Not long after Newton learned of the historical renovation federal and state tax credit programs and help offered by the Federal Government to renovate historic properties. He thought the incentives were good for a renovation. Newton owned three properties: the Bank of Russellville building, located at 218 and 220 West Main, the Jenkins Building (Annex) located at 216 West Main, and The Smith Shoe Store (barbershop), located at 106 N. Commerce. The buildings were to be combined into one project. However, each of the building’s renovation had to be approved for historical accuracy as they were all part of the Russellville Downtown Historic District.

The renovation began by gutting all of the buildings and the extensive changes included: All electrical and plumbing systems were replaced. The roofing was completely removed and replaced with new material. A new forced-air heating and air conditioning system was installed. The marble floor area, a large skylight, and the original metal stair railing on the second floor were all repaired and restored. The front entrance was repaired and rebuilt to the originally existing storefront in 1906. The original patterned tin ceiling tiles were repaired and matched for new installation in adjoining areas. New aluminum-clad wooden transom windows were installed. Soundproof insulation was installed in the walls, ceilings, and skylight. An etched glass feature was added to the entrance door. A handicap entrance was added and an elevator for wheelchair access to the second floor. A fire exit was added. Steel support archways were added on the second level to allow a view through the dining areas to the stage. Two stairways were restored with new railing and a stairway was added in the kitchen for access to the second floor. Arched cased openings were cut through the existing walls of the adjoining businesses to the bar. Original exposed brick walls were repaired. Existing bathrooms were removed and nine new bathrooms were installed. Laminate flooring was installed over the concrete floors. The original bank vault was restored by Sam Hindsman and is featured upon entrance to the bar.

“One of the ‘wow’ factors were the windows,” Newton says. “There were arched ones that had been bricked over.” These were restored in the renovation. Another interesting holdover from the old days was the floor. “We kept the original marble floor from the bank and restored it,” Newton says.

Bob Hiegel, the project’s Architect recalled that the electrical work was heavily modernized. “We used nearly two miles of low-voltage wiring to accommodate the televisions, phones, fans, and lights,” Hiegel says. The new system allowed all of the elements to be controlled remotely by phone.

The Old Bank Sports Bar (not the Old Bank building) is currently operated by co-owners Chris Delre and Doug Burnett. The two have decades of experience as owners in the foodservice industry. The renovated bar features three levels of dining, three full bars, and two performance stages. There are 60 televisions and a projection screen to allow diners to watch sports and the bands without obstruction. There is also a members-only private club with luxury accommodations. The club room has a mural named The Timeline of Russellville painted by artist Sherry Trusty.

For more information about the Bank of Russellville go to russellvillearkansas.org and search for Russellville Historic District.